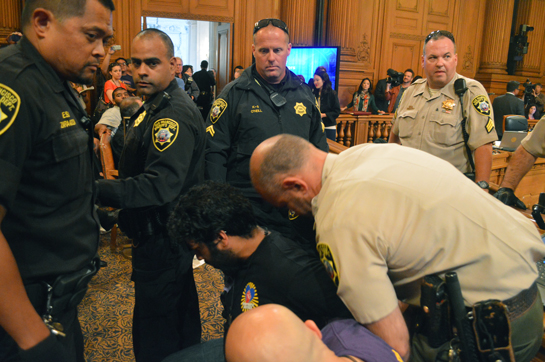 Nearly 100 nonprofit workers and their allies, hungry for a raise, marched through the corridors of City Hall today and shouted down the Board of Supervisors at its weekly meeting. “Supervisors can’t you see? Inequality is killing me!” the protesters shouted at the board. Protesters linked arms across the wooden barricade between the supervisors’ seats and the audience, and 11 were detained for their act of civil disobedience.

The nonprofit workers are taking aim at Mayor Ed Lee’s proposed budget, which gives the workers a 1.5 percent cost of living funding increase they say is not enough to offset rising rents, healthcare costs, and other expenses in San Francisco. After doing the math, they say, for-profit contractors are getting as much as a 3 percent boost, which they’re calling a double standard.

Mostly, the workers are feeling exhausted and underpaid. Darien Lomeli, a counselor at Progress Foundation’s Rypins House, helps mentally ill seniors connect with housing services and navigate exceedingly low incomes — but now she says she’s facing those same hurdles herself. Last year, she finally got a 1.9 percent raise, but had no raises at all for over six years.

“We can’t survive on what we’re paid,” she said. Lomeli grew up in San Francisco but was priced out to Redwood City some time ago.

Raw video clips of the nonprofit workers’ Board of Supervisors action today. Alysabeth Alexander of the SEIU is the first speaker, shortly before 11 protesters were cuffed (with plastic) and detained.

But it’s not just about individual challenges, she said, low pay engenders high turnover in the nonprofit sector, which hurts those she helps. “The turnover rate,” she said, “is skyrocketing.”

The homeless seniors she works with need help from people they trust. Navigating services is also exceedingly difficult for trainees, and constantly training new workers is a drain on resources, she said.

Sup. David Campos told the Guardian a cost of living adjustment for nonprofit workers was on the table during budget negotiations, but was eventually dropped. Now he and Sups. Eric Mar and Norman Yee are working on a solution.

“It’s just a conversation at this point,” Nick Pagoulatos, an aide to Mar, told the Guardian. More research needs to be done to find the dollars in the budget that could go towards the funding increases, which the SEIU estimates would cost somewhere near $6.8 million annually. “The timing of when or if [an increase] could move forward is up in the air,” Pagoulatos said.

Cost of living is just the latest in a series of fiscal hits the nonprofit sector has taken to the chin in San Francisco of late. The tech sector boom downtown and in South of Market have raised the rents on many surrounding nonprofits, which some have said led to the closure of over 1,000 nonprofit agencies in San Francisco since 2011. Mayor Lee and the board provided $4.5 million in the 2014-15 budget to offset rent increases for nonprofits in the city.