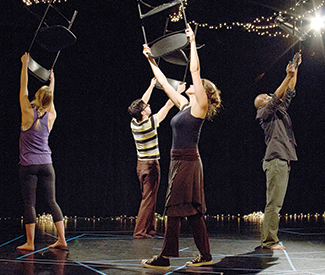 DANCE Visiting from Los Angeles, the Berkeley-born Arianne MacBean introduced the Bay Area to her Big Show Co. via two works. The elaborately titled The People Go Where the Chairs Are dates from 2012; the more condensed present tense was a world premiere. Both pieces intrigued by putting on stage the process the artists go through trying to give life and shape to something inchoate.

For MacBean, for whom language is integral to her dance-making, the challenge was that words both embody but also confine meaning. This intrinsic but probably unsolvable conundrum is at the base of the quirky, often equally funny and poignant People.

People is more language-based than movement-oriented, and it did suffer from the same disadvantages as many such works. Dancers in general still are not adequately trained to communicate verbally. People’s dancers for the most part did well, but perhaps some unobtrusive body mics might have helped.

As we walked into the theater, performers blocked the stage into a set of overlapping squares. Somewhere off stage, a pianist plinked down isolated notes. One of the dancers wrote down an Alcoholics Anonymous-style 12-step scenario, whose items were erased as accomplished throughout the evening.

As the lights went down, each dancer grabbed a folding chair; rather than being shaped into a “dance,” the chairs were used to bring about collisions, bad feelings, and chaos. So they started over, chattering heatedly about finding an inspiration. Pina Bausch tops the list; however, she is dead. Something like “the dance” will have to do. This brainstorming session about meaning, inspiration, essence, and genuineness was hilarious, and yet almost unbearable to sit through.

Concrete suggestions fall flat. Angelina Attwell demonstrates “a dance I once saw;” it was fierce and left her spent, which scared the rest of them. Later, she had an I-hate-dance moment in which, assisted by her colleagues, the chairs started flying and crashing around her. All joined Max Eugene’s free-for-all, but they could never actually put a “joyous” dance on stage. Eugene’s lack of comprehension and his colleague’s disdain of spontaneous expression spoke volumes about ingrained attitudes in the dance world.

Genevieve Carson’s witty monologue, shadowed by gesticulating males, took on how choreographers use dancers’ contributions to fill transitions. It probably struck a nerve among the dancers in the audience.

Smaller, quieter moments didn’t need language. Challenged to be “genuine,” Eugene simply stood and looked into the audience until his fearful colleagues joined him. There was also a point when the audience was supposed to “participate,” and the dancers leaned on chairs, whispering, inviting us but knowing full well that nobody would step up.

In the serious yet entertaining People we see the dancers both as performers and the people they are, or at least the personas they assumed. Their bravery, their struggle, their anger, and their sense of being in this together despite the odds was something that spoke clearly and effectively.

present tense was a much quieter but also more tightly constructed work in which each moment seemed full of portent. The title, as an intermission discussion between choreographer MacBean and ODC Deputy Director Christy Bolingbroke pointed out, refers to the present moment, but also to the intense presence that is required in a performance.

Verbal language entered here as fragmentary phrases or single words, which acquired meaning in the way they are spoken, screamed, thrown about, casually chained to each other. At one point they simply disappeared into sound that is part of pure physical frustration.

In the opening passage, both Eugene and Carson seemed encased in their own worlds. He stood, and in Butoh-like fashion incrementally opened his arms and shifted his balance ever so slowly. You had to keep looking to see the moves. In contrast, the robotic Carson jerked herself like a mechanical doll onto the ground and up again. Attwell and Brad Culver slowly worked their way across the stage on their backs. The contrast between vertical and horizontal planes suggested a self-contained space that changed very slowly. But then these isolated beings tried to connect, and raced around trying to catch a hand like a lifeline. In twos, they were restrained even as they reached out. That section went on too long. Despite the constant shifting of partners, these parts did not accumulate. More effective was they way they shouted fragments, or single words that would make a sentence, at each other. It all started with Attwell’s silent scream. *