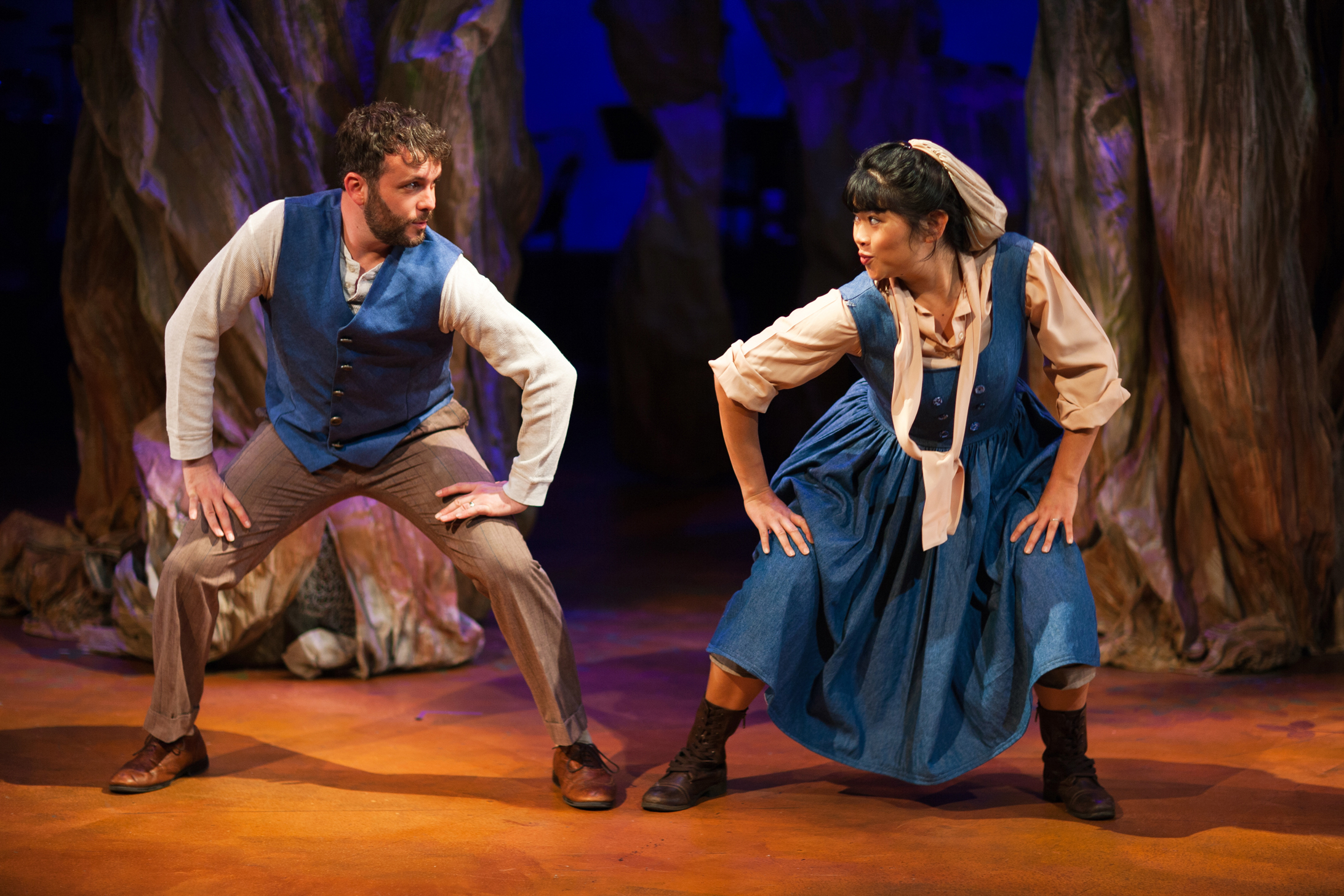 Given all traditional parameters of critical experience, SF Playhouse’s production of Into the Woods (now playing through Sept 6) should be at least somewhat irksome. The vocal talent can be inconsistent, the accents are ambiguous, the set looks busy, and the musical is high-strung enough that it can be insufferable without expert work on all fronts. Shockingly, despite the surface-level issues, the Playhouse production is an unqualified technical success and a complete joy to take in.

The watchability may result from the impeccable staging and verbal interplay between the actors, or the reliable and often gorgeous small orchestra that accompanies the singing. Or perhaps the musical’s hilarity comes from the Robert Goulet-esque swagger of the dual princes and the coy and satirically sexualized awakening of Little Red Ridinghood. Or maybe the show is so good because, in addition to his expert instrumental direction, music director Dave Dobrusky helps his cast find their vocal strengths — the entire ensemble navigates the passaggio-shredding score with astonishing tact. All these positives combine to make Into the Woods an atmospheric journey more than worth taking.

Stephen Sondheim and James Lapine’s 1986 work has aged majestically. The book avoids any hint of contemporary cultural referentiality, giving the work a timelessness and broad humor that seems just as applicable in the millennial age as it was 30 years ago. Gender expectation, the limitations of heroics, and the predictability of children’s stories are all over the 2014 liberal zeitgeist and all play big thematic roles in the production.

Sondheim and Lapine manage to boil down these issues to atomic levels — Ridinghood’s titillation at the lascivious Wolf’s advances, Jack’s clueless but powerful desire to traverse the world of the giants, and the witch’s overprotectiveness over Rapunzel all explore basic yearnings and are remarkably Freudian in scope. It’s no wonder that Disney is releasing a blockbuster version of the musical this December.

The plot is a flimsy excuse to combine the stories of Cinderella (Monique Hafen), Rapunzel (Noelani Neal), Jack and the Beanstock (Tim Homsley), and Little Red Ridinghood (Corinne Proctor) into a single entity. A Baker (Tim Pinto) and his Wife (El Beh) are victims of an infertility curse at the hands of a vengeful witch (Safiya Fredericks) and the very convenient antidote is to steal items from each of the other Brothers Grimm icons.

Despite the storyline’s more contrived elements, Sondheim and Lapine, in typically sophisticated fashion, fill the show with fast-talking, convoluted numbers and twists that require actors capable of sudden and realistic emotional shits as well as deft pronunciation. Not one of the lines in the show was garbled or dropped, nor did any of the sudden shifts cause interruptions in the emotional momentum of the piece. For a Sondheim piece, this is an impressive achievement — I hate to think how many run-throughs some of the more word-heavy interchanges took. Whether to credit this more to Dobrusky or director (and Playhouse co-founder) Susi Damilano is unclear, but they both deserve extensive kudos for the verbal and emotional clarity of the play.

Chiefly responsible for this are Hafen’s Cinderella and the Pinto and Beh’s Baker couple, who have the least flashy parts in the production and need to act as its emotional center. Hafen is the stand-out, with a beautiful coloratura voice that floats up effortlessly to the higher notes in her melancholic “Cinderella at the Grave” and the conflicted “On the Steps of the Palace.” She moves with authenticity and humbleness — she never eats scenery or overdoes anything, which allows the other actors to be more flamboyant. Her evasion of the Baker’s Wife’s questions about her courtship with the Prince is a revelatory moment.

Pinto’s Baker is equally full of humanity. He has to deal with the most opposition and tragedy throughout the narrative and retain the full sympathy of the audience —any garish showboating and nobody cares about his trials anymore. Pinto utilizes his creamy baritone voice and telling body language to field an incredibly likable performance.

El Beh is more dynamic than Pinto, but also less consistent. Her decidedly clipped and modern delivery clashes with his more Victorian dictation and some of her more tender moments come off a bit contrived. At her best though, she delivers powerhouse belting and charged emotive complexity that nicely counters Pinto’s down-to-earth style.

Fredericks is another vocal star as the witch. She has both the fastest (her part during the “Prologue”) and slowest (“The Last Midnight”) songs and manages to carry both — her diction is crisp without sounding contrived, her pitch is accurate without sounding clinical, and her intensity is undeniable.

Cinderella’s Prince and Rapunzel almost steal the show and don’t seem like supporting cast members at all despite their slightly briefer stage time. The Prince (Jeffrey Brian Adams) is a delightful archetype; a square-jawed, Jon Hamm look-alike who charms his way into the heart of Cinderella before realizing that he is addicted to “the rescue” of princesses. He hams it up to an extreme degree, but does so with a charming degree of self-referentiality. His vocals and timing in “Agony,” in which he bemoans the elusiveness of the princesses with Rapunzel’s Prince (Ryan McCrary, who is also solid) were perfection and his seduction of the Baker’s Wife in “Any Moment” is truly inspired Space Age Bachelor Pad-esque sexual panache.

Noelani Neal’s Rapunzel has a gorgeous tone, which she shows off during a tongue-in-cheek reoccurring vocalise that could easily have been shrill. Sadly, she fades into the woodwork a bit as the play goes on. When she’s on stage, however, she owns it, and I’m sure she will be in lead roles at the Playhouse and elsewhere before long.

The ensemble enthusiasm, also increased by the every-fiery local theater legend Maureen McVerry as Jack’s Mother and Homsley’s doe-eyed but mostly relatable Jack, carries through the play’s almost three-hour running time. Even as the unnecessarily trite and sappy ending begins to take shape (no fault of the production, just a rare miscue by Sondheim and Lapine), the chemistry and focus onstage is still palpable. All of the detractions alluded to earlier are still detractions — the set could use more space, there could have been a more unified dialect, and the frenetic action of the play is sometimes overwhelming in the weaker moments. The heart of the production, however, makes it irresistible and sure to fill seats throughout its lengthy run.