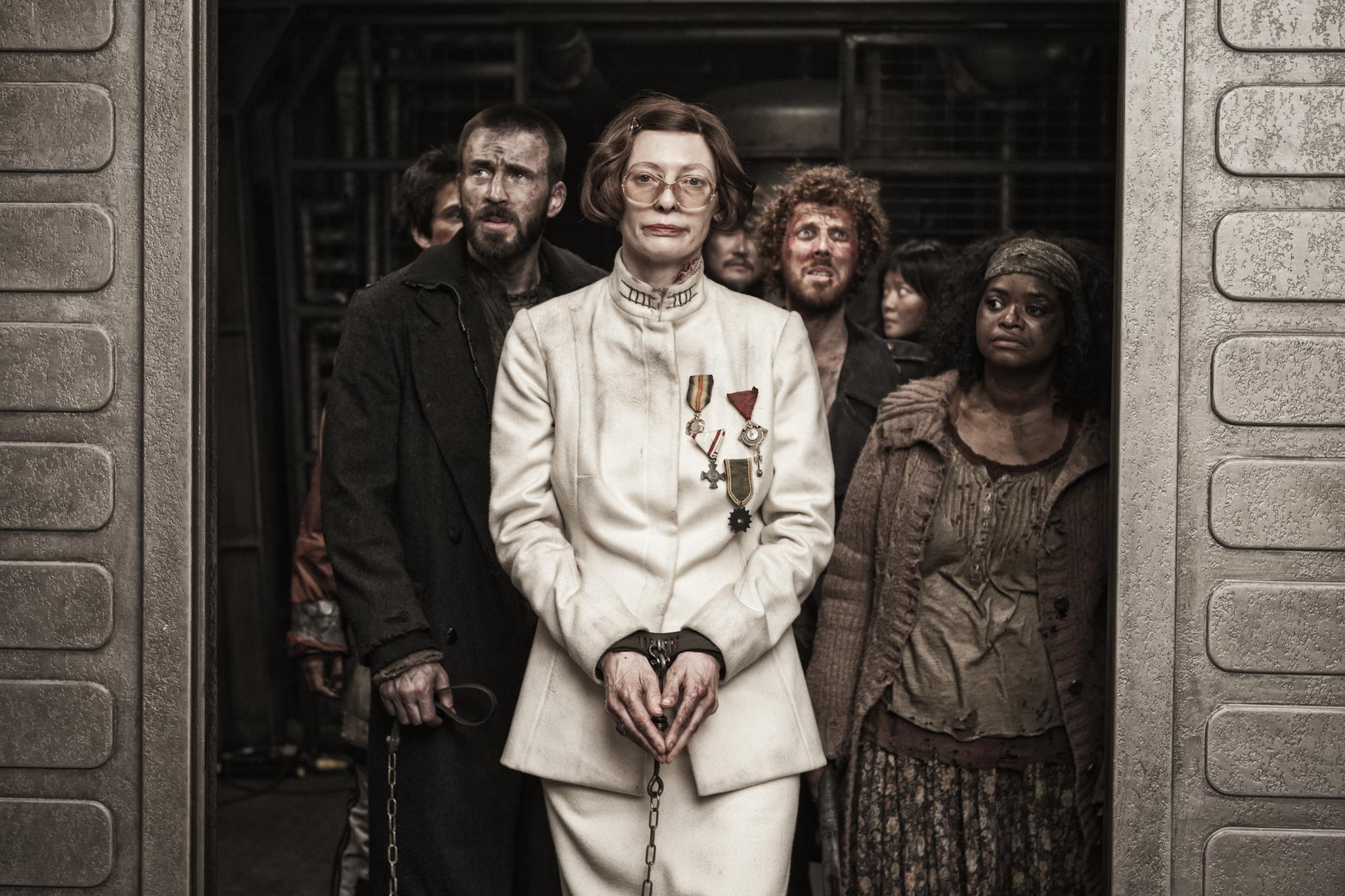 This week, Frameline continues (our coverage here!), plus offbeat sci-fi winners Coherence and Snowpiercer are well worth seeking out … especially if you’re not in the mood for more giant robot smash-ups from the Michael Bay factory. Plus: new docs and more! Read on.

Breathing Earth: Susumu Shingu’s Dream Japanese artist Susumu Shingu has built his career through his concerted engagement with the natural world. The wise and eternally smiling 75-year-old creates angular and often gargantuan mobiles that harness the power of wind and water to gyrate in ever-changing directions. In Breathing Earth, German director Thomas Riedelsheimer crafts a deliberately paced rumination on Shingu’s life philosophy that, while devoid of the frenetic facts, figures, and trite biographical rehashes that punctuate hyper-informative pop-docs, uses a beautifully simplistic narrative arc to illuminates Shingu’s attempt to create a hilly, open-air collection of windmills. The sculptor’s impassioned narration and charming conversations with potential landlords and investors (who usually entirely miss the point of his mission to raise environmental consciousness through aesthetic beauty) make Shingu impossible not to fall in love with — he is laid-back, funny, and astonishingly youthful. Riedelsheimer’s camera is similarly relaxed, gliding sumptuously over the green and wild landscapes on which Shingu installs his works. Despite his meditative tempo, Riedelsheimer manages to explore a remarkably wide scope; Shingu’s late-life marriage to a fellow sculptor, his appeals to both Japanese and German schoolchildren to care for the earth and help to avoid environmental disasters, and his intricate technical processes all receive intimate and inspiring sections. (1:37) (David Kurlander)

Citizen Koch After quietly influencing conservative ideology, legislation, and elections for decades, the billionaire industrialist Koch brothers have found themselves becoming high-profile figures — much to their dismay, no doubt. The relative invisibility they hitherto enjoyed greatly abetted their impact in myriad arenas of public policy and “popular” conservative movements. Look behind any number of recent red-vs.-blue flashpoint issues and you can find their fingerprints: Notably state-level union busting; “smaller government” (i.e. incredible shrinking social services); seeding allegedly grassroots organizations like the Tea Party; furthering the Corporations = People thing (see: Citizens United); and generally helping the rich like themselves get richer while fostering working-class outrage at everybody else. This documentary by Trouble the Water (2008) co-directors Carl Deal and Tia Lessen touches on all those matters, while also focusing on Wisconsin as a test laboratory for the brothers’ Machiavellian think-tank maneuvers, following a Lousiana GOP candidate on the campaign trail (one he’s marginalized on for opposing corporate influence peddling), and more. Any one of these topics could support a feature of their own (and most already have). Citizen Koch’s problem is that it tries to encompass too much of its subjects’ long reach, while (despite the title) leaving those subjects themselves underexplored. (It also suffers from being a movie completed at least 18 months ago, a lifetime in current US political terms.) For the reasonably well-informed this documentary will cover a lot of familiar ground—which is not to say that ground isn’t still interesting, or that the added human interest elements don’t compel. But the film covers so much ground it ends up feeling overstuffed and unfocused. (1:26) (Dennis Harvey)

Korengal This companion piece to 2010’s Oscar-nominated Restrepo — one of the best docs about modern-day warfare to date, offering unfiltered access to an Army platoon stationed in Afghanistan’s Korengal Valley — uses previously unseen footage shot during the year filmmakers Sebastian Junger and Tim Hetherington spent shadowing their subjects. Korengal is structured as a more introspective work, with musings on what it feels like to be a soldier in the Korengal, surrounded by rough (yet strikingly beautiful) terrain populated by farmers who may or may not be Taliban sympathizers, not to mention unpredictable, heavily armed opponents referred to simply as “the enemy.” Interviews reveal sadness, boredom, a deep sense of brotherhood, and the frustrating feeling of going from “100 miles an hour to a dead halt” after the surreal exhilaration of a firefight. Korengal also functions as a tribute to Hetherington, who was killed in 2011 while on assignment in Libya. Not only does his death add a layer of poignant subtext, it also suggests why Junger felt moved to revisit this story. That said, though Korengal‘s footage is several years old, its themes remain distressingly timely. (1:24) (Cheryl Eddy)

Snowpiercer Eighteen years after an attempt to reverse global warming has gone wildly awry — freezing all life into extinction — the only known survivors are on a one-of-a-kind perpetual-motion train that circles the Earth annually, has its own self-contained ecosystem, and can smash through whatever ice buildup has blocked its tracks since the last go-round. It’s also a microcosm of civilization’s worst class-economic-racial patterns over history, with the much-abused “tail” passengers living in squalor under the thumb of brutal military police. Unseen at the train’s front is its mysterious inventor, Wilford, whose minions enforce “Eternal Order Prescribed by the Sacred Engine.” Curtis (Chris Evans) is default leader of the proletariat’s latest revolt, in which they attempt to force their way forward though the prison section (where they free Song Kang-ho and Go Ah-sung as the train’s original lock designer and his psychic daughter) on to the wonders of the first class compartments, and beyond. This first (mostly) English-language feature by South Korean Bong Joon-ho (2006’s The Host, 2009’s Mother), based on a 1982 French graphic novel, starts out as a sort of locomotive, claustrophobic Mad Max (1979) variation. But it gets wilder and more satirical as it goes along, goosed by Tilda Swinton’s grotesquely comic Minister Mason, and Alison Pill as a teacher propagandist in a particularly hilarious setpiece. In case the metaphor hasn’t already hit you on the head, one character explains “The train is the world, we the humanity.” But Snowpiercer’s sociopolitical critique is as effective as it is blunt, because Bong handles everything here — visceral action, absurdist humor, narrative left-turns, neatly etched character archetypes, et al. — with style, confidence, and wit. Some of the FX may not be quite as seamless as it would have been in a $200 million Hollywood studio production, and fanboys will no doubt nitpick like nitwits at various “credibility gaps.” (As if this movie ever asks to be taken literally.) But by current, or any, sci-fi action blockbuster standards, this is a giddily unpredictable, risk-taking joy. (2:07) (Dennis Harvey)

Third Person A screenwriter, Paul Haggis, pens a script in which a novelist (Liam Neeson) sits alone in a smoke-filled hotel room in Paris struggling over a manuscript about a novelist who can only feel emotions through his characters. What that psychic state would actually look like remains unclear — when the woman (Olivia Wilde) he’s left his wife (Kim Basinger) for shows up, their playful, painful, fraught interactions reveal a man with above-average emotional reserves. Meanwhile, in another hotel in another city, Rome, a sleazy fashion industry spy (Adrien Brody) finds his life turned sideways by a seemingly chance encounter in a bar with a beautiful Romanian woman (Moran Atias) in dire need of money. And in a third hotel, in Manhattan, a young woman (Mila Kunis) cleans up the suites she used to stay in when she was married to a renowned painter (James Franco), with whom she has a son she may or may not have harmed in some terrible way. The film broadly hints at connections between these three sets of lives — in each, the loss or endangerment of a child produces an unrelenting ripple effect; speaking of which, objects unnaturally submerged in water present an ominous visual motif. If the movie poster doesn’t give the game away as you’re walking into the theater, the signposts erected by Haggis ensure that you won’t be in the dark for long. Learning how these characters relate to one another, however, puts considerable drag on the fabric of the plot, exposing the threadbare places, and where Haggis offers his tortured characters redemption, it comes at the cost of good storytelling. (2:17) (Lynn Rapoport)

Transformers: Age of Extinction In Michael Bay’s fourth Transformers installment a villainous Black Ops leader (Kelsey Grammer) allies with a snarky Steve-Jobs-alike (Stanley Tucci) to build Transformers de coeur: designer impostor robot-cars they hope will reinvent the face of war. In IMAX 3D, “TransFOURmers” is packed with relentless rock-‘em-sock-‘em action, spectacular property destruction, and about as much sense as a bucket of worms. After 60 minutes, you think you’re getting more than your money’s worth. At 90 minutes, you’re tired. At two hours, confusion sets in: If Autobots get stronger together how could Optimus be in so much trouble? Who is the bounty hunting Terminator lookalike? HOW MUCH MORE COULD THERE BE? And then … the action shifts to China, Optimus rides a Dinobot, and chaos reigns. I’ve always liked the working-class poetry of the Transformers themselves — the leader is a trucker and the cast is stacked with ambulances, tanks, and the metal workforce that preserves American lives. If that’s not traditional hero worship, I don’t know what is. But Age of Extinction is the soulless designer imposter it lampoons — the whole sequel-snarking ordeal makes you long for Buzz Lightyear, who saw a thousand Buzz Lightyears on a store shelf and survived that existential crisis heroically — while also riding a dinosaur and fighting Frasier. This Transformers movie (sadly, it won’t be the final one) starts with a thesis: Mark Wahlberg walks through an abandoned movie theater and a Wilford Brimley twin (Ron Shedd) bellows: “Movies today! Sequels! Remakes! Crap!” Age of Extinction follows that moment with nearly three hours of evidence that the cause of extinction is redundancy. (2:30) (Sara Maria Vizcarrondo)

Under the Electric Sky Hey, raver! This 3D concert film enables you to experience the Electric Daisy Carnival without punching any holes in your brain. Or, y’know, dying. (1:25)

Violette Taking on another “difficult” woman artist after the excellent 2008 Séraphine (about the folk-art painter), Martin Provost here portrays the unhappy life of Violette Leduc (Emmanuelle Devos), whose fiction and autobiographical writings eventually made her a significant figure in postwar French literature. We first meet her waiting out the war with gay author Maurice Sachs (Olivier Py), one of many unrequited loves, then surviving via the black market trade before she’s “discovered” by such groundbreaking, already-established talents as Jean Genet (Jacques Bonnaffé) and Simone de Beauvoir (Sandrine Kiberlain). It is the latter, a loyal supporter who nonetheless retains a chilly emotional distance, who becomes bisexual Violette’s principal obsession over the coming 20 years or so. Devos does her best to portray “a neurotic crazy washed-up old bag” with an “ugly mug” — hardly! — who is perpetually broke, depressed, and awkward, thanks no doubt in part to her mean witch of a mother (Catherine Hiegel). “Screaming and sobbing won’t get you anywhere,” Simone at one point tells her, and indeed Leduc is a bit of a pill. For the most part lacking the visual splendors of Séraphine (this character’s environs weren’t so pastoral), Violette is finely acted and crafted but, like its heroine, hard to love. (2:18) (Dennis Harvey)