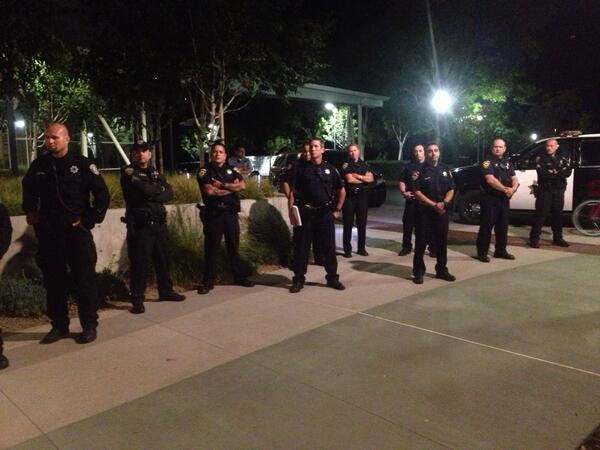 Last night [Tues/24], a small group of protesters fighting for free speech on the Internet were arrested at Google’s Mountain View campus. The group is calling for a nation Internet blackout campaign on July 15 to demand the Federal Communications Commission solidify net neutrality.

Sgt. Kurtis Stenderup of the Santa Clara County Jail confirmed 10 protesters were arrested last night, and he indicated some may still be detained. “Most of the arrests were cited out for the trespassing charge,” he told us. “However, some arrests had outstanding warrants so I will have to look into their status.”

For the uninitated, the FCC recently proposed “fast lanes” for the Internet, which many allege would create a two-tiered access to Internet Service Providers’ pipelines. Having distributors of content (like Netflix, news websites, or individuals) pay for more bandwidth to distribute over broadband would stifle free speech, many allege, instead advocating a concept known as net neutrality. Basically, free speech is guaranteed by equal access, but those who control that access want to slap a price tag on distribution on the internet.

Though Google’s mantra, “don’t be evil” seems like a no-brainer, the protesters allege Google has only taken token gestures to address net neutrality. A damning report by the San Francisco Chronicle showed Google only spent about $280,000 in political contributions to sway regulators to maintain net neutrality (with their other net neutrality advocates’ money adding up to $600,000 spent). Conversely, the telecom industry (AT&T, Comcast and others) spent over $2 million to sway lawmakers to favor giving them more control over who pays for access to Internet usage.

They protesters believe Google should take the lead in the fight for net neutrality. From the group’s website:

“In 2012, Google created a petition as part of a campaign against the Stop Online Piracy Act and the Protect Intellectual Property Act that collected over 7 million signatures. The massive online resistance in opposition to these two monstrous bills stopped them from becoming a reality.

Today, the Internet is once again under attack, this time by ISP’s who wish to capitalize on content providers and eliminate net neutrality. Though Google and other major companies such as Netflix, Amazon and Microsoft have come out in support of preserving a free and open web, we believe much more can be done.

Though many of us have concerns about the larger implications of Google’s effect on the world, as far as surveillance and ties to military technology, we are not here to protest Google.

Google, with its immense power, has a social responsibility to uphold the values of the Internet. We encourage Google to engage in a serious, honest dialogue on the issue of net neutrality and to stand with us in support of an internet that is free from censorship, discrimination, and access fees.”

At yesterday’s protest, 20 or so occupiers set up camp at Google HQ to convince the Googlers to take the lead on net neutrality. But as night fell, the Mountain View Police Department informed them it was time to leave.

A live video stream aired by Twitter user and Occupier @punkboyinsf revealed the conversation between police and protesters, which was mostly orderly, but the cops couldn’t see the protesters’ perspective. “We’re supporting them, we want them to support us,” one protester told police. One officer answered, “If you want to partner with them, just leave. Try to contact them tomorrow.” Peacefullly, almost pleadingly, one protester said “we just want to rap with them.”

At about 11pm, officers announced they’d make arrests. As @punkboyinsf caught the action on camera from a distance, an officer nabbed him as well. The occupier asked if he could at least put his camera in his bag, to which the officer replied “sir, it’s too late.  Just relax, just relax,” and arrested him. @PunkboyinSF was one of the protesters released earlier this morning, he tweeted, and now the story has spread worldwide.

Seperate and loosely related protests outside Google’s I/O conference in San Francisco today are ongoing as of this writing. When we asked Mountain View Police Department spokesperson Saul Jaeger if the arrests were motivated by the MVPD, or because of a request from Google, Jaeger replied, “it was Google’s call.”

The protesters are calling for a national day of action on July 15, the end of the FCC’s public comment period on net neutrality. An Internet blackout campaign modeled after the anti-SOPA/PIPA online protests that managed to preserve Internet freedom in the past. Specifically, they wrote, they urge websites to do the following:

“Blackout their entire website for a day, replacing it with an info link to petitions and the FCC comment page.

Add a button to their website connecting users to information and petitions online.

Create their own creative way to connect their users to this issue and how to fight back.

We are committed to occupying the Google Headquarters until the company gets involved in honest dialogue on net neutrality, and until real action is taken to maintain a free and open internet.”

To his credit, Mayor Ed Lee recently championed net neutrality at the recent Conference of Mayors, this Monday. His resolution to urge the FCC to enshrine net neutrality as a right was signed by New York City Mayor Bill DeBlasio and other mayors across the country.

“Net neutrality is critical for an innovation economy to thrive, because if the broadband companies could choose what web pages you can access, the Internet would lose its power as the most powerful communication tool we’ve ever known,” said Mayor Lee, in a press statement. “I am grateful to my cosponsors and the U.S. Conference of Mayors for adopting principles of a Free & Open Internet as the official policy of America’s Mayors. We believe in transparency and comprehensive non-discrimination, and we will fight for these values as the FCC writes regulations in the coming months. There are serious implications for commerce and democracy, and we’re making sure U.S. cities have a voice in this fight.”

It looks like Lee has a lot in common with the Occupy Google protesters.

Below we’ve embedded the arrest of @punkboyinSF