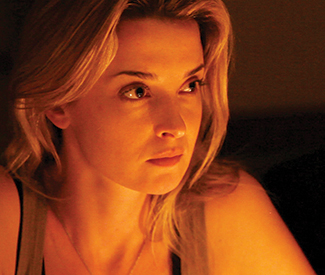 FILM Coherence begins with an important phone conversation that’s cut off by a crappy connection — just as the phone’s owner, Em (Emily Foxler), realizes its screen has spontaneously cracked. It’s the first eerie moment in a film set at a seemingly normal dinner party among four couples: insecure ballet dancer Em and boyfriend Kevin (Maury Sterling), who are teetering on the verge of either taking the next step in their relationship, or breaking up; new-agey older married couple Beth (Elizabeth Gracen) and Hugh (Hugo Armstrong); the casually dating Amir (Alex Manugian) and Laurie (Lauren Maher); and hosts Lee (Lorene Scafaria), a techie, and her actor husband, Mike (Nicholas Brendon).

About five minutes into the movie, chatter turns to the comet that’s about to pass overhead — a casual conversation topic that soon becomes an invasive presence. Phones don’t work, and the power shuts off — except for that one house a few blocks over that’s mysteriously illuminated. Tension among the group spikes as various members go to investigate and discover that the comet has some serious fucking-with-reality powers. Spooky, pleasingly mind-bending, and highly creative (the whole thing takes place almost entirely within a single room), Coherence only gets more satisfying with multiple viewings. It’s the directorial debut of James Ward Byrkit, a Hollywood veteran who wrote Oscar-winning animated film Rango (2011) and worked on multiple Pirates of the Caribbean movies. Once my brain had time to untangle a bit, we talked Coherence.

SF Bay Guardian You’re known for your work on Rango and the Pirates movies. What drew you to Coherence, which is a completely different type of film?

James Ward Byrkit I actually have a background of working on much more intimate projects — but all these years, because of my drawing abilities, I ended up working on these huge blockbuster films, which I love, and I love those directors, and I love big crews. But I was really craving getting back to the purity of working closely with actors, and concentrating on storytelling and characters. Especially after Rango — which was super-fun, but it was years of manipulating every pixel of every frame — I wanted to get back into something much more improvisational and grounded in bare-bones filmmaking.

SFBG How did you cast your actors?

JWB They were friends of mine — I knew them all, but they didn’t know each other. I cast people that felt like they would be friends, or partners. They met each other for the first time five minutes before we started shooting, and they had to jump right into it. The whole thing was an improvisational experiment.

I’ve always wanted to try something that did not rely on a script, because everything in Hollywood is all about the script, and that’s the only priority; that’s one way to do it, but it’s not the only way to do it. I wanted to get rid of the script so I could get those naturalistic performances. I wanted eight people talking, and overlapping, and having natural speech patterns. The only way you can do that, really, is to get rid of the script and allow them to be in the moment.

SFBG The dialogue may be improvised, but the story is intricately plotted. How did you approach that without a script?

JWB It took a year of just pounding out the story — the twist and turns and the puzzle of it all, figuring out the clues and the structure. I had a very clear, very solid outline that was just for me, though I made it with my co-writer, Alex Manugian, who plays Amir in the film.

When we actually shot it, before they would show up each day, I gave each actor a note card of their character’s motivations, or back story. Little bits and pieces that they could use that night. But they wouldn’t know what any other character got, so it was all a surprise to them how everybody else reacted. And none of them knew how it was going to end.

SFBG Did the actors help create their characters?

SFBG Can you talk about the unusual editing choice you made, to have scenes abruptly cutting to black?

JWB Part of it was a rhythmic theme, and part of it was a clue. For the people who watch the film multiple times, there’s definitely a pattern of cutting to black that starts to inform what’s going on, which I’m not going to give away [laughs]. Going into black is such an important theme. The lights go out, they’re plunged into blackness. There’s an even darker space when they go outside. And then, the blackness between characters. So when we tried it as an editorial thing, it was so effective that we committed to it and it ended up being something that took many, many, many weeks to perfect. And it still baffles some people, obviously, because it’s so jarring.

SFBG Coherence is a relationship drama, but it’s also a sci-fi film. What inspired you to include those elements?

JWB Well, we basically didn’t have any money [laughs]. I had a camera, some actors that I knew, and a living room — and that’s it. So how do we make a living room more interesting? It got us thinking about Twilight Zone episodes, and how those are often set in very mundane, normal places, and yet there’s this bigger feeling to them because there’s a cosmic story, or a slightly supernatural element that has permeated their reality. And that got me really excited, to think of a fractured reality, and therefore the living room became much bigger.

SFBG Sci-fi without special effects is kind of a genre on the rise.

JWB I love it. My biggest hope is that someday [Coherence] could be on a double or triple feature with Primer (2004) or Timecrimes (2007), or another super low-budget homemade movie. It’s a really exciting realm to be in. I think people went down the wrong road when they started assuming science fiction meant only big visual effects.

SFBG And wait, did you say you filmed it in your living room?

JWB Yeah! We didn’t have any money to rent another house. It was very challenging because my wife was nine months pregnant and she was planning on having a home birth. She said, “You’re gonna have a film shoot in our house weeks before I’m due? That’s the craziest thing I’ve ever heard!” I said, “I’m sorry, honey, but if I don’t do it now, we can’t really do it after the baby comes.” And she said, “All right. You have five nights.” We shot five nights, and then a week later, Emily [Foxler] came back to do some pickups around my house, walking around the neighborhood in the darkness. We ended that shoot at one o’clock in the morning; two hours later my wife went into labor. *