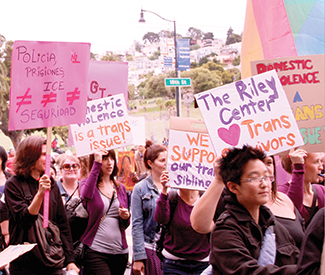 Trans March, SF’s largest transgender pride event, is happening Fri/27, starting in Dolores Park. This year’s march will kick off with a Youth and Elder Brunch starting at noon and a stage show 3-6pm before beginning the march. It will conclude at the 100 block of Turk Street, where a San Francisco street will finally be named after a trans: pioneering drag performer and trans woman Vicki Marlane. The afterparty will benefit the Transgender Gender Variant, Intersex Justice Project.

To celebrate Trans March’s success in its 11th year, we spoke with SF Trans March Co-Chair Jamie Rafaela Wolfe to find out how Trans March, trans issues, and trans rights have changed since the march began in 2004.

Although the Trans March website states that it originated from an anonymous email regarding the murder and trial of Gwen Araujo, Wolfe informed us that the march mostly started when a group of activists decided they needed to be heard. That first march was only a few hundred people. This year, they’re expecting around 7,000.

Just as the march has grown, awareness of trans issues has also grown. Wolfe told us that “11 years ago, you never heard the word ‘transgender,'” and when one did, it was often used in discriminatory ways. But now, trans people have more opportunities and discrimination has subsided. As proof of the changing views toward trans issues and people, Miss Major — the SF Pride Grand Marshal — is a well-known author and Orange is the New Black’s trans actress Laverne Cox was featured on the cover of the June 9 issue of Time magazine next to the headline: “The Transgender Tipping Point: America’s next civil rights frontier.”

Although a lot has changed for the better in the last 11 years, there’s always more that can be done. Wolfe suggests that the most important thing to work on now is workforce development. “We need people to get jobs. We need people to get education.” As a part of education, Wolfe stresses working with trans youth to get them in safe environments where they can be their “authentic selves.”