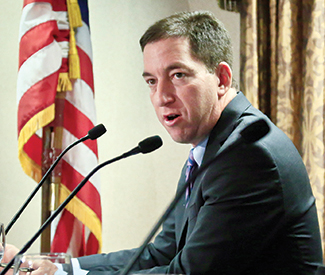 A lot has happened since June 2013, when famed Pentagon Papers whistleblower Daniel Ellsberg, then 82, donned a pink feather boa to lead an energized San Francisco Pride Parade contingent on behalf of US Army private Bradley Manning, who couldn’t attend due to being held in federal custody.

Manning, a whistleblower who stood accused of leaking classified US documents, was celebrated as a queer hero by the more than 1,000 parade participants. They hailed the young private’s courageous decision to share US military secrets with WikiLeaks in a bid to expose human rights atrocities committed during the Iraq War.

The Bradley Manning Contingent had been ignited by the drama following Manning’s nomination as a grand marshal for Pride, then crowned grand marshal in an erroneous public statement, an announcement that was then emphatically revoked by the San Francisco Pride Board of Directors.

The messy, embarrassing incident made international headlines and sent a torrent of criticism raining down upon Pride. Progressives sharply condemned the board as spineless for being afraid to stand with a celebrated queer whistleblower whose act of self-sacrifice could alter the course of history.

In late August 2013, Manning announced that she identified as female and would be known as Chelsea Manning from that day forward. The announcement was concurrent with her sentencing to 35 years in prison for leaking classified US government documents.

The whistleblower’s name and gender identity aren’t the only things to change since last year: Chelsea Manning has been named an honorary grand marshal for the 2014 Pride celebration.

“The 2013 SF Pride Board’s controversial decision to revoke her status as Grand Marshal fueled an international controversy and created intense strife within the local LGBT and progressive communities,” a statement on Pride’s website explains. “In January, in the spirit of community healing, and at the behest of SF Pride’s membership, the newly elected SF Pride Board of Directors reinstated Manning’s status as an honorary Grand Marshal for the 2014 Celebration and Parade.”

The other game-changing subplot of this continuing whistleblower saga, of course, began to unfold just weeks before the 2013 Pride celebration, when former National Security Agency contractor Edward Snowden came forward to explain that he’d leaked secret NSA documents to expose a sweeping dragnet surveillance program intercepting millions of Americans’ digital communications, because he believed it posed a threat to democracy and personal freedom.

Snowden first unmasked himself as an NSA whistleblower in a statement filmed in a hotel room in Hong Kong; he’s now in Russia, where he’s been temporarily granted asylum. Ellsberg recently joined an advisory board to the newly formed, Berlin-based Courage Foundation, which has set up a legal defense fund for Snowden. Manning continues to serve out her prison sentence, while Julian Assange, founder and publisher of WikiLeaks (which exposed Manning’s leaks to a global audience) marked his second anniversary of being confined within the walls of the Ecuadoran Embassy in London on June 19.

Meanwhile Glenn Greenwald, whom Snowden selected as the recipient of his revelatory NSA files, has just embarked on a US book tour.

“The last year has been a bit intense,” Greenwald told a sold-out audience at San Francisco’s Nourse Theater on June 18, shortly after his arrival onstage was greeted with a standing ovation. His newly released book, No Place To Hide, provides an overview of what’s transpired in the movement against government surveillance since Snowden first approached him with leaked NSA documents.

“The surveillance state is aimed not at terrorists,” Greenwald said, “but at entire citizenries, without any shred of evidence of wrongdoing. The debate that has been triggered is about more than just surveillance,” he added, spurring dialogue on several overarching issues, “including the value of privacy.”

Greenwald named two troubling outcomes to emerge from the exposure of government secrets: First, the whistleblowers had been tarnished in the press as freakish or crazy as a way to diminish the gravity of the information they’ve revealed; secondly, the government’s practice of conducting massive electronic surveillance raises questions about how far press freedom can possibly extend in the digital age.

The author and constitutional lawyer then engaged in some myth-busting against the narratives that had been put forward concerning Snowden — claims that the security analyst is “a fame-seeking narcissist” or a spy.

“When I asked him over and over again why [he did it] … He told me it was the pain of having to live the rest of his life knowing he’d done nothing about this,” Greenwald said.

He added that he found the actions of those who sought to condemn Snowden to be very telling. “It is not simply a bunch of hacks or loyalists. The people who have decided that there must be some hidden secret motive … are doing that because they really can’t believe that a person can take an action … out of political conviction,” he said. “There’s a belief by the people who are soulless and have no convictions that everyone else is playing by the same rules.”

Nor was this treatment of being raked over the coals unique to Snowden. Manning was maligned in the press as suffering from a “gender disorder,” Greenwald pointed out, rather than being accepted as a transgender person.

And in the case of Assange, Greenwald shared an illuminating anecdote: “The Iraq War logs showed extreme atrocities,” he pointed out, but The New York Times granted this story just as prominent front-page treatment as “a profile of the quirky personality attributes of Julian Assange.” This article painted the WikiLeaks founder as bizarre and freakish, Greenwald explained, containing the “shocking revelation that Julian Assange’s socks were actually dirty.”

Meanwhile, on the morning of Greenwald’s San Francisco speech, Assange made a virtual public appearance in his own right. In a conference call with the Bay Guardian and other media outlets held from within the walls of the Ecuadorian embassy in London, the WikiLeaks publisher discussed his bizarre situation and took questions from the press.

Assange has been granted asylum in Ecuador and is staying in an apartment inside the Ecuadoran Embassy in London, but if he sets foot outside the building, he will be immediately taken into custody by British security forces. More than $10 million has reportedly been spent on having officers stand guard outside the embassy, where they harass his guests as they come and go — but the British security apparatus is only one of several complicated problems facing Assange. His other adversaries include the governments of Sweden and the United States, both of which want to put him on trial.

In Sweden, prosecutors are waiting to try him on allegations of sexual misconduct — but “If he goes to Sweden, it will more than likely mean a one-way ticket to the United States,” his attorney Michael Ratner made plain in the press call.

In the US, WikiLeaks continues to be the subject of a criminal investigation by the Justice Department, which Assange described as the longest ever directed against a publisher.

“It is against the stated principles of the US, and I believe the values of its people, to have a four-year criminal investigation against a publisher,” Assange said. He added that the government’s targeting of WikiLeaks for publishing classified documents could have ramifications for any members of the press who seek to dig deeper than just reporting “the contents of a press conference,” as he put it. And with the rise of digital media, “All publishers will shortly be Internet-based publishers,” he added.

Journalists peppered Assange with questions, and evidently some couldn’t resist the temptation of infotainment. Had he been tuning into the World Cup? One wanted to know.

“I have been watching the World Cup,” Assange replied, “although the reception in this building is quite difficult.”

And who, pray tell, is he rooting for? “Ecuador undoubtedly deserves to win,” Assange said. “But I think there’s such prestige riding on the issue for Brazil that they are the most likely victors.”