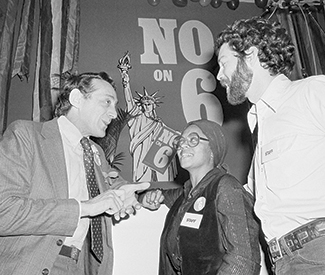 As Pride celebrations across the country unfurl their rainbow flags this month, teacher tenure in California suffered a stunning blow from a Los Angeles Superior Court, undermining protections that have shielded the LGBT community from discrimination.

Although the decision will likely be appealed, Judge Rolf M. Treu’s ruling galvanized teachers unions and evoked memories of conservative attacks on gay teachers in the 1970s, including the unsuccessful Briggs Initiative that was a rallying point for then-Sup. Harvey Milk and a new generation of LGBT political leaders.

“To jeopardize any of the protections we have now, it’s a thinly veiled attempt to demoralize teachers, and it’s an attack on public education,” Assemblymember Tom Ammiano, the San Francisco Democrat who began his political career as an openly gay teacher campaigning against the Briggs Initiative, told the Guardian.

LGBT rights and teacher tenure may seem to have little in common, but a peek at the movers and shakers in the LGBT and teachers’ rights movements show an interconnected relationship of protections and the players who fight for them. Loss of tenure can threaten the protection of minority groups, academic freedom, and unpopular political speech, despite employment rights gained in recent years.

In California, K-12 teachers are shielded by legal protections often referred to commonly as tenure. Permanent status is the backbone of these protections, offering an arbitration process for teachers who administrators intend to fire. Also struck down by the judge was the First In, First Out law, which protects veteran teachers from layoffs by letting go of recent hires first.

In his ruling, Treu said these policies created an environment where students were burdened by ineffective teachers who were difficult to fire, disproportionately detracting from minority students’ education quality in the most troubled schools.

“The evidence is compelling,” the judge wrote in his ruling, “indeed, it shocks the conscience.”

Many education advocates vehemently disagreed with that ruling, and the veracity of the evidence will be further weighed in upcoming appeals. But along the way to pursuing equality for students, the equality of teachers may find itself eroded by an unlikely new hero of the LGBT movement: A conservative attorney who fought against marriage discrimination, but also litigated against the legacy of an LGBT legend.

When the court’s decision finally hit the news, the outcry of happiness and surprise at City Hall was deafening. The expressions on the faces of those there was that of joy with many understandably streaked by tears. Attorney Theodore Olson helped litigate against Prop. 8 and won, and as he fought for gay rights, his face was often streaked with tears as well, LGBT rights activist Cleve Jones told us.

“There was a part of that trial when the plaintiffs Kris Perry and Sandy Stier described their love for each other,” Jones said. “I was sitting with their family in [US District Court Judge] Vaughn Walker’s court. When we broke, Ted Olson went to embrace them and there were tears on his face.”

But Olson is not a poster child for most politics considered the realm of liberals and Democrats. Olson and fellow Prop. 8 litigator Attorney David Boies were on opposing sides of the Bush v. Gore case that Olson won, handing George W. Bush the presidency in 2000. Olson was then appointed solicitor general of the United States, often leading conservative causes.

Olson and Boies will talk about their new book Redeeming the Dream: The Case for Marriage Equality at the LGBT center on June 25 (joined by Supervisor Scott Wiener), but Olson gave us a glimmer of those motivations.

Olson, a Los Altos native who attended UC Berkeley School of Law, told the Guardian in a phone interview that his stand on gay rights was based on conservative principles: “I think of conservatives as including people who are libertarians and respect individual liberty.”

A trailer for “The Case Against 8,” which features Ted Olson heavily.

He said the right to marry the person of one’s choosing should be an individual right that government has no business banning. That belief in individual liberty is at the core of his political principles. “It affects me in absolutely the deepest personal way,” he told us.

Whatever his ideological motivations, Olson became a hero in the LGBT community. But this year, he was one of the attorneys who convinced Judge Treu of the evils of teacher tenure. In the trial, Olson claimed one Oakland teacher was harming elementary students’ educational outcomes: “The principal couldn’t remove that teacher. These stories are so awful, sometimes you feel people are exaggerating.”

Yet the problems afflicting Oakland schools and its children, the unions argued, are not due to teacher tenure. In a city with high violence rates, students’ broken homes, low teacher pay, and difficult working conditions, critics say Olson oversimplified and misrepresented a complex problem.

“We all know there are problems in our schools,” Jones, who works with unions, told us. “But there’s never of course discussion about poverty, or students growing up in single families, or class sizes.”

These were all arguments the union made against Olson, unsuccessfully. The decision to remove protections for teachers may send ripples into other states and spur increased attacks on teacher protections.

And unlike California, which has strong anti-discrimination protections, that campaign may allow teachers of other states to be fired or dismissed for coming out of the closet, an issue that helped elevate Harvey Milk into such an iconic leader.

Jones and Ammiano fought alongside Milk against Proposition 6 in 1978, known as the Briggs Initiative, which would have made it illegal for openly gay people to teach. Then-Sen. John Briggs and his allies associated gay teachers with child molesters and frequently said they may influence children to become gay.

“I was born of heterosexual parents, taught by heterosexual teachers in a fiercely heterosexual society,” Milk said in a speech at the time. “Then why am I homosexual if I’m affected by role models? I should’ve been a heterosexual. And no offense meant, but if teachers are going to affect you as role models, there’d be a lot of nuns running around the streets today.”

This fight may be history, but Ammiano said such biases are still with us today, such as with how some see the transgender community. “We’re holding people at bay around LGB issues, but the T part now is the crossroads for the right wing [activists] who are rolling back protections,” he said.

Only 30 US states offer employment protections for sexual orientation, and some of those only cover government employees, according to a study by Center for American Progress. Only 23 states protect against firing for gender identity.

Vulnerable teachers lacking protections granted by tenure or equal employment laws are still being fired in California and across the country. In April, a transgender Texas substitute teacher was fired for making children “uncomfortable,” according to news reports. In Glendora, California, a teacher was fired from a religious private school after a photo of he and his husband kissing on their wedding day made the local newspaper.

This month, President Barack Obama announced an Executive Order mandating federal contractors enact policies protecting workers from dismissal due to sexual orientation or gender identity. Many speculate this was announced to press Congress to pass the Employment Non-Discrimination Act, which would protect private employees from discrimination based on gender or sexual orientation.

“This is only round one,” stated Senator John Briggs to the press about the defeat of Proposition 6, Nov. 7, 1978, at a Costa Mesa hotel. Proposition 6, called the Briggs Initiative, prohibits gay teachers from working in California public schools. AP file photo by Doug Pizac

But ENDA has stalled for years, despite the best efforts of advocacy groups nationwide. And as the country awaits equality, many teachers’ last hope against unlawful dismissal is tenure. In fact, tenure laws were first drafted after the Red Scare and Sen. Joseph McCarthy’s witch-hunt for communists, California Federation of Teachers spokesperson Fred Glass told us.

Yet Olson recoils at linking LGBT rights to teacher protections. “I support wholly protections for people for who they are, for heaven’s sakes,” he told us, mentioning that Milk “was very much an inspiration and very important to us.”

And Jones still thinks of Olson as a hero, saying that life and politics are complex.

“Irony abounds,” Jones said. “I don’t square it. You can’t square it. It’s there. But my respect for Ted Olson is based on his very genuine support for our community on the issue of marriage. For LGBT people to win equalit,y it’s important there’s a national consensus, it can’t just be from the left. Ted Olson was incredibly important with that effort and will be remembered generations for now. You don’t have to like everything about Ted Olson or President Obama to acknowledge they had a profound effect.”