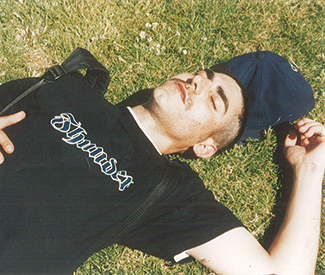 QUEER ISSUE It’s Pride month, so it’s time for me to come out of the closet. I’m one of those people. It used to be if I told certain folks that I was a queer, I’d fear getting shot. Now it’s this: 20 years ago this week, I moved to San Francisco with nothing but a backpack, a haircut, and a copy of James Merrill’s The Changing Light at Sandover — and within a few months I was comfortably situated in a grand, rent-controlled, shared three-bedroom apartment in Hayes Valley for $250 a month. It was awesome. I survived on a part-time bookstore job and spent the rest of my time either writing abstract poetry or partying my brains out. Don’t shoot!

That’s a situation so different from the one young queer people encounter today that every time I mention it I feel like I’m either lying, bragging, ancient, or crazy. I often have to refer to old pictures just to assure myself it was true.

Despite the to-die-for living arrangement, not everything was hippie-hunky-dory, of course. I was a Detroit kid with a bright punk streak who’d put himself though college by throwing raves in abandoned buildings. SF was really the last place I would have thought to move — I despised the Beats, never heard a Grateful Dead song, thought nature was flashy and embarrassing, and was mortified to hear that people here started their own raves with a prayer circle. Hoo boy.

Then there was the gay thing. Ever since I was an eighth-grade Boy George impersonator, assholes had told me to move my faggot self to San Francisco. Did actually moving here mean I was the butt of some cosmic joke? And then there was the gay gay thing. Everything about mainstream homosexual culture grossed me out, from the pink spandex-clad gym scene that seemed to be exploding everywhere to the horrid racism and misogyny — not to mention awful jock jams — of the typical Castro bars. (To be fair, the gay scene had absolutely no idea what to do with me, either.)

Oh yeah, and I moved here at the height of AIDS, when meth was taking off and even ACT-UP was admitting defeat. Good times.

But I’d found myself basically homeless back in Detroit, not to mention incredibly lonely, so when my bestie announced he’d bought us $44 train tickets to SF I jumped. Finally, more than three people to date! Maybe I would get published! Perhaps some dreamy queercore hip-hop Viking would swoop down on a Honda Hawk and carry me into the Pacific sunset! Who the hell knew what would happen, and wasn’t that the point. I’d fling myself west, into the arms of this strange, beautiful city and see what was up.

I arrived here on the blindingly sunny Solstice day after Pride, and the first thing I thought was, “Man, this joint is trashed.” The city looked like a drag queen apocalypse. False lashes, mismatched heels, wadded up denim booty shorts, and broken Zima bottles everywhere. We didn’t really have a Pride parade back in Detroit — instead, we celebrated venerable gay African American holiday Hotter Than July with a big picnic — so all this was tantalizingly new.

But I remember two Pride-related things immediately grabbed my self-obsessed attention, and made the world seem incredibly large. One was a huge picture of the Sisters of Perpetual Indulgence on the front page of the Chronicle, illustrating a recap of the festivities. I’d never seen the word “gay” written so big, not to mention fabulously charitable quasi-drag queens featured so prominently, in print, in pure celebration. (This was in weird contrast to the super-specific, fetish-heavy personal ads in the back of the Bay Area Reporter, which both excited me and scared me to death.)

The other: leftover flyers and stickers protesting then-governor Pete Wilson’s heinous Prop 187, which would deny undocumented immigrants healthcare, education, and social services. Like many young queers, AIDS and the recent Gulf War had radicalized me, but I was too young and isolated to really find my protest voice. Here was evidence of the politically expressive, multicultural gay community I was yearning to join.

Though there were some rough times ahead, I soon found a loving family twirling on the floor at the EndUp, running off zines at Kinko’s, protesting in the Mission, hustling the Polk, shelving books at Green Apple, singing along at the Fillmore, sleeping in Golden Gate Park. I said tragic goodbyes to a lot of friends, burned through a few bright loves, went to grad school, ran a bookstore, connected with my spiritual side, edited a famous gay dating site, wrote a book, got married…. Oh my god my life did become a Grateful Dead song after all.

Is this kind of life-defining SF experience available to young queers now? Those of us who lived through AIDS know, survivor guilt is very real. I feel it coming on now from being able to hold on so long in San Francisco. Everytime I hit up my Facebook or duck into a bar, I learn someone else, another vital spirit, is fleeing this hyper-expensive town for somewhere with a diversified job market that can support creative growth and personal exploration. When I see a young person arrive full of hope, even one with a job at Google, it’s hard not to react cynically — up to a third of our homeless population is LGBT, and that includes hundreds of youth. Our arts and music scene is undergoing profound transformation, and the tech world has turned away from freaks and geeks toward slick Ivy League degrees.

But then I’ll see someone post something that makes me cry with joy. “Fuck that noise about moving. I’m not giving up that easy, San Francisco. I still believe in you!” Right on, sister. We all need to fight for that dream.

Marke B. is the publisher of the Bay Guardian