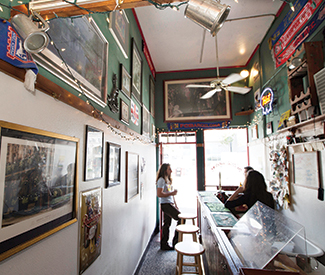 THE WEEKNIGHTER Roughly a decade ago a guy named Ken came into the restaurant I was working at in North Beach. He was new to SF so I convinced him to buy my zine Broke-Ass Stuart’s Guide to Living Cheaply in San Francisco. Thinking it was a good idea, he tried to drink at every bar in the zine in a single night. That was, in fact, a terrible idea and he ended up blacking out and getting kicked out of a few of them. But what he woke up with the next day, besides a horrific hangover, was a brilliant idea: the Broke-Ass Stuart Pub Crawl. And it was through this act of genius that Ken and I became good friends.

The idea was simple; get a big vehicle, fill it with lots of rowdy, drunk people, and cruise around SF descending on bars like a Mongol horde. Ken and his peeps worked at the corporate offices of multibillion dollar companies so they could afford one of those boozy trollies that you see around. Considering no one I knew had any money, I rented a big yellow school bus and filled it with my fellow broke folk, then the trolley and the bus caravanned around town causing mayhem.

As you can tell already, Ken is a man of vision and he said to me at one of our drunken stops, “There’s something I need to do. You know The Black Horse London Pub (1514 Union, SF. 415-928-2414)? It’s the smallest bar in San Francisco. I want to break the record for how many people have fit in there at one time. This is important shit, man.” I could tell Ken was serious, but there was no way both the bus people and the trolley people could all fit into the Black Horse. We decided it was best if the trolley people did Ken’s mission from god by themselves. Afterwards they would meet us at the next stop.

The Black Horse London Pub really is the smallest bar in San Francisco. It’s only 136 square feet, so all it has room for is seven seats, a little bit of standing room, a bar, and a bathtub full of beer. In fact, all it serves is beer. It also has “ten commandments” that include things like women having priority over the seating, kisses being the only thing allowed to be thrown in the bar, and not using your phone. It’s a good place for a party of two — and a terrible place for a party trolley.

“We did it!” Ken told me as he met us at the next bar, “We broke the record!” Honestly, I don’t know if there even was a record before that night, but there certainly was now. Ken was beaming and I was proud of him. He set out to achieve something and he accomplished it with flying colors. Fucking tenacity…or at least, fucking booznacity.

Since then we’ve done the pub crawl six times and Ken has even managed to beat his previous record. Of course nobody is ever sober enough to remember what the record is. Maybe I’ll pop into The Black Horse, ask the owner James if he knows the record, and tell him I’m thinking about planning another pub crawl soon. Hopefully he won’t make an 11th commandment forbidding them.