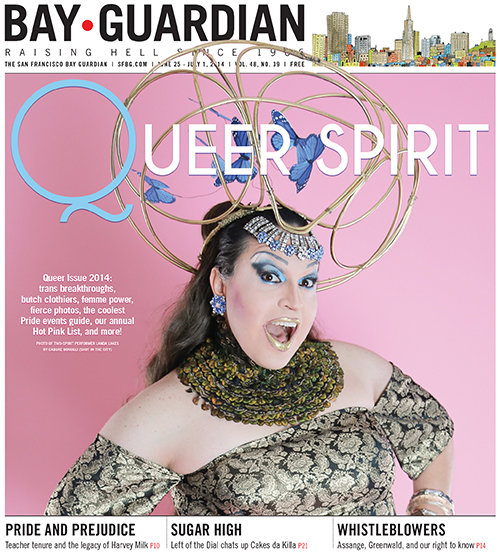 For the past few years, as part of our annual Queer Issue, we’ve rounded up a few of the people who have inspired us with their unique approaches to queer life. Whether they’re activists, artists, performers, or just plain hot-to-trot rabble-rousers, they’ve made our queer hearts beat a little faster (and reminded us of the fantastic diversity and dedication of the community). This year, we’ve gathered together another Hot Pink bunch, and asked them. “What inspires you about Pride — and what could the queer community use more of?” This year’s Hot Pink List was photographed by Cabure Bonugli (Shot in the City).

“A lot of my work involves fear; conquering it and using it as fuel,” says this musical artist whose enthralling, hyperkinetic dance performances and visual installations (often using tracks he composes) have been taking SF’s art and nightlife worlds by storm. In the past year, lithe Saturn wrapped up an extended run of his genre-defying Saturn Rising tour, opened for queer rapper Le1f, appeared at the SF MOMA Modern Ball (“I was there two years ago under completely different circumstances that I refuse to discuss in print!”) and became a unique dance fixture at several queer parties. He’ll spend this summer writing and recording his debut album, but first he’ll take the stage at the giant Hard French Hearts Los Homos IV party (Sun/29, 3pm-11pm, $20–$25. Mezzanine, 444 Jessie, SF. www.mezzaninesf.com).

“I’ve never felt closer to the community than I do now,” Saturn says. “Nationally, new narratives are shaping a wider representation and understanding of us as people that go beyond the tropes we’re used to seeing. We still need improvements on a global level, and that kind of visibility helps. I’m proud to exist in this time of transcendence, when we’re louder, prouder and more in love with ourselves than ever.”

A two-spirit person giving voice to her Native community and helping to organize the incredible annual Two-Spirit Powwow with Bay Area American Indian Two-Spirits (www.facebook.com/baaitscommunity). The president of legendary fundraising institution the SF Grand Ducal Council (www.sfducal.org) and a former Grand Duchess herself. A pageant competitor who exudes glamour and poise — and who also puts on her own fundraising California Gold Pageant. A barnstorming entertainer whose searing political indictment of Native American subjugation is complemented on stage by the creativity, history, and sheer fabulousness of her outfits. Landa certainly had us hanging on her every Instagram post and performance announcement this year. “I think I’d best describe myself as a performer employing bits of humor, politics, glamour, and tribal love,” Landa says. We’d like to add “essential spirit” to that list.

“I believe we’ve come a long way in the LGBTQ community in respect to fighting for our rights. But I think we have a challenge ahead of us. There’s been a lot of discussion on words lately, especially in relation to the ‘T’ in our acronym. Regardless of sticks and stones, I believe in Maya Angelou’s observation that words are powerful and kindness starts at home in our own community. I feel confident that we can bridge any gaps created.”

“I’m a queer, femme, feminist, activist Gemini hussy,” is how this super sex-positive spitfire describes herself. Stephany’s the executive director of St. James Infirmary, which provides health and social services to current and former sex workers and their families, and advocates for an end to sex worker violence, harassment, and criminalization. (This year, St. James led the charge to end the police practice of confiscating condoms as evidence of prostitution.) Working in the SF District 9 office with Supervisor David Campos, she helped pave the way for the first LGBT homeless shelter in SF, the creation of a buffer zone to protect patients seeking reproductive healthcare services from harassment and intimidation from anti-choice aggressors, and the securing of funding to support the needs of the transgender community. Oh, and she’s on the board of the Harvey Milk LGBT Democratic Club and hosts her own queer fiction book club.

“The big dream, for me, is to see our community living lives that are free from stigma, criminalization, and poverty. Pride plays a role in this by providing us a marker in time: to celebrate where we’re at, to find joy in our community — and also debauchery and rebellion. But it also illuminates the issues we’re neglecting.”

“I’m a queer poet; this is all I ever wanted to be,” says one of the most exciting queer poets of our time. Randall Mann’s electrifying third book of poetry, Straight Razor (released this year by Persea Books and named a Lambda Award finalist for poetry) is a cutting, touching, often hysterical, always spot-on ode to gay life in San Francisco today that was as relatable as it was lyrical. “Look at us — we’re smarter/Than our hair!” goes one couplet from poem “Teaser.” Another poem imagines gay heaven as an awkward dance party in Pacific Heights, while yet another mourns the suicides of gay teenagers by recasting their own final social media posts as poetic expressions. Randall, who has “lots of anonymous writing in shabby cafés planned this summer” is proving that poetry is as vital as ever to the queer experience.

“The queer courage of little boys in sparkly shoes and tutus, the advancement of transgender rights in the workplace — so many things inspire me. But I’m also circumspect, because sometimes under the slick performance of Pride lies the old fruitless loathing, the terror of being alone. But I’m proud.”

Exciting local techno acts, even queer ones, aren’t too hard to find in San Francisco — but Mat dos Santos and David Sternesky, aka Two Dudes in Love, have brought an unparalleled energy and intensity to the dance scene this past year. As well as DJing pretty much every party around (see them at Afterglow and Mass at the Chapel Sun/29) and producing several records — including RuPaul’s Drag Race favorite Jinkx Monsoon’s “Schizophrenic” and epic Duck Dynasty diss “Butt Fuck Dynasty” — the oft-half-naked, very-much-in-love duo launched the Friends With Benefits record label with ace DJ-producer Trevor Sigler earlier this year. FWB recently released two volumes of James Broughton: The Music of His Dance — compilations full of mighty big queer techno names that pay tribute to the revered Bay Area filmmker-poet and original fairy godfather of gay liberation, whose motto “follow your own weird” the duo tries to live out. Exhibit A: the FWB monthly “cuddlecast” stream, broadcast from their living room full of cuddling cuties.

“‘Pride’ is about transcending pride vs. shame, male vs. female, gay vs. straight. It is about facing your fears to finally embrace your authentic self, which is the key to unlocking a life of happiness and supporting others along their journey.”

Joining the legendary, Tony-award winning SF Mime Troupe (www.sfmt.org) this year after burning up its outdoor stages all last summer, Rotimi has already realized a dream. But this vital actor-writer-teacher-director hasn’t rested on any laurels. In addition to conquering an important role in CalShakes’ A Raisin in the Sun, starring in one-man play Homeless, and preparing to workshop plays with Berkeley Repertory Theatre and Shotgun Players, “I’ve graced drag stages (as Cleo Patois) and go-go boxes, and done nude performance art in the middle of the Folsom Street Fair and the occasional Iphone commercial to pay the bills.”

“We live at a time of unprecedented acceptance, legal recognition, and visibility. I’m excited and proud of the strides being made. However, I’ve been disheartened by some of the harshness in our community. We’ve seen such vitriol being spewed by those who would challenge and defend the use of certain words to refer to members of our community, and we’ve also seen people shame others for seeking to use every means they can — including a Truvada regimen — to protect themselves from HIV infection. I think as a community we need to work on communicating with compassion, love, and respect.”

When Erin Berg, a transman, and Kyle Moshrefi, a gay woman, realized they shared a mutual passion for menswear for women, transgender individuals, and allies — not to mention an impeccable eye for dapper style — Kipper Clothiers materialized into stylish being. We want all their stuff, especially the fly, custom-made button-up shirts. While not the first to specialize in fine meanswear clothing for the female-bodied, Kipper, which launched a year ago in July, is perfectly dashing and SF-centric: born from the community via Kickstarter, and moving into a storefront at 78 Gough this summer. “We were very fortunate to have been embraced fully by the community and to have provided custom suits and shirts for several weddings,” Berg told us. “There is nothing more rewarding than seeing the happy faces of our customers when they put on a suit that fits for the very first time!”

“When our clients wear our products, they are expressing pride in who they are through their personal style. Within the last year we have seen a rise in visibility of LGBTQ brands around the country. Lesbians, transmen, gay folks, and allies now have an opportunity to express themselves while supporting the community — and we are so excited to be a part of this group.”