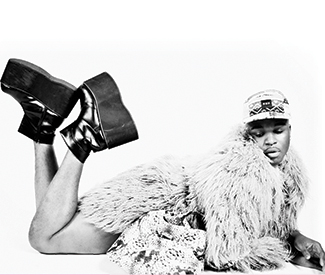 LEFT OF THE DIAL/QUEER ISSUE Take the sexual braggadocio of Lil Kim, the rapid-fire flow of Twista, and a fashion sense that combines Nicki Minaj with, depending on the day, Bjork, Ma$e, or, say, the board game Candyland, and you have a close approximation of Cakes da Killa. The Brooklyn-based, baby-faced musician is both a rising star and, unfortunately, something of an oddity, just by virtue of being a gay man and a rapper.

His participation in one of the most homophobic quadrants of pop culture as an out gay guy aside, however, Cakes — born Rashard Bradshaw — doesn’t see what’s so shocking about some of his lyrics, even when he’s rapping matter-of-factly about how he’s going to fuck your boyfriend (actual song title: “Fuck Ya Boifriend”).

After making a name for himself with two mix tapes in 2011 and 2013 (Easy Bake Oven and The Eulogy, respectively, with the latter receiving a positive mention from Pitchfork), his latest EP, Hunger Pangs, reveals a darker, harder sound. He’s still X-rated and super funny, but he also sounds like he’s ready to fight.

We caught up over the phone ahead of Cakes’ appearance at Public Works Sat/28, as part of the club’s “House of Babes” Dyke March after-party.

SF Bay Guardian You grew up in Jersey. How did you start rapping?

Cakes da Killa I always wrote when I was young, whether it was poetry or something else. But I started rapping as a joke in high school, because I saw a bunch of straight guys doing it and getting lots of attention. And me being an attention whore, it was “I can do that.” In college I started making videos of me rapping over instrumentals on YouTube, and after people saw those videos I started getting asked to record on projects.

SFBG How did the straight guys respond to it when you were younger? Did you get any backlash for being an out gay kid, trying to get into something that’s so associated with straight, heteronormative culture, or did they just notice how good you were?

CK You know, they noticed. I came out in the third grade, and I’ve always been the gay boy that was so comfortable in myself I didn’t make straight people insecure or uncomfortable. I think I’m still that way.

SFBG The mixtape before this, when you started getting noticed, was called The Eulogy. Why’s that?

CK Honestly, I thought it was going to be my last project. I just didn’t see the longevity in rapping — it’s weird to think of yourself as a rapper, because I’m so not that. Not even just because I’m gay, but also I don’t have a rapper’s ego.

SFBG I think maybe the ego comes after you make a ton of money?

CK Yeah, but then my friends would all hate me. I just want to do it until it’s not fun anymore. So far, though, it’s still fun.

SFBG You’re so young, though. You’re, what, 22? Didn’t you just graduate from college?

CK I’m 23. And in gay years. We age like dinosaurs, so I’m basically a fossil. I graduated last May, and I moved out of my mother’s house. I’m living in Bushwick now; I’m a fully realized member of society.

SFBG You have a pretty big fan base in Europe. Where have you toured? How are audiences over there different from stateside?

When I do a show overseas, I think the main difference is Europeans think, “If we’re gonna pay five euros to see you, you better be on stage for two hours.” In the States we pay way more to see someone for a few minutes, then it’s back to the bar, or a DJ or something…we have ADD here. When I tour overseas, I have to some cardio before the show.

SFBG You’re known for some pretty filthy lyrics. Does that come naturally to you?

SFBG Do you see homophobia in the rap world getting better? What is it going to take for the culture to change?

CK I think it’s going to take an openly gay person who can really sell in the black media, do a world tour. But people that run black media right now clearly don’t see it as a marketable thing. And it’s all about money. That’s the fucked up thing about the situation, it’s not about how talented the person is, it’s ‘How can we sell this situation?’ And if you’re not marketable and a bunch of people can’t make money off you, you’re just gonna be, you know, living in Bushwick.

SFBG Musically, do you see yourself heading in any particular direction with Hunger Pangs?

CK Yeah, if I compare myself to the boy who was rapping in high school in the cafeteria, I’m definitely not the same person. I make music off of touring, experiencing things. I’m having a butch moment right now. And for my next project, I think I’m making more depressing songs.

SFBG Did that come out of anything in particular?

CK Living life. Dealing with dumb boys. Instead of being all sad about it, I’m like, let’s write an album about it. At least make some money!

With Junglepussy and Lisa Delux

The House of Babes Presents the Dyke March After-Party