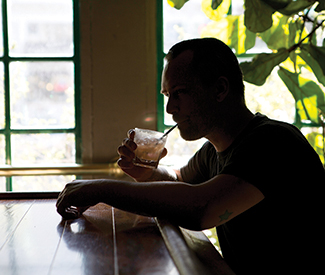 I think it was SF writer Brock Keeling who told me The Lion Pub (2062 Divisdero St, SF. 415-567-6565) used to be a gay bar. Well, I mean he didn’t tell me, I read it on his old site SFist, but you get the point. There was some reference to “remembering when the Lion Pub was a gay bar” and I thought, actually I don’t remember that at all. To me the Lion Pub had always been that place that had the cheese spread and that acted as the Normandy in the Marina’s D-Day-like onslaught of Divisidero. It was the first place over the hill where the waves of guys in collared shirts and gals in uncomfortable shoes had landed before slowly, intrepidly, marching south.

It’s hard to be nostalgic for a something you never experienced, but you can sure as hell romanticize it… not that I’m really doing either. As a straight guy I don’t imagine myself trekking all the way over to Lower Pac Heights to frequent a gay bar, especially when I live close to so many on Folsom Street. But Pete Kane’s recent article in SF Weekly about the death of gay culture in SF got me thinking about the peculiarities of The Lion Pub’s transformation. When the bar switched teams in the early 2000s it must’ve been jarring for the regular patrons. What had been a gay bar since 1971 (according to the Gay Bar History Log on The Cinch’s website) was suddenly being filled with the kind of people who still called their friends “fags” when they were busting their balls.

This was the early 2000s after all, way before Ellen or Michael Sam, and not long after Matthew Shepard. Now I’m not saying for sure that shitty things happened, because I want to believe this is/was the San Francisco we all think it is/was. But what I am saying is that the switch from a gay bar to a Marina bar must’ve been mind-boggling.

But I wouldn’t know. I wasn’t there. [Ed Note: It was weird, but OK. —Ye Olde Marke B.] The first time I visited The Lion Bar was probably in 2006 and I was incredibly impressed. It felt somewhere between a fern bar (its hidden gay legacy peeking through) and a Victorian parlor, it had a disco ball, and most importantly it had free food. I was researching the “free food” section for my book Broke-Ass Stuart’s Guide to Living Cheaply in San Francisco, and someone had tipped me off to the Lion Pub. Rumor was they put out a big cheese spread and even did free sushi on some nights.

So of course I had to go investigate. Walking in that first night I could smell the fresh fruit juice and could spy attractive people milling around. It was bigger than I expected and it wasn’t till I walked around a bit that I found what I was looking for: cheese and crackers! When I asked the barkeep how often they did this, he just kinda shrugged his shoulders and said, “Pretty much whenever they feel like it,” and let it at that.

I haven’t been back to the Lion’s Pub in years but rumor has it that the luminous cheese spread is no more, which bums me out. But maybe next time I’m in the area I’ll pop in anyways for one of its notorious greyhounds — and I’ll try to imagine what it was like back before everything got so straight. I’ll bring my own cheese spread just for old times’ sake.