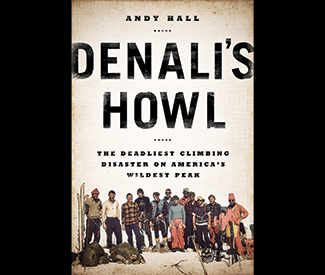 LIT Andy Hall was five years old in 1967, a kid living at the base of Denali, North America’s tallest peak. His father, a National Park Service veteran, took a job overseeing Mount McKinley National Park (as it was then called) just months before a climbing party known as the Wilcox Expedition encountered a freak storm near the summit. Seven of its 12 members died in one of the mountain’s most enduring tragedies.

Hall, who grew up to be the editor and publisher of Alaska magazine, was always haunted by the incident, which he chronicles in Denali’s Howl: The Deadliest Climbing Disaster on America’s Wildest Peak (Dutton, 252pp., $27.95). These days, he lives north of Anchorage in the small community of Chugiak. I called him up to discuss his book, a page-turner that’s as much about memory as it is about mountaineering.

SF Bay Guardian Why did you decide to write a book about the Wilcox Expedition?

Andy Hall I’d been working at a magazine for about 16 years, and I started feeling like I needed a change. I’d been close to this thing because my dad had been the park superintendent, and I’d run into a lot of people who’d been involved in it one way or another. I saw how it affected them still. I thought, “Well, I’ve got a great story sitting right here in my lap.”

At the time I started [writing the book], my dad had died five years prior. Some of the guys who’d been involved were getting up there in age. I thought, if I’m gonna do this, I gotta do it now. There were times I regretted not sitting down and having a formal interview with my dad about it, but I had talked with him enough that I knew what happened, and I knew there was a lot more material I could dig into.

SFBG Beyond the folks in your community, how did you track down your sources?

AH Some of the key players I did already know. But the ones that I really wanted to find were more difficult. For example, I wanted to find Gary Hansen, who’d managed the Alaska Rescue Group, the civilian rescue organization [that had attempted to help the climbers]. He left Alaska in the early 1970s, but I knew he was an architect, and I’d heard he’d gone to California. I’m not a detective, but I just thought: Look for someone who’s licensed in both Alaska and California. He got on the line after I called his office and said, “You found me!” Once I connected with him, he made even more recommendations, and it went on from there.

SFBG How did you extract the truth from the various stories you were being told?

AH Memory was definitely a big player. [Survivors] Joe Wilcox and Howard Snyder had both written books; I read both, and there were conflicts. If I could investigate [discrepancies] in person, I would. Then, there were original letters, documents, and journals, and I read what everybody wrote, but I would go beyond that. In the National Park archives, there were longhand accounts that had been written immediately after the incident.

In my dad’s desk, I found a reel-to-reel tape that had interviews with the would-be rescuers from the Mountaineering Club of Alaska. It was their firsthand account of finding artifacts [from the Wilcox Expedition], and then finding [the first three] bodies. So I had these early-as-possible accounts, and I would compare them to what was written later. Some people maintained a pretty solid account of what happened throughout, while others were less consistent.

In the case of Joe Wilcox, I think he wanted to make sure that people didn’t think the men on his team were incompetent. I don’t think he needed to do that, but I think he really wanted them to be portrayed in a positive light.

SFBG Building off that last thought, Denali’s Howl opens with a section listing each man’s climbing credentials. They weren’t inexperienced by any means. Did clashes within the group lead to their downfall?

AH One of the things I wanted to do with the book was contextualize the climb in the day, in the environment. In the 1960s, climbing was something you did as a group. This wasn’t a guided climb. Joe was the organizer, and he did try to lead, but he wasn’t the guide. Today, a hired guide could look at you and say, “You’re getting the early stages of altitude sickness,” and send you back down the mountain. He’s in charge, and you have no choice.

In this incident, it was a bunch of guys, essentially peers, some of whom had more experience than others, but they were climbing together. There were conflicts, but I don’t think there were any more than in successful climbs — and I don’t think they were the deciding element of the tragedy.

SFBG The book really shows how mountaineering has changed.

AH Denali National Park is now a major destination. There are more climbing rangers on the mountain at this moment, probably, than in the entire park in ’67. Back then, there were an average of about 20 people climbing the mountain in a given year. Today, a couple of thousand summit each year. It’s an industry now. There are satellite phones, [high-tech] weather reports, and a high-altitude helicopter standing by ready to respond. In 1967, these guys went up in what Joe called “the age of self-reliance” — they knew they were up there on their own. *