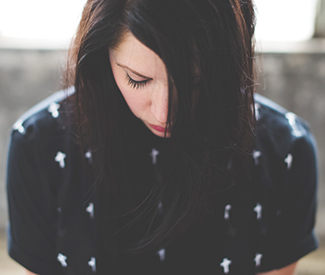 LEFT OF THE DIAL First things first: No matter what her lyrics might imply, Kristine Flaherty — the 28-year-old, Illinois-born, Stanford-educated rapper better known as k.flay — is not sniffing glue.

“Nor have I ever, actually,” she says thoughtfully, having folded herself into a chair in the corner of her West Oakland rehearsal space. “I’d just like to state that for the record. People think I’m on drugs because in some of my lyrics I’m in a really dark place…but no. And sniffing glue in particular seems like something you do when you’re 15 and can’t get drugs.”

Her desire to correct that misconception aside, Flaherty’s not exactly known for giving a shit what people think of her. It’s an admirable quality, something that radiates from the musician as part of a natural, understated air of confidence, but one has to imagine it’s been built up over the years for functional purposes: When you’re a young, white, middle-class, private school-bred female rapper whose image mainly involves jeans and sneakers, who went from making beats and rhymes in the dorm as a joke to collaborations with Zion I, Danny Brown, and Grieves, opening spots for Snoop Dogg, and a record deal with RCA, you’re going to hear some unsolicited opinions. About authenticity, about your skills. Your background, your appearance. Your drug preferences.

But it’s been 10 years since k.flay self-released Suburban Rap Queen as a college junior, and if she didn’t have thick skin then, she sure does now. That mixtape sent buzz-waves through the Bay Area hip-hop scene thanks to its energetic amateur’s sense of fun, lyrics about feminism, frat parties, haters, and the joys of eating red meat (she’s said she was listening to a lot of Dizzee Rascal at the time), coupled with a flow and production value that promised big things to come. And come they did, though perhaps not in the order she might have expected.

Life As a Dog, out June 24 (but streamable until then over here), is a debut of a whole other kind. After a decade of EPs, near-constant touring, and prolific appearances as a guest vocalist — a time in which she stole the Bay Area indie hip-hop scene’s heart before up and moving to Brooklyn three years ago — it’s the rapper’s first full-length record, and the most thematically and sonically cohesive work she’s produced. It also showcases growth, a musician fully embracing her love of melody and structure, of pop music and indie-electronic sounds. Gone is the I-don’t-give-a-fuck-what-this-sounds-like shit-talk/talk-singing, and in its place is just plain singing.

Turns out, she’s good at it. The vulnerability in her voice contrasts satisfyingly with the sharp-edged corners of her rapping, which has slowed from its previous freneticism into a more comfortable swagger that gives the whole record a personal, conversational feel. She’s still funny, goofy, approachable, gross — “Suckin’ on a bottle of Jim Beam, wishin’ it was you” goes one of the most sing-songy choruses — but there’s a grownup self-assuredness, and its flip-side, an all-too-familiar grownup’s cynicism. Regardless, her bummed-out hungover days spent walking around the city now sound like they’re actually in step with yours.

And, oh yeah: She managed to finally make this record, after a few years of trying, because in the fall of 2013, she asked if she could please be dropped from RCA.

“I got signed at a time when there was this swirl of female rappers — some electronic, some more pop, more urban, but I think everybody was interested in trying to bring female rappers a little outside of Nicki Minaj into the mainstream,” says Flaherty, who finds herself happily back on her home turf for a bit before heading out on Warped Tour (her mom and stepdad live in Oakland; her former roommates still live in their old place near Alamo Square — the Warped Tour lands here Sat/21). “And I was still figuring out my sound. I think one of my selling points is I was a little electronic, a little indie rock, a little rap, but I think that was actually not a great way to get signed. The goal with being on a major label is to get you on the radio, and I think there was a lot of internal dissent about the way to do that with me.”

She had a vision for putting out a full-length record, but over the course of three years, “it just didn’t seem like that was possible.” So she filled her time with touring — an experience that, she says, wound up informing most of the songs she was able to put out once she got dropped.

“Their heart was in the right place, but I think the structure of a major label system is so opposed to developing artists that don’t fit into a radio format that it’s kind of a battle for everyone, a lose-lose,” she says. “It felt like an ill-advised marriage. Where you’re done, but you’re still cool with, you know, running into them at Walgreens or whatever.”

She headed for LA in January of this year, anchorless as she’d ever been — she didn’t have an apartment, still doesn’t — and started from scratch, material-wise: She’d let go of upwards of 60 songs she’d written while signed to get out of her contract. But left to her own devices, she found that new songs came quickly.

“It was weird to go from lots of opinions [with the label] to literally none except my own,” she says. “I’ve never done a juice cleanse, but in some ways I feel like that’s what it would be like. ‘Oh, I’m back, and it’s just me, and here’s the bare bones of the project.’ Which was great at times, and also scary. But I’ve been mentally and musically in a much better place the past eight months that I’ve been working on this.” You can hear the solitude, the physically empty space around her in these songs, an electric post-breakup air of someone realizing how strong she is on her own.

Another result: The shift toward melody.

“For a while I was very enamored with rapping really fast, almost like when you get a toy or a video game and you want to see what weird stuff you can do,” she says. It took the encouragement of close collaborators for her to try singing more, though she’s always loved pop and melodic hip-hop (like the Kendrick Lamar she was listening to in the car on the way over here). “It’s still a lot scarier for me to sing than rap,” she says. “And I can’t say as much. I have to be pickier. But I think it’s a more comfortable zone for me, to be honest.”

She raised money to make the record through a crowdfunding site that donates 10 percent to charity, tapping into a fan base that already hangs on her every Internet-word, and reached her goal within five days (“The response was awesome … I mean, considering we’re not Reading Rainbow.”). She wrote and recorded in LA, New York, and San Francisco, mixing the record at SF’s Different Fur.

And now? She doesn’t know exactly where she’ll land geographically when the dust settles from promoting this album, but it’s pretty clear the Bay Area will always be home. At the time of this interview in Oakland, she was rehearsing with her sole bandmate and longtime partner in crime, drummer Nick Suhr (who, over the course of this interview, fetches the wifi password and coffee for both of them, and lets Flaherty know he just told a studio employee she was single). She’s chilling before tour starts, and preparing to maybe field some questions about her mental health (or deflect assumptions about drug abuse) once people hear some of her darker lyrics.

Though, “My parents like it,” she says eagerly. “Sometimes they get scared that I’m, like, extremely depressed. One time after I put up a mixtape my brother called me and was like, ‘Are you okay?'” She shrugs. “I tend to want to write when something’s troubling me, whether it’s something in my own life or I’m witnessing something that I don’t understand, that frustrates me as an observer. I never had a diary as a teenager, but I think I use songwriting like that now, and you can definitely hear that on this album.

“For better or for worse, though, I think it all makes sense together. And it sounds like me. That’s all I could really hope for.”

k.flay will come through the Bay next with the Warped Tour on Sat/21 at the Shoreline; check her Facebook for other dates.