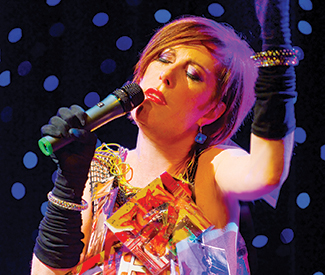 THEATER This week, at New Conservatory Theatre Center, San Francisco’s Evan Johnson remounts his popular 2013 solo play, Pansy. It’s the story of a disaffected twentysomething gay man who discovers a cache of videocassettes in the basement of his SF apartment building — made by someone who could be considered his doppelganger, a club kid long since felled by AIDS. The play functions in part as a communion between a younger generation of queer San Franciscans and the early era of the AIDS crisis.

Of course, there are those who, in their lives as well as work, continue to bridge the two eras, maintaining a vital link to this fraught but fecund period in SF’s queer/queered history. One of them is the inimitable Justin Vivian Bond. Mx. Bond has long since been based in New York, and yet v (to apply the preferred prefix and pronoun to someone who has gracefully sidestepped the dominant gender binary) grew into an artist here, and has returned to SF many times over the years, including for packed performances produced by Marc Huestis at the Castro Theatre.

Although maybe still most often identified with the cabaret sensation Kiki and Herb — a Tony-nominated, long-running duet with Kenny Mellman, in which Bond excelled as the perennially sloshed Kiki Durane — Bond’s career has hardly slowed since K&H were put to rest more than five years ago. In fact, the output for this internationally acclaimed artist, actor, performer, and singer-songwriter has been impressive: In addition to innumerable musical performances, there are two fine albums, a spunky and poignant memoir about growing up as a trans kid in suburban 1970s Maryland, and a recent turn as the Widow Begbick (singing original songs by Duncan Sheik) in a New York production of Bertolt Brecht’s A Man’s a Man.

A powerfully soulful and charismatic performer, Bond brings Love Is Crazy!, an evening of songs about love in all its aspects, to Feinstein’s at the Nikko this weekend.

SF Bay Guardian In the late 1980s and early ’90s, AIDS made SF a dark place, but it was also a time of exceptional artistic, intellectual, and political ferment. How did that affect the development of your career?

Justin Vivian Bond I majored in theater in college, but I couldn’t really see a place for myself in mainstream theater. At my freshman evaluation they told me I had to butch up; I had to be able to pass as a straight man in order to make a living in the theater. Fortunately, I’ve been able to prove them wrong! But that was sort of a frustrating and unappealing way to live my life.

So I moved to San Francisco. I was going to probably go back to college and get a degree in art history and teach. But instead, I found Theatre Rhinoceros and queer performance and Queer Nation. It was a time when there was a tremendous amount of activism around HIV and AIDS. I worked at A Different Light bookstore, so I was exposed to the greatest queer minds of the day, brilliant writers and artists that would come in there. It was also, looking back now, the golden age of queer publishing. It was when Mike Warner published Fear of a Queer Planet. It was an intellectual and creative surge for queer people. Rick Jacobsen was still alive, and he did the Kiki Gallery [1993–1995]. I worked with him on a show that was written by Christian Huygen called Waiting for Godet, which appropriated Waiting for Godot and made it about two drag queens. It was so much fun, and really exciting. And I was in Hidden: A Gender with Kate Bornstein at Theater Rhinoceros. We toured that around the country — that was my New York stage debut.

I was at the Alice B. Theatre in Seattle when the NEA Four were defunded. Three of the four were at that festival. That was when I decided that I was going to devote my life to queer performance and to having the voices of queer people heard in as many places as possible. That propelled me to stay in the role of Kiki longer than I might have liked to, because it eventually brought me to Carnegie Hall and a Tony nomination on Broadway. [After that] I thought, OK, now I can really start honoring my own creativity, aside from making political statements. Fortunately for me, once I gave up that character and started performing as myself, I feel like things have been going pretty well. And it all started for me in San Francisco, which is why I love it so much.

SFBG Was there always a political dimension to your work?

JVB Having my art spring from a political place — exposed to the queer politics, really the life-or-death politics, that were happening back then — really justified my impulse to be an artist. I’m not saying that everything I’ve ever done has been politically astute or important, but there is a political perspective behind everything I do. That helps me justify asking a bunch of people to pay attention to me. If I didn’t feel like I was actually saying something, I’d probably be embarrassed to be on the stage, really.

SFBG What are the origins of Love Is Crazy!? You took it first to Paris. Was it a show you made specifically for that city?

JVB It kind of evolved. When I was last in San Francisco, actually, I was getting ready to host a benefit for the Lambda Legal Defense [and Education] Fund. Sometimes I’ll just pick a word and put it on my iPod, then let all the songs with that word in them play. That particular day, I had recently become single, so I hit “love,” and this list of songs played. I thought, “I should just write down this list and that could be my next show.” And that’s what I did for a show here in New York called “Mx. Bond’s Summer Camp.” I liked that show but over time I sort of finessed it. Now, not all the songs have the word love in them. Some are songs from both of my records. I was going to Paris, and I decided I wanted to do this Valentine’s Day show in front of the Eiffel Tower. I had a really wonderful time with it, so I decided to tour that show this year. So that’s what it is, craaazy love. And it’s got some good anecdotes in it.

SFBG I’m curious about the origins of your distinctive singing voice.

JVB For Kiki, I sang with a character voice. I started performing Kiki when I was like 28 or 29. I was just coming into my own voice at that time, and I kind of sang in that voice for 15 years. In San Francisco, during the last run of Kiki and Herb, I met this person who I fell in love with, and went on the road with, from San Francisco up to Canada. I kind of got back in touch with my queer roots, and I started writing my own songs, because I needed to find my own voice. It really helped me to get myself into the mindset of what I wanted to say, as opposed to what I wanted to say as this character.

I wrote several songs that were on my record Dendrophile. And I started singing songs that really resonated with me, including “The Golden Age of Hustlers,” which is a song by Bambi Lake and Jonathan Basil, who lives in the Bay Area. It’s about San Francisco and Polk Street. It’s an elemental song for me. And that’s how I started to rediscover my own voice. I had also just been in London; I went to Central Saint Martins College for my MA in scenography, which is like performance installation. One of my teachers was talking about Nina Simone, and how when you hear her sing you hear the life that she’s lived. I set out to try and make my voice reflective of my experience, so that when people hear my singing voice, they’ll sort of know what my life has been like and the world that I inhabit through it. That was my goal. And it really is a very satisfying thing, I have to say.

SFBG To be concentrating on your voice?

JVB And my life, and what my voice can say.

Feinstein’s at the Nikko