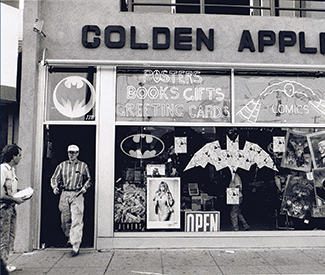 FILM Clad in his signature cape and cowl, Batman has been taking to the streets in the darkness of night and fighting crime in the imaginations of comic-book fans for 75 years.

Thanks to the Christopher Nolan film trilogy, the public has gotten used to the idea of the character being dark and brooding and living in a gritty, more realistic world. But it was Tim Burton’s eye-popping Batman, starring Michael Keaton, that first ushered in a modern vision of the Dark Knight, 25 years ago this week on June 23, 1989. That summer, Batman unleashed in a wave of pop-culture Batmania. No matter where you turned, you’d see the Bat-Signal on a T-shirt, hear “Batdance” on the radio, or catch yourself muttering one of Jack Nicholson’s iconic Joker quips.

Sam Hamm, who wrote the story for Batman and co-wrote the script with the late Warren Skaaren, is a San Francisco resident.

“I grew up reading comic books — I was completely saturated with the stuff. A few years ago, I was cleaning out some old boxes, and I came across a picture of myself when I was probably five years old, wearing a cowboy hat and reading a copy of Batman. So in that photograph somebody had encapsulated my entire future. Obviously, it was my destiny,” laughs Hamm.

By the mid-1980s, an early script for a Batman film had been kicking around at Warner Bros. for several years. Hamm had started working for the company on some different projects around that time; one day, while waiting for a meeting, he saw the script on a shelf and started reading it.

“It was very much the same structural model as Superman,” he recalls. “I was reading it, and thinking, ‘No, this is not the way.’ It [was] explaining all this stuff you don’t have to explain. It’s basically just a guy who puts on a suit and goes out and kicks ass — but why would a rich guy go out and do that every night? That, it seemed to me, was the interesting part of the story. It wasn’t how this guy came to be, it was why this guy came to be — that’s the central mystery of the movie.”

After lobbying for about six months, he was asked by Tim Burton, who was attached to direct at the point, to share his ideas for a new story.

“I said, ‘Okay, here’s the deal — you don’t start with Batman. It’s the origin of the Joker that you start out with, and Batman is the mystery. I have this feeling that Batman is really depressed, and he has to keep on going out and doing this stuff because he’s reenacting this mess with his parents.'”

Hamm’s vision was a drastic departure from the campy 1960s television show that mainstream culture most closely identified the character with at the time, but the filmmakers quickly decided that it was the direction they wanted to take.

“We started with the idea that Batman is bat-shit crazy. He goes out and does this, but then meets a girl, and starts thinking, ‘What would it be like if I had a normal life? I’ve never thought of having a normal life.’ So the progress of the story is that he starts to go sane, and what does that do to the weird sort of lifestyle decision that he’s made?”

That approach clearly resonated with fans around the world. Looking back decades later, Hamm has fond memories of being part of the phenomenon.

“It was wild. There was a huge buzz around it,” he says. “I would be driving around San Francisco, and there was a house in Noe Valley where the guy had painted the logo on his garage. They put a Bat-signal on Zeitgeist! It was quite bizarre to feel you were a part of that.” *