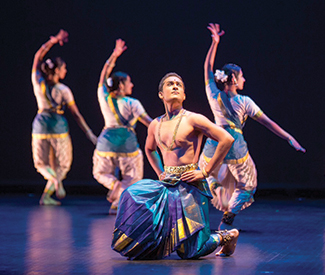 DANCE The 36th annual San Francisco Ethnic Dance Festival opened with an ambitious agenda: presenting India’s eight classical dances in one program. Yet this first weekend — EDF continues at Yerba Buena Center for the Arts through June 28 — didn’t quite meet the high expectations the festival had set for itself.

In part, this was because a shadow fell on the show. Last week, great kathakali practitioner K.P. Kunhiraman, who was to make his farewell appearance, died unexpectedly in India. With his wife, Katherine Kunhiraman, he had directed Kalanjali: Dances of India, one of the Bay Area’s oldest Indian dance schools, teaching both folk and classical Indian dance.

While bringing these classic forms together was a noble idea, EDF should have presented them on equal footing. This is particularly true because while bharatanatyam, kathak, and to a lesser extent odissi and kuchipudi are well known to Bay Area audiences, kathakali, manipuri, mohiniattam, and sattriya may have been unfamiliar even to many of the Southeast Asian families who attended the festival.

Performed by guest artists from out of town, these new-to-us genres were set to music that came out of loudspeakers. For a first exposure to an art, which so intimately depends on instruments and the human voice, recorded music was a disservice to both the practitioners and the audience.

One only had to look and listen to tabla player Samrat Kakkeri (and his colleagues) with the first-rate Chitresh Das Dance Company, which closed the program, to realize that the subtle give-and-take that flows between dancers and musicians should not be given up to expediency. No wonder the Chitresh dancers managed the intricacies of the multiple rhythmic patterns in Das’ kathak yoga with such confidence and joy. Many dance genres do just fine with unrelated music or no music at all. Indian dance, as this program proved, does not.

Also, while some of the less familiar dance forms might have been given more stage time — some others could easily have been shortened. What intrigued most in these first EDF appearances was how little use was made of the sophisticated rhythms that we have come to know as Indian dance.

More drama than dance, kathakali’s spectacular performances can last all night. The excellent Sunanda Nair gave us a glimpse of a work in which an evil demon — in the shape of a seductive woman, wouldn’t you know — gets her comeuppance from baby Krishna. She returned later in an example of mohiniattam which highlighted articulate arms and feathery hands. It was thrilling to see how her torso contrasted with her legs planted into wide plies, from which she smoothly sank into and rose from the ground.

Sohini Ray’s snippet of manipuri, however, disappointed because it looked stiff, and didn’t really develop those wonderfully gentle whipping turns that make the dancers look prayer wheels. She communicated much better in what seemed a more folkloric form of manipuri in which leaping, running, and turning on the knees conversed with a dual head drum.

Intriguing in its use of unisons and rolling wrists, sattriya — performed by two women, one in pants — conveyed the gently rocking geniality of two friends on the road. I have to assume that the one with a hat was Lord Krishna. For those familiar with the mudras, Indian dance’s gestural language, they were so beautifully clear that they were easy to follow. I recognized three for sure: a welcoming gesture, shooting an arrow, and riding a horse.

In its first appearance at the EDF, San Francisco’s Nava Dance Theatre proved itself a fresh, spunky, and musically-aware bharatanatyam company. In its piece, a love-struck young man (a dreamily handsome Arun Mathai) was comforted by a bevy of young maidens. A spectacular, theatrically savvy soloist, Bhavajan Kumar, may yet do for bharatanatyam what Joaquín Cortés did for flamenco.

In their celebratory kuchipudi — bharatanatytam’s younger, looser sister — the nine young women of San Jose’s Natyalaya school of dance handled the rigors of their geometries with considerable grace. Maybe one day we’ll see them perform to live music.

Charming, yet very serious in odissi were Maya Lochana Devalcheruvu (age 11) and Akhil Shrinivasan (10). Young as they are, they already showed odissi’s curved body position and light footwork. With good stage presence, they knew what they were aiming for. The duo then welcomed Sujata Mohapatra, an exquisite odissi dancer light but firm on her feet, floating on her toes, and her rippling neck enhancing the facial expressions.

Though in mourning, Kalanjali: Dances of India performed Tillana, the final section in a bharatanatyam performance, for which the dancers pull together everything they learned. These women probably did. *