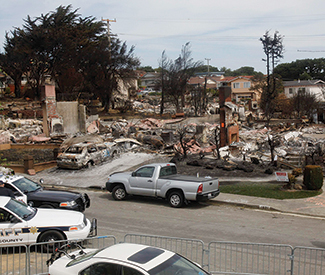 Since we at the Bay Guardian published a story flagging Pacific Gas & Electric Co.’s odd behavior of stonewalling a developer who had basic questions about a high-pressure gas pipeline running beneath his Bernal Heights building lot (see “Bernal blows up,” May 20), we’ve heard from others concerned about the company’s practices regarding safety.

PG&E has undertaken a massive pipeline improvement project to correct the underlying problems that led to a disastrous 2010 natural gas explosion in San Bruno, which destroyed a neighborhood, killed eight people, and injured 58 others.

But the repairs have been complicated by a number of factors, including inaccuracies in records that provide a foundation for the whole undertaking. Meanwhile, a fascinating document obtained by the Bay Guardian raises troubling questions about whether state regulators are taking seriously PG&E’s shortcomings in this endeavor.

Established in 1905, PG&E is California’s largest utility company. It wields tremendous political influence, particularly in San Francisco, where it’s headquartered. But the utility giant has been in hot water lately. It was indicted by federal authorities on charges of criminal negligence earlier this year in connection with the San Bruno explosion, and may soon face additional charges in a superseding indictment, the company noted in a recent regulatory filing.

PG&E’s safety upgrade project, known as the Pipeline Safety Enhancement Plan, was launched to address the underlying problems that led to the unanticipated pipeline rupture and explosion in San Bruno. That disaster brought the powerful utility under intense scrutiny, exposing a deeper pattern of negligence and sloppy record-keeping. The PSEP was rolled out as a corrective measure, in response to regulatory demands.

The detailed PSEP outlined how the utility would go about strength testing, replacing, and retrofitting its vast network of natural gas transmission pipelines, which comprise 6,750 miles traversing the utility’s Northern California service territory. The hefty document was submitted for CPUC approval in 2011.

However, things haven’t gone exactly as planned. Phase I of this plan was supposed to have been completed by the end of 2014 — but that’s now behind schedule, and some of the original targets have been revised.

The Bay Guardian attempted to contact both PG&E and the CPUC for this story, but did not receive responses. However, regulatory filings reveal quite a lot about the company’s progress.

A comparison of the work PG&E proposed to complete in 2011, versus what it reported having completed as of March 31, 2014, demonstrates how the massive safety upgrade project has shifted over time.

In a document submitted to the CPUC on May 22, PG&E reported that it had completed 541 miles of strength testing, as compared with 780 miles of strength testing originally proposed to be completed by the end of 2014. PG&E said it had replaced 105 miles of pipeline, as compared with the 186 miles of pipeline replacement it initially said would be done by the end of the year. It also reported installing 141 automated valves — but in 2011, PG&E told regulators that by the end of Phase I, “228 gas shut-off valves will be replaced, automated, and upgraded to enable PG&E to remotely or automatically shut off the flow of gas in the event of a pipe rupture.”

In hefty technical documents, PG&E provides reasons for why some of the targets have shifted, often the result of new information coming to light. In a June 6 CPUC filing, PG&E noted that nine scheduled pipeline replacement projects included in Phase I likely would not be completed by the end of the year, as originally planned.

This formal acknowledgement of a delay seems to substantiate the account of a Guardian source familiar with the pipeline safety upgrade work, who asked not to be identified. Work crews hired by PG&E contractors and subcontractors to perform the safety upgrades have found themselves in a holding pattern of waiting to be called out to job sites, our source said, despite the extensive planned work.

The utility typically sends work crews out to perform maintenance work during spring and summer months, so it can be wrapped up in time for winter, when there’s higher demand for gas heating.

The cost of these upgrades is shared between PG&E shareholders and revenues collected from utility customers.

A major obstacle to the goal of improving safety has yet to be resolved: PG&E’s pipeline records still aren’t in order, despite a major push to iron out data in the wake of San Bruno.

Since these records are the foundation for making safety upgrade decisions, these informational gaps threaten to undermine the project. The implications of this glaring problem are outlined in a CPUC document obtained by the Bay Guardian which was circulated on an internal “service list,” but not made publicly available.

First, some background: In October 2013, PG&E submitted an update to its PSEP plan to the CPUC, which included reporting on its effort to collect and analyze pipeline records. The regulatory agency’s Safety and Enforcement Division conducted an audit of this reported progress.

The audit, which made headlines when it was released in April, commended PG&E for its work but also noted, “PG&E does not have traceable, verifiable, and complete records for every pipeline component in its transmission system.” The audit also found errors in the work papers submitted by the company to back up its claims. Nevertheless, the Safety and Enforcement Division concluded, “no imminent safety concerns arose” from the findings.

But this proclamation isn’t the final word on the matter. The Office of Ratepayer Advocates is a small division within the CPUC, which functions as a watchdog looking out for the interests of utility customers. Its comments on the audit tell quite a different story, raising questions about why the enforcement division didn’t seem to place much weight on its own findings.

In its comments, reflected in the document that was circulated internally, the ORA sharply questioned the Safety and Enforcement Division’s overarching conclusion. It should “reflect the actual findings of the audit,” the ORA wrote, recommending that the Safety Division “define what is meant by … ‘no imminent safety concerns.’

“In common language,” the ORA went on, “this would be interpreted to mean there is no situation that puts the public in immediate risk of death or serious physical harm. If that is the meaning, please confirm. If not, please clarify the meaning.”

The ORA goes on to note that such a statement is “contradicted by findings within the body of the report,” and that “it is difficult to understand how the SED Report could reach this conclusion.”

The Safety Division’s audit “documents errors that ORA would define as safety risks,” the ORA notes, such as the discovery of a pipeline that has a maximum operating pressure nearly 20 percent higher than it should be, based on the pipeline feature data, or the discovery that PG&E had been “inappropriately operating a pipeline with a reduced margin of safety.”

PG&E responded to the Safety Division’s audit, and “they view their report as final,” noted ORA spokesperson Nathaniel Skinner. As far as addressing the problems uncovered in the audit, “It’s unclear to us what the next step is for the Safety and Enforcement Division.”