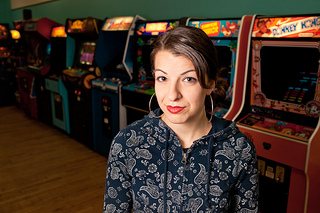 The annual Electronic Entertainment Expo is like Valhalla for male video game nerds, and though many gamer blogs are covering the newest thumb-twiddling doodads, only some are now bringing healthy dose of feminism too.

San Francisco-based media critic Anita Sarkeesian is covering E3 via the Twitter machine with scathing feminist critiques of all the newest game announcements, and a new hashtag is rising up to call out a major videogame developer for not coding women into its games.

Ubisoft’s announced it’d cut playable women’s characters from the newest Assassin’s Creed Unity. According to Kotaku, a gaming industry blog, Ubisoft claimed it was “purely a workload issue.” The team didn’t have a “female reader for the character” at its disposal, Kotaku wrote, nor did it have “all the animations in place.”

This “oh we wanted female characters but it’s just too much work/time/money” excuse is a pile of bullshit and makes me angry every time.

Sure, lots of folks will critique E3, so why is Sarkeesian special? Her opinion carries weight.

Sarkeesian’s YouTube video series Tropes Vs. Women is almost as popular in the gaming world as Mario, mainly because it plainly says what many gamers know: women are routinely kidnapped, beaten and trivialized in video games. When they are major characters, it’s often to support a man. Bechdel test for video games? HA! We’re often lucky to get one major female character of note.

But she wasn’t the only one. The hashtag #womenaretoohardtoanimate soon took off, and tons of gamers are decrying Ubisoft. Here are just a few of the tweets calling BS on Ubisoft’s excuse for not coding playable female characters into the newest Assassin’s Creed.

#womenaretoohardtoanimate bc the idea of a strong non sexualized woman is an alien concept to most gaming companies. why are we surprised?

#womenaretoohardtoanimate ? It’s too hard to come up with $60 for a new game oops…

#womenaretoohardtoanimate because they do not exist in real life. Seriously. This is serious. Women don’t exist.

And E3 is an especially big bullhorn with which to tout the new wave of gaming feminism. Every major publisher and developer in gaming plies their trade there, announcing new games (OMG HALO) and new consoles (NEW PS VITA?!) to tittilate and delight a gamer’s senses. Video game journalism is an odd place, celebrating or critiquing the newest multi-million dollar blockbuster games solely on the game’s playability or popularity.

Video games are oft-talked about as products, but the messages in the media are rarely analyzed.

In that dearth of critical media analysis, we should count our lucky stars the culture is shifting. But as Ubisoft has shown, diversity hasn’t yet arrived in the gaming world.

Until then we’ve got an internet-full of folks clamoring for change, with Sarkeesian, and her fellow Feminist Frequency producer, Jonathan McIntosh, lighting the way. Check her tweets, and her website throughout the rest of today, the last day of E3.

Upper One is the first indigenous owned game company in the US and their upcoming game Never Alone looks fascinating https://t.co/WniWp92QXU

This “oh we wanted female characters but it’s just too much work/time/money” excuse is a pile of bullshit and makes me angry every time.

“There were more severed heads than women presenters at E3 2014” by @Danielleri http://t.co/u0MhrI6mc8

Sony’s #E32014 press conference featured zero new games with lead female protagonists. An add-on DLC for Infamous: Second Son is all we get.

Here’s a still from our next #TropesvsWomen video, Women as Background Decoration, which will be ready soon! pic.twitter.com/PqiIhTVvhM

#E32014 press events were specifically designed to energize and excite gamers. But I ended up mostly feeling sad and disheartened by it all.