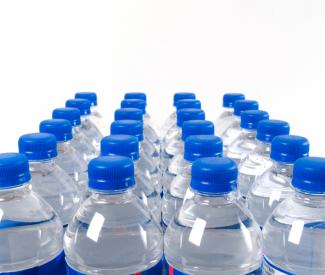 The International Water Bottle Association (IBWA) sent out a press release this week [Tues/10] “applauding” a new federal law aimed at improving public drinking water. Although some might consider this unusual, the bottled water industry sources almost half of its water from municipal supplies.

“We don’t oppose tap water,” IBWA spokesperson Chris Hogan told us. “From an industry standpoint, we, in general, want people to drink water, whether it’s bottled or tap.”

In recent years, however, both consumers and anti-disposable water bottle activists have chided the industry as wateful and unnecessary bottling and shipping what is basically tap water. “It is really just ‘public water sources’ that they take and sell back to the public,” Tomás Bosque, a member of anti-water bottle advocacy group Ban the Bottle, told us.

According to the IBWA, 49 percent of bottled water is drawn from public sources. But Hogan said that public water goes through a numerous treatments — reverse osmosis, distillation, micro-filtration, carbon filtration, ozonation, and/or ultraviolet (UV) light — before it’s bottled and sold. “FDA standards for the bottled water are so strict it’s irrelevant where it’s sourced,” Hogan said.

But Bosque is skeptical of the IBWA’s praise of the newly signed federal legislation, which is called the Water Resources Reform and Development Act.  “We would imagine that this act will help streamline the bottled water manufacturer’s ‘purifying’ process thereby providing them with more revenue opportunities,” Bosque wrote in an email.

The legislation, which was signed by President Barrack Obama on Tuesday [6/10], will increase federal funding to improve public water systems infrastructure.  “Overall, we are eager to see how this act will benefit the tap water infrastructure,” Bosque wrote. “We hope that providing some level of update to the more than 70,000 water systems will increase public awareness of this awesome, free resource and thereby help change behaviors.”

In San Francisco, however, a change in behaviors is inevitable. In March, the Board of Supervisors voted unanimously to ban the sale of non-reusable water bottles on city property. The ban will take effect in October of this year. Hogan said the IBWA is “not pleased” with the ban. “It’s a false argument to make municipal water stronger by banning bottled water,” he said. “They’re really two different things.”

Hogan explained that Sup. David Chiu, the author of the water bottle ban, should have banned other, more sugary packaged beverages — an industry Hogan cited as the bottled water industry’s main competitors — instead of water. Chiu didn’t immediately return our calls, but we’ll update this post if and when we hear back.