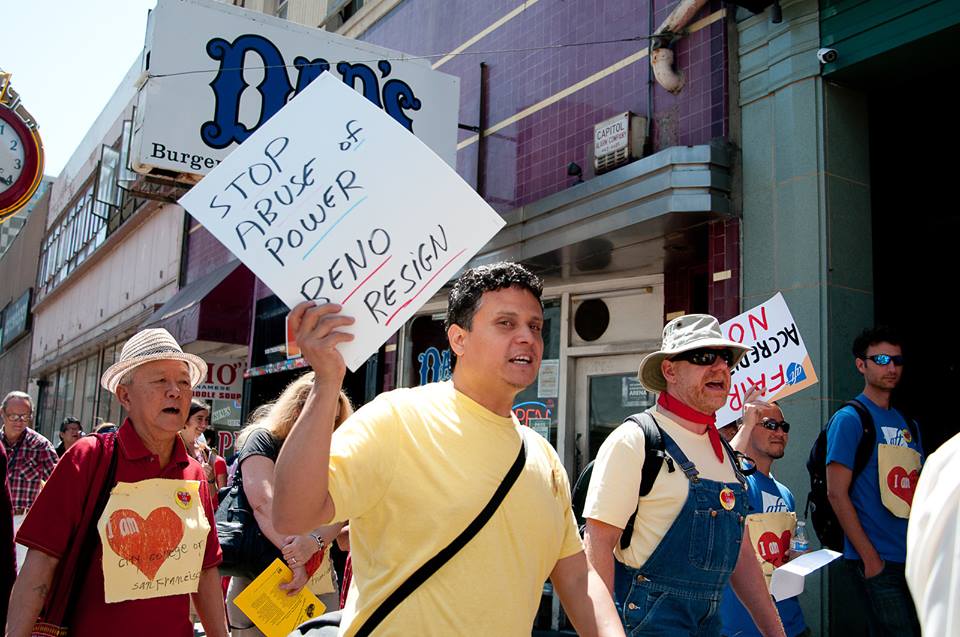 Keep City College of San Francisco open, or else.

That’s the message local and federal officials have drilled into City College’s accreditors in recent weeks. Representatives Nancy Pelosi and Jackie Speier; Assemblymembers Tom Ammiano and Phil Ting; and the state’s community college government have all publicly pressured the Accrediting Commission for Community and Junior Colleges to give City College an extension to prove its worth.

Finally bowing to pressure, the ACCJC may soon chang their own rules to save City College.

Today the ACCJC announced changes in its policy exclusively for colleges with terminated accreditation, granting a chance for such colleges to request a new “accreditation restoration status.”

“This is new for the ACCJC, but I don’t know if its new for other institutions,” Dave Hyams, a spokesperson for the ACCJC told us. But this new policy may offer new hope for City College.

The ACCJC’s policy change is not yet final, as the agency is allowing two weeks for the public to weigh in. The changes will be finalized on June 25, the commission said.

If the policy is adopted though, it means City College would be able to apply for a lifeline.

“If this policy is adopted as expected,” the ACCJC wrote in their statement to the press, “CCSF would have the opportunity to take steps to be designated as being in restoration status.”

Hyams denied the decision has anything to do with the very recent, and very public, emails from Nancy Pelosi and other politicians to demanding the ACCJC give City College more time.

“The ACCJC was looking for a way to balance the impact of termination on students,” he said, “with the needs for the college to meet basic standards.”

The college would need to file its application for restoration status by July 2014, City College’s originally announced accreditation termination date. This may all be moot, however, as City Attorney Dennis Herrera filed for an injunction to stall the college’s closure until the conclusion of the city’s lawsuit against the ACCJC. Legal proceedings are expected to begin in October.

Sara Eisenberg, the deputy city attorney leading the case against the ACCJC, told us this doesn’t affect the case at all.

“Our lawsuit is about the ACCJC’s bad acts, which go to the heart of the fairness and accuracy of the accreditation evaluation process,” she told the Guardian. “These violations of law, policy and fundamental fairness require that the ACCJC’s past decisions concerning City College be vacated and that City College be reevaluated on a clean slate using a fair process.”

Interestingly, the announcement of restoration status by the ACCJC contains a caveat: they will not extend CCSF’s appeal unless the US Department of Education gives them the go-ahead. Hyams said the ACCJC developed this plan while consulting the USDOE, so it may be a slam dunk.

Need some context on the City College fight? Check out the video above for a basic overview.

“The commission and the department had very recent meetings that have been constructive and productive, they’re fully aware of this proposal,” he told us.

One of those meetings was not so peaceful, however, as over 200 City College supporters rallied outside the ACCJC’s semi-annual meeting in Sacramento, demanding the organization rescind its decision to revoke the college’s accreditation. The protest was led by the California Federation of Teachers, the local AFT 2121 and attended by teachers and students alike.

Tim Killikelly, the president of the AFT 2121 had questions about the new policy.

He’s referring to the college’s recent drop in enrollment. At its height City College had over 100,000 students enrolled. But, due in part to its accreditation struggles and (some have said) the economy’s mild upswing, the enrollment has recently dropped to under 80,000 students.

Killikelly laid much of the blame for that enrollment drop at the feet of the ACCJC. “They should’ve sent a team to verify we’re in compliance,” he said. Instead of this middling compromise, if the ACCJC had instead granted full accreditation Killikelly thinks confidence in the college could be restored.

“Its good news,”  he said, but, “the powers that be have rallied and persuaded the ACCJC that they cannot shut City College down now. The ACCJC are not pulling their claws out of the college. We will continue this terrible dance unless the City Attorney wins his lawsuit.”

Mandelman contends the ACCJC’s move to terminate City College’s accreditation did more harm than good. “This whole process has been incredibly and unnecessarily disruptive on City College,” he said. “It’s a horrendous way to reform an institution.”

It should be noted that City College is still open, and remains accredited. For a look at the new policy from the ACCJC, click here.