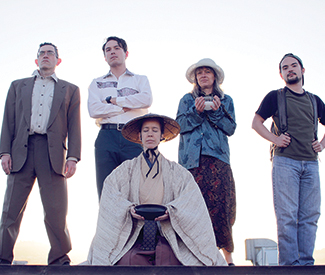 THEATER A figure wanders into the void — a pristine wooden stage, that is, pinpointed by four delicate weights hovering pendulum-like at the corners, alive to the slightest ripple of air. In the back, behind a scrim and awash in crepuscular light, a large and blooming tree floats exquisitely in space. For the wanderer, the time (if such a thing can be said to exist here) is ripe. “This must be bardo, then,” thinks the ghost. “I’m cool with that. I was beginning to think I’d live forever.”

The bardo, the in-between state between one life and another in the Buddhist cycle of reincarnation, affects different people in different ways — our wanderer is only one of 28 characters we come across — but throughout New York playwright Chiori Miyagawa’s witty, dreamy, and discerning Bay Area debut, the bardo becomes a supreme vantage on a reality burdened by desire and that transubstantial baggage known as karma.

Now enjoying a splendid world premiere (in a limited two-week run) as part of Theatre of Yugen’s 35th anniversary season, Miyagawa’s This Lingering Life freely adapts nine 14th-century Noh plays, infusing them with a decidedly present-day sensibility. Under artistic director Jubilith Moore’s expert touch, the production amounts to an exceptional blend of modern Western dramatic style and traditional Noh influences. And at its best, it strikes one as some of the more contemporary theater around.

Miyagawa’s astute grasp of the human comedy of living and dying does not always translate with equal force across the various plots — which include, for instance, a mad woman’s desperate search for her abducted son; a Romeo and Juliet–like tragedy involving two drowned lovers; the suicide of an old man who falls in love with a spoiled young princess; and the fallout between a rich father and his disinherited son, in which the impoverished younger man goes blind but ultimately grows wiser than his father. Nevertheless, the majority of the scenes (underscored by a transporting sound design from Michael Gardiner, sitting with laptop offstage right) are remarkably successful, and cumulatively powerful as characters rub shoulders in the afterlife.

Moreover, the nine-member ensemble (composed of Theatre of Yugen’s Moore, Sheila Berotti, Sheila Devitt, Alexander Lydon, Norman Munoz, and Lluis Valls; joined here by Nick Ishimaru, Hannah Lennett, and Ryan Marchand) does fine work running the gamut of earthbound emotions, from visceral anguish to driving lust and petty cruelty, while freely trading genders too in a hint of the promiscuous cycle of rebirth. Particularly fine comedic performances make the most of the playwright’s hilariously down-to-earth dialogue, while expert Noh-inflected vocal modulations and movement add a frisson to decisive moments.

San Francisco’s dedicated practitioners of classical Noh and Kyogen styles, Theatre of Yugen has long been adept at channeling Western stories in these ancient Japanese dramatic forms, setting them in a highly ritualized context that can set off their content with surprising intensity. In fact, Yugen (which takes its name from the Japanese word meaning “mysterious elegance”) led off its anniversary season last November with a Noh-inspired staging of an enduring American tragedy and Civil Rights Era–case: a beautifully composed, movingly effective meditation entitled Emmett Till, a river. The hour-long poetical-musical treatment by co-writer Judy Halebsky and lead writer and composer Kevin Simmonds not only explored the role of individual action, or inaction, in the perpetuation of systemic racism, but also opened up a space for reflection, communion, and an unsettled yet pointed act of reconciliation with the past.

This Lingering Life in a way takes the opposite tack, and thus is something of a departure for the company, since it mines the contemporary in a Westernized, interlocking set of ancient Japanese stories — supporting it all with a few choice elements of the Noh aesthetic. The hybrid creation, spread over 24 scenes, retains a Buddhist worldview, however, in which a person’s actions in one life determine the nature of the next. This lends a particular moral force to what we see, including an abiding sympathy with the dead that is both affecting and thought provoking. But, as the play suggests, karma is not always destiny. In the in-between space of the bardo, clarity and free will can penetrate the hazy sleepwalking of existence, and even fate can be renegotiated.