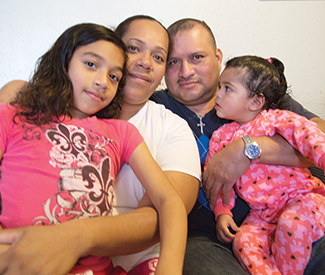 “My father is a farmer in Chiapas, and grows corn, mangoes, and bananas. Our land wasn’t enough to support our family, though. The little we were able to grow was just to eat.

“When I was 16 I left home and school, and went to Mexico City. Parents never want their children to leave. But we … can’t stay. The majority of young people in my town have left, like me, looking for a way to help their families survive.

“In Mexico City I found work as a musician, because I play the marimba. Then I met my wife. I was the one who suggested to her that we come here. I came first and found a job with this same agency. After five months, I put together enough money to bring my wife.

“We had a daughter we had to leave behind. She was just 3 when we left, and she’s 16 years old now. This was very hard for us. We send money home for her, but she doesn’t want to come live here and leave her grandmother. We don’t want to force her. And now, of course, it’s much harder to come. It’s not just more expensive, but you’re risking your life.

“When we were thinking about coming here, my idea was that we’d stay here for two or three years, save up some money, and then go back and build a house. Now we’ve been here 14 years, and we can’t go back. My children belong here, and there are a lot of benefits for them here.

“I worked at ACI for 12 years. When I started I was a sorter on the line. Then they asked me if I wanted to operate machinery. I ran the packing machine. My job was to watch the line, and calculate the weight of the material going into the machine. If I let too much go in, the machine would seize up. It would be a big headache.

“No one is irreplaceable, but it takes anyone time to learn. You can’t go to sleep on this machine. If you fall in, you’ll wind up in pieces. This is a very dangerous place to work.

“At another company, a friend of my wife reached in to free a piece of metal that had jammed the machine. The machine grabbed his foot. He didn’t lose it, but he’s disabled now.

“I didn’t know about the living wage, but some women at work talked with Agustin from the union and decided to file the suit. I never imagined they would fire us for this.

“I thought if we filed a suit, it might lead to having a union. Instead, [the agency managers] said, ‘We want you to re-verify your Social Security number, and bring us proof that you can continue to work here.’

“If we had good numbers we’d never have the kind of problems we have now. By 2001, when I came, you could not get a real Social Security number, although long ago you could.

“At first I was very angry. I felt helpless. And then quickly I began to worry. I have to pay the rent, the bills. The kids have to eat. When you’re working, you only make enough just to live.

“I haven’t been able to find another job. My wife is working, but only part time. Lately I’ve been going out to work with some friends. But it’s just two or three days a week. Every penny I make I’m putting away to pay the rent.

“I don’t believe that what happened to us at ACI is just. We’re looking for the welfare of our families, trying to get a fair wage so we can live better. People need to understand what happened to us — the abuse and low pay that immigrants have to live with.”

Editor’s note: Valladares’ name was changed to protect his identity.