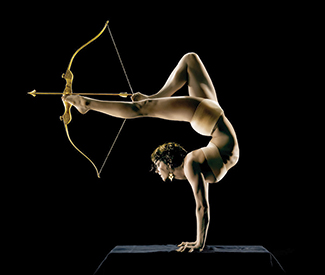 DANCE Circus Automatic’s In the Tree of Smoke is a fun and greatly entertaining show that aims to place circus acts, traditionally viewed as club and variety show entertainments, into a more mainstream theatrical context. Tree‘s organizers could not have chosen a better place than Chinatown’s recently resurrected Great Star Theater, an old-time movie house that had fallen on hard times.

In the spirit of its venue, the show was interspersed with newsreel-like video collages that proposed a perspective of the world more inclusive than the one we tend to encounter. They included vast landscapes suggesting hunters and foragers, an homage to Blade Runner (1982), and depictions of catastrophes both natural and man-made. They created a dreamy, perhaps phantasmagoric environment — one in which a contortionist feels just at home as a would-be stripper wielding claws instead of fans, or a lusciously adorned queen dragging a bunch of black balloons behind her. On opening night the connection between the narrated video clips and the live show was not yet well enough established. Yet it is hoped that by the time this ambitious but low-budget performance closes June 27, the kinks will have been ironed out.

Circus artists face a conundrum. Because what they ask of their bodies is often so extreme, it is tempting to not look beyond their sheer physical accomplishments. But Tree‘s performers tried to go deeper, via technique, discipline, and the sheer bravado of it all. Jewel-encrusted contortionist Inka Siefker ritualistically rearranged her body parts until she finally shaped them into an eerily beautiful image involving two feet and a bow and arrow. When ballet dancer Micah Walters played with verticality and gravitational pull, he seemed to transcend and affirm his own humanity. You couldn’t miss the dance elements in Katie Scarlett’s dramatic give-and-take between her and her silk apparatus; at times the silk appeared to control her as much as she did it. When Chloe Axelrod, in white, brilliantly “danced” with, in, and around her hoop, she was highly controlled, yet ever so free. But freest of all was Fleeky Flanco, a superb apparatus juggler, varied contortionist, and clown — not to mention the brains and heart behind this brave and much-welcome artistic endeavor.

In its seventh incarnation, Nol Simonse and Todd Eckert’s “Shared Space” became a celebration of dance, dancers, and two fine choreographers. Eckert is heading for the Midwest, and the future of what has become a popular showcase may be in doubt. Both choreographers have long and distinguished performance careers, which may account for the superb dancers they have been able to enlist for a long time, but they were particularly fine in this program.

Simonse’s new trio Mistakes and Gifts is an intimate yet translucent meditation on what it means to live as a gay man, with James Graham swinging the proverbial about-to-drop other shoe like a Damocles sword, and Christy Funsch as a haunted, fearful, but ultimately embracing spirit.

Eckert’s problematic Previously Published Or I Could Never Make You Stay — Revisited is a synthesis of four earlier pieces. It traces the relationship between two couples, Crystaldawn Bell with Eckert and Norma Fong with Victor Talledos. The men find each other in glorious dancing by Talledos and Eckert; they leave the women contemplating their own futures as they are holding the T-shirts the men left behind. Previously looked like both a movie romance and a soap opera, though the quartet engaged in its tasks with such passion, competence, and individuality that I almost bought into the premise.

No such reservations came with Eckert’s mesmerizing Yaw, for which Bell, Fong, and Talledos returned in a work of pure dance that explored physical forces that affect an object in motion. Light on their feet, comfortable in the air, and close to the ground, they listened to their bodies, and then followed their impulses wherever they went.

Not every episode in Simonse’s infectiously exuberant yet thoughtful What’s Important is Not Always convinced equally. The high-intensity, unison trio (Dudley Flores, Juliann Witt, and Simonse) of money-chasing business types was brilliantly comedic and scary. However, the quartet of pole-dancing males (with one ending up as a carcass) needed more complexity. Simonse also engaged a white-clad Hannah Rose in a ghoulish courting duet. But then the pace picked up with Stella Adelman and Jerry Lin exploding into a Lindy Hop-inspired duet that segued into a large-scale beach party in which couples hooked up but just as quickly dissolved. What’s closed with a stunningly beautiful solo for 17-year-old Mia Chong that explored the dancer’s relationship not with others but with her own body, carefully, curiously, and completely. *

IN THE TREE OF SMOKE