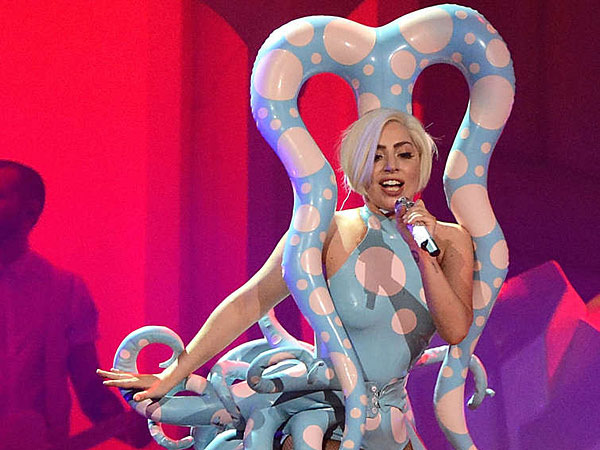 There are a lot of critiques that I can make about Lady Gaga’s Tuesday night performance in San Jose — the sports arena acoustics, the horrifically boring opening acts, the focus on her new and less popular album Artpop, $80 sweatshirts, the fact that she performed some of her most popular tunes in truncated versions and neglected to play “LoveGame” altogether — but the fact is, none of these shortcomings made a dent in the incredible energy and impassioned performance that Gaga dished out. The show was fucking incredible.

Lady Gaga doesn’t do concerts. She does productions. With a full band, an elaborate set, a dozen or so backup dancers and as many costume changes, her artRAVE tour is a feast for the eyes and ears alike. The set, bulbous, white, and otherworldly, looked straight out of Tattooine and the dancers’ eye-catching array of outfits reflected this extra-terrestrial theme. Part of artRAVE’s spectacle is simply witnessing Gaga’s amazing ability to dance in five-inch pumps and a leotard with shiny black tentacles sticking out in all directions. These theatrics, however, are in no way a crutch or a form of compensation. Lady Gaga’s talent is stunning.

From the moment that she rose out of the stage floor in angel wings and a rhinestone bodice, it was impossible to tear your eyes from Lady Gaga. Amagnetic presence, impressive dancer, and truly powerful singer, it’s easy to see why she’s made such a lasting impression on pop culture. Mixing her set with dance anthems and ballads, Gaga was able to show off her versatility as a singer; her voice is unbelievable — its clarity and power are not adequately represented by her highly-processed recorded material. Live, it soars between roaring rock growls and deep, rich vibrato, all in perfect pitch.

Though the surface of Gaga’s persona is all rhinestones and superstardom, the show was peppered with heartfelt moments and breaks from the highly organized and choreographed show. Some of her fortune cookie-wisdom lines (“Welcome to a place where we judge no one tonight. We criticize no one. We hate no one.”) are clearly rehearsed, but also clearly strike a chord with her fans, who roared appreciatively with every mic break. In the best moment of the show, Gaga pulled two fans out of the audience to sit on the piano bench with her as she sang an impassioned ballad version of “Born this Way,” as each of the girls she pulled up sang along, weeping openly.

Lady Gaga embraces and uses her status as a queer icon to spread a gospel of love and acceptance that actuallly feels incredibly urgent and genuine, and clearly impacts her fans deeply. At one point between songs, she paused to read aloud a letter that a fan had thrown on stage. In a deeply emotional note, the fan credited “Born This Way” for getting him through high school and allowing him to survive being bullied for his sexuality.

In one of her most impassioned moments, pointing out how many people had come out for her show despite warnings early in her career that she was too queer or warnings from her label that Artpop (which was indeed a flop compared with her previous albums) was too artsy, Gaga roared, “just because we’re gay or like art doesn’t mean we’re fucking invisible, ok?” with both middle fingers to the sky.

In addition to her dedication to supporting her LGBT fans, I found myself extremely inspired by Lady Gaga’s unapologetic sex-positivity and her disregard for gender roles. Her dancers wore unisex outfits that drew heavily from the gender-bending Club Kids of the early ‘90s, and Gaga herself sang openly about masturbating and even deconstructed her own typically flawless image by doing her last costume change onstage, topless and wigless, with a crew of people to help her undress and redress into a truly awesome Derelicte-Harijuku-raver oufit. Before she dirobed, Gaga joked, “Just in case we didn’t make any of you uncomfortable tonight, we’re about to.”

While the production of artRAVE is an airtight spectacle of choreography and stunning visuals, it’s the candid moments that make Lady Gaga’s stage show something special. Underneath the glitter, tentacles, and rainbow dreadlocks, there is something very real and emotionally raw.

Her messages of equality and universality are both genuine and revolutionary in an artist as mainstream and financially successful as she is. Artpop may not have been a huge success, and the Haus of Gaga certainly doesn’t hold the same untouchable status as it did in 2010, but Lady Gaga’s refusal to compromise and willingness to stay strange are truly inspirational.