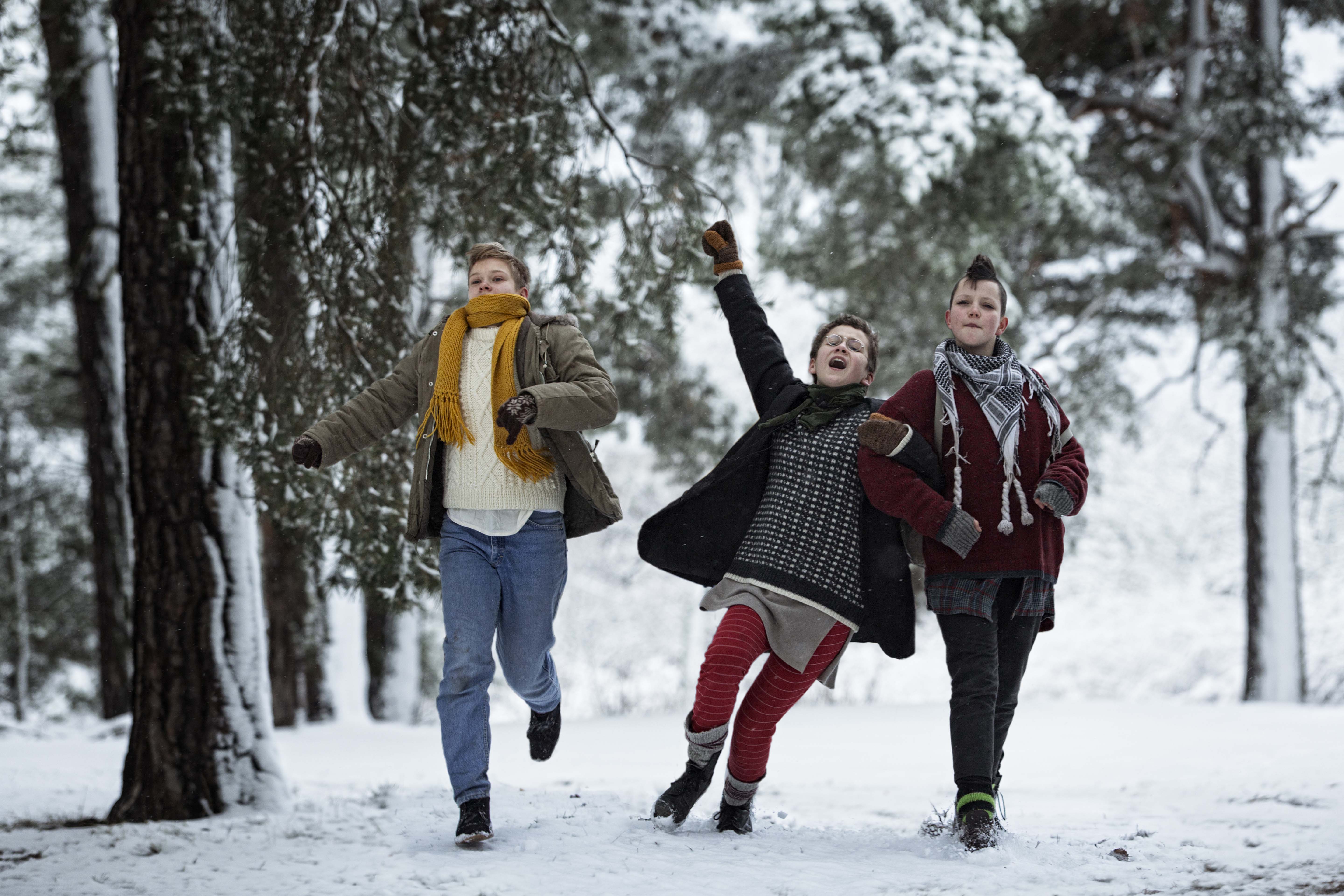 Dudes! The (lucky) 13th San Francisco Documentary Film Festival, aka DocFest to those in the know, is underway now, running through June 19 with all kinds of weird and wonderful docs. Check out Dennis Harvey’s recommendations here.

From the spangly tentacles of Hollywood, we’ve got Shailene “I Am Not the Poor Man’s Jennifer Lawrence” Woodley in a certified tearjerker, and Tom “Still a Big Enough Star to Avoid Being Cast in an Expendables Flick Just Yet” Cruise fighting aliens (and, surprisingly, his own ego). Plus: indie picks, including the latest from Kelly Reichardt and Lukas Moodysson. Read on for more.

Edge of Tomorrow Is it OK to root for Tom Cruise again? (The Oprah thing was almost a decade ago, after all.) The entertaining Edge of Tomorrow, crisply directed by Bourne series vet Doug Liman, takes what’s most irritating about Cruise’s persona (he’s so goddamn earnest) and uses it to great advantage, casting him as military PR guru Cage — repping our armed forces on talk shows amid battles with alien invaders dubbed “Mimics” — whose oiliness masks the fact that he’s terrified of actual combat. When he’s forced to fight by a no-nonsense superior (Brendan Gleeson), he’s gruesomely killed, along with nearly every other human soldier. But wait! Thanks to a particularly close encounter with outer-space pixie dust, he awakens, unharmed, to re-live the day, over and over again (yep, shades of a certain Bill Murray comedy classic). Each “reset” offers Cage a chance to work his way closer to changing the course of the war in humanity’s favor, with key help from a badass (Emily Blunt) whose heroics on the battlefield have earned her the nickname “Full Metal Bitch.” Nothing groundbreaking here — but Edge of Tomorrow manages to make its satisfying plot as important as its 3D explosions, which means it automatically rises above what passes for popcorn fun these days. (1:53) (Cheryl Eddy)

The Fault in Our Stars Shailene Woodley stars in this based-on-a-best-seller romance about two teens who meet at a cancer support group. (2:05)

Night Moves Not to be confused with Arthur Penn’s same-named 1975 Gene Hackman thriller, Kelly Reichardt’s latest film nonetheless is also a memorably quiet, unsettling tale of conspiracy and paranoia. It takes us some time to understand what makes temporary allies of jittery Josh (Jesse Eisenberg), Portland, Ore.-style alterna-chick Dena (Dakota Fanning) and genial rural recluse Harmon (Peter Sarsgaard), beyond it being a mission of considerable danger and secrecy. When things don’t go exactly as planned, however, the three react very differently to the resulting fallout, becoming possibly greater threats to one another than the police or FBI personnel pursuing them. While still spare by mainstream standard, this is easily Reichardt’s most accessible work, carrying the observational strengths of 2010’s Meek’s Cutoff, 2008’s Wendy and Lucy, and 2006’s Old Joy over to a genuinely tense story that actually goes somewhere. (1:52) (Dennis Harvey)

Rigor Mortis Spooky Chinese folklore (hopping vampires) meets J-horror (female ghouls with long black hair) in this film — directed by Juno Mak, and produced by Grudge series helmer Takashi Shimizu — inspired by Hong Kong’s long-running Mr. Vampire comedy-horror movie series. Homage takes the form of casting, with several of Vampire’s key players in attendance, rather than tone, since the supernatural goings-on in Rigor Mortis are more somber than slapstick. Washed-up film star Chin Siu-ho (playing an exaggerated version of himself) moves into a gloomy apartment building stuffed with both living and undead tenants; his own living room was the scene of a horrific crime, and anguished spirits still linger. Neighbors include a frustrated former vampire hunter; a traumatized woman and her white-haired imp of a son; a kindly seamstress who goes full-tilt ruthless in her quest to bring her deceased husband back to life; and an ailing shaman whose spell-casting causes more harm than good. Shot in tones so monochromatic the film sometimes appears black-and-white (with splashes of blood red, natch), Rigor Mortis unfortunately favors CG theatrics over genuine scares. That said, its deadpan, world-weary tone can be amusing, as when one old ghost-chaser exclaims to another, “You’re still messing around with that black magic shit?” (1:45) (Cheryl Eddy)

Test Writer-director Chris Mason Johnson sets his film at a particular moment in the early years of the AIDS epidemic — when the first HIV blood test became publicly available, in 1985 — within a milieu, the world of professional modern dance, that rarely makes an appearance in narrative films. Test’s protagonist, Frankie (Scott Marlowe), is a young understudy in a prestigious San Francisco company, and the camera follows him on daily rounds from a rodent-infested Castro apartment, where he lives with his closeted roommate, to the dance studio, where he marks the steps of the other performers and waits anxiously for an opportunity to get onstage. Larger anxieties are hovering, moving in. We get a rehearsal scene in which a female dancer recoils from her male partner’s embrace, lest his sweat contaminate her; conversations about the virus in changing rooms and at parties; a sexual encounter between Frankie and a stranger, after which he stares at the man as if he might be a mortal enemy; a later, aborted encounter in which the man sits up in bed, appalled and depressed, after Frankie hesitantly proffers a condom, remarking, “They say we should use these…” A neighbor watches Frankie examine himself for skin lesions. Rock Hudson dies. Frankie warily embarks on a friendship with a brash, handsome fellow dancer (Matthew Risch) who offers a counterpoint to his cerebral, watchful reserve. And throughout, the company rehearses and performs, in scenes that beautifully evoke the themes of the film, a quiet, thoughtful study of a person, and a community, trying to reorient and find footing amid a cataclysm. (1:29) Elmwood (director in person Sat/7, 7:15pm show), Presidio (director in person Fri/6, 8:30pm; Sat/7, 3:50pm; and Sun/8, 6:15pm shows). (Lynn Rapoport)

We Are the Best! Fifteen years after Show Me Love, Lukas Moodysson’s sweet tale of two girls in love in small-town Sweden, the writer-director returns to the subject of adorably poignant teen angst. Set in Stockholm in 1982, and adapted from a graphic novel by Moodysson’s wife, Coco Moodysson, We Are the Best! focuses on an even younger cohort: a trio of 13-year-old girls who form a punk band in the interest of fighting the power and irritating the crap out of their enemies. Best friends Bobo (Mira Barkhammar) and Klara (Mira Grosin) spend their time enduring the agonies of parental embarrassment and battling with schoolmates over personal aesthetics (blond and perky versus chopped and spiked), nukes, and whether punk’s dead or not. Wreaking vengeance on a group of churlish older boys by snaking their time slot in the local rec center’s practice space, they find themselves equipped with a wealth of fan enthusiasm, but no instruments of their own and scant functional knowledge of the ones available at the rec center. Undaunted, they recruit a reserved Christian classmate named Hedvig (Liv LeMoyne), whose objectionable belief system — which they vow to subvert for her own good — is offset by her prodigious musical talents. Anyone who was tormented by the indignities of high school PE class will appreciate the subject matter of the group’s first number (“Hate the Sport”). And while the film has a slightness to it and an unfinished quality, Moodysson’s heartfelt interest in the three girls’ triumphs and trials as both a band and a posse of friends suffuses the story with warmth and humor. (1:42) (Lynn Rapoport)