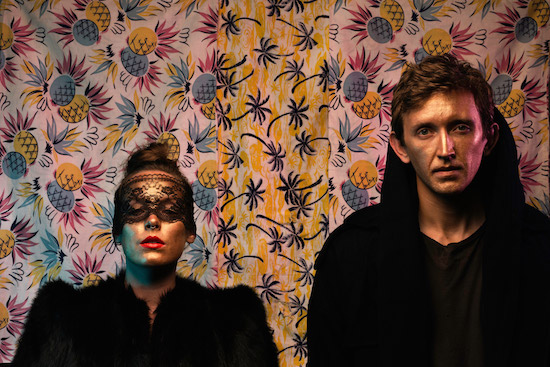 Upon first listen, Sylvan Esso kind of takes hold of you. Nick Sanborn’s melodic, layered, driving electronic beats pair perfectly with Amelia Meath’s blissful voice and artful lyrics. The way Sylvan Esso — the band’s self-titled debut album, which dropped May 13 — is wrapped together feels so intuitive, so ethereal, that it will likely bring you to your feet for an impromptu dance session.

“Hey Mami” will loop in your head; “Dress” will become your jam. And you’ll be in good company this Fri/6 at the Fillmore, when Sylvan Esso open for Oakland’s own tUnE-yArDs.

I had the pleasure of speaking with Meath from the Free Press Summer Festival in Houston on Sunday. She posted up in her trailer for our call after seeing Lauryn Hill’s performance – which, she assured me, was awesome.

So how did Sylvan Esso come to be? Well, for starters, lyricist Amelia Meath and electronic producer Nick Sanborn fortuitously found themselves playing on the same bill at the Cactus Club in Milwaukee one night. They became instant friends. When Meath needed a remix for “Play It Right” — a song she wrote and played with her indie folk trio, Mountain Man — she asked Sanborn to make it and was very pleased with the product.

After collaborating on “Play It Right,” Meath and Sanborn both felt like they should collaborate some more. And then, after some tweeting and planning, Sylvan Esso was born. “It almost feels like magic how good we are at working together,” Meath says.

When I first listened to Sylvan Esso, I felt hard-pressed to assign it a genre. Meath’s lyrics are deep and introspective, and Sanborn’s arrangements are incredibly inventive; but I think the undeniable catchiness of their songs makes Sylvan Esso, essentially, pop. Meath likes to call it “pedestrian pop”: pop music that illustrates universal human experiences and makes you “shake your butt” — and feel emotion — simultaneously.

The duo has many varied sound influences, such as They Might Be Giants, Aliyah, John Lurie/Marvin Pontiac, and Stina Nordenstam. Meath also looked to pop goddesses like Beyoncé and Rihanna while writing the lyrics to Sylvan Esso. “When you write a pop song, you’re trying to make something that’s going to sink into the brain of someone and stay with them after hearing it once,” Meath says.

The duo will be opening for tUnE-yArDs at the Fillmore on Friday, June 6. (They’re in the Bay Area for one night only.) Meath is no stranger to San Francisco, as she used to spend summers here during her teens while training with a Chinese contortionist. (Yes, Meath also happens to be a badass.)

“We have to be in Pasadena the next morning,” Meath says, “but if I were going to be in San Francisco for the weekend, I would walk up Russian Hill, and eat some really delicious food — that’s for sure! Oh, I also always really like to go to Tartine, and then I go to Bi-Rite and spend way too much money on groceries, and then sit in Dolores Park all day long!” She’s an honorary San Franciscan for sure.

When asked what she enjoys most about performing, Meath stressed the communal aspect of live music. “My favorite thing about performing is that you get to be the hinge for the whole room to become a small community,” Meath says.