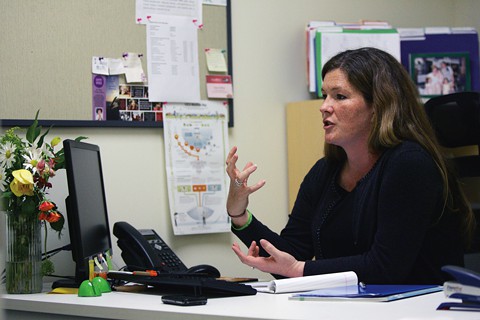 OPINION Sasha’s only 9 years old, but she has already experienced significant trauma and adversity. Whenever her father drank too much, he would hit and verbally abuse Sasha and her mother. After her father went to jail, Sasha’s mother lost her job, the family became homeless and eventually moved into subsidized housing. Sasha had also witnessed high levels of community violence. Exposure to trauma has taken its toll on Sasha; she has a hard time focusing on assignments in class and struggles with reading and math. She gets frustrated and acts out at home and in class. Her teacher thinks Sasha has learning problems, and has recommended her for special education.

We have often looked at childhood trauma such as Sasha’s as a social problem or a mental health problem — but emerging data provides a more complete picture. At the Center for Youth Wellness, in Bayview Hunters Point, we are part of a growing national movement that is looking at childhood exposure to chronic adversity through a different lens: as a public health threat.

Children, like Sasha, are screened for exposure to chronic adversity and toxic stress during their pediatric visits, through a partnership between the Bayview Child Health Center and the Center for Youth Wellness.

In the Bayview and across California, chronic adversity and toxic stress stand in the way of the health and success of many children. Now more than ever, we are beginning to understand the impact of early adversity — known as Adverse Childhood Experiences (ACEs) — on the developing brains and bodies of children like Sasha.

ACEs are traumatic experiences over which a child has no control. Examples include abuse, neglect, household dysfunction, exposure to community violence, homelessness, discrimination, involvement in foster care, and others.

A study conducted by Dr. Burke Harris, founder of the Center for Youth Wellness, found that a majority of the 700 participants, all patients from Bayview with a median age of 8 — 67 percent —were exposed to one or more ACEs.

ACEs can result in toxic stress, which can affect the fundamental biological functioning of the body and, in many children, the healthy development of their brain architecture. Without support and protection from adults, children who experience toxic stress are at higher risk for health problems, like asthma, diabetes, and obesity. Toxic stress also may make it difficult to sit still in school or to control emotions in challenging situations. If left untreated, toxic stress can lead to increased risk of adult diseases including heart disease and cancer as well as behavior problems such as depression, substance use, and suicide.

That’s why exposure to Adverse Childhood Experiences has been called the greatest unaddressed public health threat of our time. This is a public health crisis with clear implications beyond health — from education to public safety to our economy.

Our approach: screen every child for toxic stress and pilot and evaluate interventions that heal the impact of ACEs. Our goal is to share best practices in ACEs treatment with others around the country. We believe that the pediatric home offers an important entry point into addressing ACEs and toxic stress with families.

Even before a child goes to school or interacts with other systems, he or she usually visits a pediatrician for a routine well-child check. With the ability to touch countless numbers of children exposed to ACEs, pediatricians can be on the frontlines of preventing, screening, and healing toxic stress. Other healthcare professionals who work with children, such as school nurses, also are in a unique position to screen for toxic stress and help families access the services they need.

The science is clear — we must do more to prevent, screen, and heal the impacts of ACEs and toxic stress. A crucial first step in addressing this crisis is raising awareness among parents, pediatricians, educators, and policymakers that ACEs are a public health threat that we cannot afford to ignore. We must do more to identify toxic stress in our kids before it leads to a lifetime of challenges for children, families and our communities.

Suzy Loftus is chief operating officer of the Center for Youth Wellness and a member of the San Francisco Police Commission.