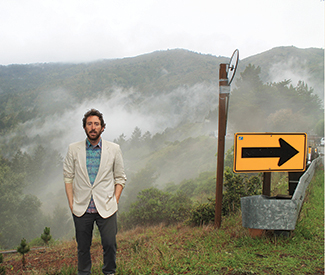 LEFT OF THE DIAL The words “folk music” conjured only cheesy things for me when I was a young teenager. I liked the standard Bob Dylan songs, Arlo Guthrie‘s “Alice’s Restaurant” at Thanksgiving. But to really give in to wind-blown, ocean- and redwood-shaped singer-songwriter stuff just felt like an impossibility to me: That was the music of my parents’ youth, after all. Joni Mitchell was (is) a great songwriter who made quintessential songs about the West Coast, but I just couldn’t quite get over that mental block of an association. Bring on the three-chord punk or bass-thumping hip-hop; anything but the f-word.

About a decade later, of course, I decided that my parents actually had very good taste (a timeless cycle in and of itself) and that I was being an idiot; folk is of course a very simple word for a very wide, complex umbrella of music. But I was thinking on all this recently when I realized that some of the most interesting music coming out of Northern California right now is music that’s for and about California itself — full of words penned by singer-songwriters who’ve been shaped by the coastline, by hikes up Mt. Tam, by the exhilaration of paddling out into the freezing, cleansing Pacific in a salty wetsuit at Ocean Beach. Call it folk, call it surf-pop: Some 46 years after Joni first sang “Song to a Seagull,” at least 20 years after a lot of us rolled our eyes at the stuff our parents wanted to listen to in the car on a family vacation, the nature kids are taking over — and it’s anything but boring.

“The plan is to go down the coast, strap our surfboards to the roof, and do a show one day, surf the next day, the whole way down,” says singer-guitarist Alexi Glickman enthusiastically, of his upcoming tour with Sandy’s. “We only want to go places with waves.”

Glickman has been writing and performing reverb- and sun-drenched love songs for the California coast — both literally lyrics about it and music that just begs to be played while driving down it — for more than a decade now. At the helm of the Botticellis, SF’s reigning surf-pop darlings from 2004 through 2008, he was responsible for the tightly-crafted, intricately composed nature of the band’s dream-moody pop songs.

That band is no longer, but if the Botticellis had to meet their end to get Glickman to sound like he does now, fronting Sandy’s, fans shouldn’t mourn too hard. Possessed of an immersive, wide open space of sound, the band’s debut album, Fourth Dementia, out June 3 on Um Yeah Arts, is just as thoughtfully arranged, but there’s room to breathe around it, maybe a druggier-end-of-the-Beatles-spectrum vibe, a sweet melancholy and nostalgia around shaping the edges of the surf-happy guitar.

“When the band broke up in 2009, I had some songs I’d been working on that just got shelved,” says Glickman, while on a break from his day job — he teaches music lessons at the Proof Lab Surf Shop up in Marin, and he’s happy to report that he just taught two nine-year-olds how to play “Smells Like Teen Spirit” on guitar. Following the Botticellis’ demise, faced with the prospect of rebuilding a musical career from scratch, Glickman went out on the road with fellow surfer-musician Kyle Field, aka Little Wings.

“His approach is very different from mine; he writes these poems, basically, and the music is an accompaniment to that. It’s very lyric-centric, and playing in his group each night was this very spontaneous thing,” he says. “The songs were not super-arranged, not ‘Ok, you hit the crash cymbal three times, then the guitar goes like this and we do a jump-kick,’ none of the preciseness I was used to. So every show was different. A lot of the shows were amazing, a few were total shitshows. But that was a way to do things that had never really crossed my mind, and it had a big influence on me.”

He took the songs he’d shelved and rearranged them, playing them with open tuning, all in D major. “Especially when we play live, I think you can see an openness to the sound that’s new for me,” he says. Certainly it’s reassuring, in part, to have familiar folks at his side for that: The Sandy’s album features includes former Botticellis co-writer Blythe Foster, Zack Ehrlich (of Sonny & the Sunsets and Vetiver), Burton Li (Citay), Ryan Browne (Sonny & the Sunsets and Tortured Genie), Apollo Sunshine‘s Jeremy Black, and Range of Light Wilderness‘ Nick Aive.

As for the pervasive sense of melancholy, Glickman acknowledges that Chris Bell’s I Am the Cosmos — the epically composed folk-power-pop opus by the tortured and underappreciated Big Star songwriter — was on repeat during the year or so after the Botticellis broke up (a time in which Glickman also had a relationship end), during which Glickman was writing these songs.

And yet: “We have a lot of fun at our shows, and I get the sense that the audience comes to shows to smile and have fun, and that’s kinda new for me too,” he says with a laugh. “When I was in my 20s, I had a lot to say and I wanted to make this beautiful music and share this experience with people, but I don’t think anywhere in that experience was the word fun. Now there’s a lighthearted element there.”

Catch Sandy’s at Hickey Fest June 20-22 or at their record release party July 11 at The Mill, which Glickman promises will feature a keg and tacos. Works for me.

“I think we’re both just naturally more inspired when we can be in nature,” says Emily Ritz, one-half of the psych-folk duo Yesway, who released their self-titled debut June 3. She and bandmate Kacey Johansing, who’ve been moving in musical circles around one another since meeting at the Hotel Utah’s open mic in 2006 (Ritz is in the noir-pop band DRMS, Johansing’s provided vocals for the likes of Geographer, and more recently has enjoyed local success as a solo singer-songwriter) have called from the road — they’re on a mini-tour of the East Coast, with our conversation providing the soundtrack for their drive from Brooklyn to upstate New York.

Though they forged their friendship and musical collaborations in San Francisco, both musicians have since moved to small beach towns in the North Bay, whose lush wilderness and dreamy pace of life unmistakably color songs like “Woahcean” and “Howlin’ Face.” The pair’s voices layer over and call-and-response to one another in unexpected ways over fingerpicked acoustic guitar that flits like light on water; throughout the album, there’s the soothing hush of being surrounded by tall trees as opposed to skyscraper, while electronic elements, vibraphones, odd time signatures, and the odd R&B/hip-hop percussive move keep you wide-awake. This isn’t easy-listening music.

It helps, of course, that they’re strong singers; there’s an easy harmony that feels like they’re letting you in on something. “We do have a really unique musical connection, and I think that comes across to people right away,” says Ritz. “We both have voices that are really different from each other, but they melt together in a way. I think it’s rare to see two front women, two kind of powerhouse vocalists come together, meet each other as equals musically, and create something totally different together.” They’ll headline the Rickshaw Stop June 25, so you can go suss out exactly what that is for yourself.

ALSO: This coming weekend is overwhelmingly packed with good shows, so time to make some decisions. Marcus Cohen & the Congress, who bring their funk-soul-hip-hop-R&B stew to the Great American Music Hall Fri/6, are one option that will not likely disappoint. Last time I saw them live I’m pretty sure no one left without a dancing-tired grin on their face. Check the Noise blog for a conversation with Cohen this week.