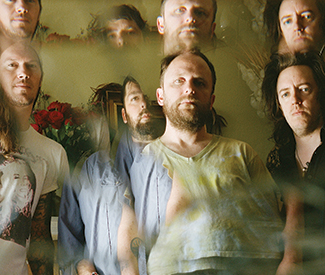 The early May Sunday afternoon when I meet up with Fresh and Onlys frontman and songwriter Tim Cohen, he’s has just reached a milestone in his career: His firstborn child has just seen his band play for the first time in her life. The day before, Cohen and co. played the Hipnic IV festival in Big Sur to a seated audience. The mainstays of San Francisco’s garage rock scene were able to catch the attention of the one-year-old for a bit before her interest evaporated into the air like pot fumes at a music festival. It’ll likely be years before the child knows she had a profound influence on her dad’s band’s newest album, House of Spirits, due out June 10 on the Mexican Summer label.

Our rendez-vous is set at Cafe Abir on ever-buzzing Divisadero Street, which of course is being consumed with another hot new opening. This time, it’s 4505 Meats, which is making a splash of a debut with its inviting smells wafting over from salacious BBQ concoctions. The unofficial fogline of San Francisco feels foreign to Cohen, who’s been a resident of the adjacent Alamo Square neighborhood for almost 13 years. That’s because he’s just spent 15 months in rural Arizona. When we reach the inevitable topic of San Francisco’s recent changes, Cohen remarks, “I was gone for 15 months and almost everything changed in that time. I can see six places that weren’t here when I left. It’s a culture shock.”

For those 15 months, Cohen decamped with his wife, newborn baby, guitar, Korg keyboard, and drum machine to a horse ranch 10 miles outside of Sedona, Arizona. Later on during his stay, he picked up an eight-track recorder from a kid on Craigslist to record his demos on. “It’s simple and gives me a lower-quality song; it’s my favorite device to record on.” says Cohen.

The storyline behind House of Spirits lends a feeling of concept album, thanks to the songwriting’s foreign backdrop. It’s still very much connected to the feel, themes, and sounds of earlier Fresh and Onlys productions, but the intrigue lies in how noticeable an effect the desert environs had on the record.

Cohen ventured to the desert of Northern Arizona expecting a new jolt of creative energy and a deviation in his songwriting, but underestimated the effect absolute desolation — amplified by its contrast to San Francisco’s bustle — would have on himself and the album. “I went there knowing I would have a lot of time to myself, [but] I didn’t know how much or how dire that solitude would become, which definitely fed into my creative process…If you’ve ever spent any time in the desert or anywhere that’s just your environment, there’s no people walking by, trains, cars, planes, it’s just where you’re at and you. I had no way to contest the silence and openness of it all. I just sat there and took it in. Finally after living there for a months, I figured how to manage my space in the environment, and just dug out my space,” says Cohen.

Part of the reason for Cohen’s retreat was the idea of not raising a baby in a big loud city. He does concede that, in addition to learning how to negotiate the vacuum of the Arizonan desert, the album was significantly influenced by his other major learning experience, that of understanding how to be both “a parent with someone and to someone.”

Like a friend coming back from a sweet vacation, Cohen highly recommends the rural experience for fellow artists. “It made me more of a prolific artist, because I came back with tons and tons of material. I worked. I say if you can afford it, give yourself that emptiness and blank agenda.”

But Cohen’s foray into the desert wasn’t all artistic introspection and exploration. The lack of constant and face-to-face communication with his bandmates exacerbated tensions already simmering in the band. That inevitable and familiar dilemma of young parents trading time with their lifelong friends for time with their nascent families provided another strain.

“People were being pulled in a lot of different directions. It began with me moving away. When your buddy has a kid and moves away, a lot of times you can feel a sense of abandonment. In a lot of ways we think of this band as our own baby,” he says. “It was almost like running off and having a baby with someone else.” Not to mention, other bandmates were dealing with evictions and layoffs.

Did the stress ever seriously threaten the album? “Absolutely, at almost every turn,” says Cohen. “We had a limited amount of recording days when I came back to SF, which created a sense of urgency and contributed to inflammation of the issues afflicting the band. These were my songs and demos. [Normally] I send the demos to guys way in advance, they think ‘How can I hear this and contribute to it?’ and that’s how it pretty much works. This time around it was a little less of that.”

For all his recounting of the hurdles and “external and internal issues,” Cohen presents a stoic demeanor, and seems confident that the band has escaped its stormy period.

“In the end we won the big victory,” he says. “This album is definitely a grower.”