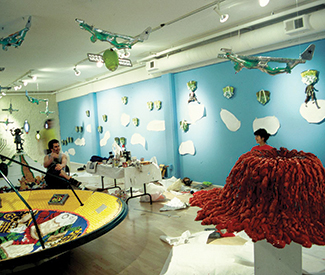 On May 23, the city’s oldest alternative nonprofit art space announced that it would suspend programming due to a fragile financial situation. Indefinitely.

Intersection for the Arts began in the 1960s as a multidisciplinary organization, a coffeehouse ministry seeking to bridge artistic and spiritual ideas, a breeding ground for art and politics. It hosted all the stars of the Beat movement: Lawrence Ferlinghetti, Allen Ginsberg, Michael McClure, Diane di Prima; and it’s maintained that same social and political responsibility in its current role, serving as a space where conscientious objectors, radicals, misfits, artists, spectators, and the rest of the community could engage their curiosity.

It was never about the money.

“No one expects to make money from this; that’s not why we do it,” said Kevin B. Chen, Intersection’s visual arts director for the past 15 years, whose job ended June 1, along with those of his fellow longtime program directors Sean San José and Rebeka Rodriguez. “We do this for the same reason we always have,” Chen said. “You come to Intersection for spirit. For heart. For ideas.”

The sudden decision was a shock to everyone. In addition to the program directors’ positions, the communications team would be cut. None of the staff knew of the drastic cuts in advance, nor were they aware of how financially challenged the institution was when they were given their two weeks’ notice.

Its financial troubles might appear to be an inescapable fact of present-day arts life in San Francisco: a cultural institution facing the economic and environmental realities of the development boom, another community disrupted by the aggressive pursuits of a new “frontier.”

However, rather than an eviction notice or rent increase, as was the case for Meridian Gallery, Root Division, and most recently Marcus Bookstore, this news came from the institution’s own board of directors, which said it had to act in the face of a financial instability.

“Intersection’s problem is not that it has no funds,” explained Vice Chair Lawrence Thoo (de facto board leader Yancy Widmer was traveling internationally and unavailable for comment). “It has quite a large amount of funds, but all of those are dedicated to specific projects. We’re cash rich but liquidity poor.” That’s meant a shortage of cash for day-to-day operations, he added. “For several years, Intersection has borrowed to help meet its costs, but it has become harder and harder to repay the borrowing in a timely manner.”

Through a press statement, the Board declared that it had “embarked on a deep organizational examination that led to a substantial rethinking of our role in the community.”

But how does the board define the community it’s serving? Depends whom you ask.

Thoo views the community as being specific to the place, which includes the Sixth Street Corridor, SoMa, and Mid-Market areas extending to Yerba Buena Center for the Arts — though Intersection hasn’t always occupied its space in the Chronicle building, most recently relocating from Valencia Street. Historically the organization operated out of North Beach; it originally opened up shop in the Tenderloin. The organization has always been deeply entrenched in its neighborhood, and Thoo says, “Our ability to bring in the best artists to work with the community in a highly participatory capacity is terrifically important, given what’s going on presently in the community.”

Yet Rodriguez, the education and community engagement program director, describes Intersection as being about people and relationships. “We get to use art and creative processes as a way to think through difficult conversations,” she said. “Intersection has always been a place for communities to gather, share stories and look for solutions.”

Its most recent collaboration was the Artists in Residence program, at Bessie Carmichael Elementary School.

“Healthy communities need this,” said Rodriguez. “We all need this.”

Thoo said it’s still too early to know what Intersection’s future holds, but that it would be exploring an arts-centered entrepreneurial approach. “Really what Intersection is going to focus on at this time is helping to build stronger communities that are more engaged and are economically and culturally vibrant,” he said. The rental space model is one way to help stave off financial problems, which Thoo says is “a new way to engage the community.”

But what’s this new entrepreneurial approach mean for artists who have been showing their work at Intersection for years?

Resident artist Bernie Lubell said the “restructure” came as a shock: “The Intersection board speaks of a new ‘arts-centered entrepreneurial approach’ but I cannot see how this can be the basis for a community arts organization. The market becomes the only curator. The idea of the commons — and with it, any sense of public good — is rapidly disappearing from our landscape.”

Thoo says, “Like many organizations, the nature of Intersection’s individual patron constituency doesn’t immediately pay the bills. That’s not the demographic, and Intersection had historically not engaged with its constituency that way.”

Yet many community stakeholders felt blindsided by the decision, saying they weren’t given the chance to respond to the abrupt change.

“I think it is tragic to lose an institution that has supported the thousands of us, all diverse and different,” says artist Ana Teresa Fernandez, “without letting us have the opportunity to fight for them.”

While the press release stated that the public could get involved by sending their responses, comments, and memories to the address transition@theintersection.org, submissions are returned with an error message. So who’s listening?

“I understand having to tighten belts and make decisions, but this came out of left field,” said Wendy MacNaughton, who interviewed the residents from Fifth and Sixth streets for an Intersection installation that was later featured in her book, Meanwhile in San Francisco. “It’s terribly frustrating. I’m not sure what Intersection for the Arts would be without programming, curators or outreach and engagement staff. Working directly with artists and local communities is at the heart of what Intersection does.”

“If we really had the chance to mobilize the community, we could have had deep-down discussions,” says Chen. “If you’re going to have a major ideological shift, shouldn’t the community stakeholders have a say, too?”

Grassroots networks that enable people to move information and ideas to a broader audience are ultimately the ones to make change happen. In light of all of this restructuring, a Facebook group has materialized. The “After Intersection” group is engaged in online dialogue about what’s next and what’s being lost with the removal of the creative positions and programming.

Playwright Chinaka Hodge, whose latest show Chasing Mehserle was the last show to go up under the old framework, says that although she doesn’t know or purport to understand the intricacies of keeping a nonprofit afloat in an environment hostile to the arts, “I will say that the way the decision was made by the board and shared by the interim executive directors stands in stark opposition to the ethos and modus operandi I’ve always experienced at Intersection. I have considered Intersection my artistic home for over a decade, and in that time, most major decisions, tragedies and concerns have been shared in an open and honest space for dialogue. No gigantic shifts like this would have taken place under former leadership or in our old building without a real conversation with members of the full time staff, Campo Santo or with Artists in Residence, like myself.”

With this decision, Intersection is somewhat of a poster child for what’s going on in the arts in San Francisco. It’s often fought against the privileged members of the dominant cultural hegemony. But if that curatorial dimension is lost, what type of space will Intersection become?