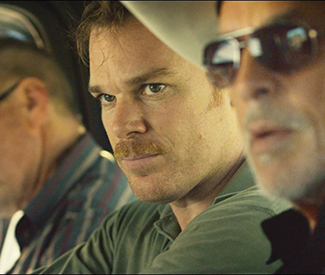 FILM For film fans, there’s a delight that comes from charting a talented director’s progress from obscurity to cult fame to “next-big-thing” status. I remember settling in to watch Jim Mickle’s 2010 breakout Stake Land (his first feature was 2006’s micro-budget creature feature Mulberry Street, which played multiple festivals on the genre circuit). I knew it was a vampire movie, a weary subject thanks to Twilight mania, but it soon became clear that Stake Land was not a by-the-numbers affair: Within the first five minutes, a crusty fang-slinger devours a human infant. “This is not a film to be fucked with,” I scribbled in my review, and filed away the name “Jim Mickle” for future consideration.

Last year, he returned with We Are What We Are, a remake of a Mexican chiller about cannibals fighting to keep their secret traditions alive despite pesky interference from the modern world. It was his third film with writing partner Nick Damici — also the lead in Mickle’s first two films, though he moved to a supporting role in We Are, which focused mostly on the teen sisters at its core. Set in rural upstate New York, We Are had its share of gore, but it also went deeper, teasing out a macabre and surprisingly detailed history of its flesh-eating family.

“To me, it’s more of a dark story about faith and religion,” he told me in an interview at the time. “I was much more interested in the girls’ story, and the story of a family trying to hold together after a tragic event.”

Now comes Mickle’s most accomplished film to date, and it’s even less overtly horror (though it contains a multitude of terrifying moments): Cold in July, a thriller ranging across East Texas, circa 1989. The script by Team Mickle-Damici is adapted from the novel by Joe R. Lansdale, who — buckle up, cultists — also penned the short story which spawned 2002’s Bubba Ho-Tep. That said, there are no supernatural elements afoot here; all darkness springs entirely from the coal-black hearts beating in its characters.

Well, some of its characters. Cold in July begins with a killing, but the trigger hand is attached to mild-mannered frame-store owner Richard Dane (Dexter‘s Michael C. Hall, rocking a splendid mullet). The masked man he shot was breaking into the Dane family home; Richard was just protecting his wife (Vinessa Shaw) and young son (Brogan Hall). That he accidentally, kinda, nailed the burglar — spraying brains everywhere, necessitating amusing later scenes of weary clean-up and furniture replacement — is breezed over by the police (including a cowboy-hatted Damici). “Sometimes, the good guy wins,” they assure him.

The good guy/bad guy dynamic is twisted, tested, and taken to extremes as Cold in July continues; it’s the sort of film best viewed without much knowledge of its plot twists, which are numerous and cleverly plotted. (Which is to say: You may read on, genre junkie, without fear of spoilers, because I don’t wanna ruin anyone’s viewing enjoyment.) The day after his run-in with vigilante justice, Richard realizes he’s the number one conversation topic in his small town, and his shiny local-hero status has attracted the attention of the dead robber’s father (Sam Shepard), just out of the clink and skilled in the art of Cape Fear-style menace.

What happens next is best left a surprise, though it does involve Don Johnson as a flamboyant, convertible-driving pig farmer; plenty more bloodshed; a meeting at a drive-in that just happens to be screening Night of the Living Dead (1968); and the line “You don’t wanna fuck with the Dixie Mafia.” Throughout, Cold in July expertly works its 1980s setting as both homage to and embodiment of the era’s gritty thrillers; its synth-heavy score and neo-noir lensing (by frequent Mickle collaborators Jeff Grace and Ryan Samul, respectively) and the casting of Wyatt Russell (son of Kurt; he was also in We Are What We Are) in a key role add to the feeling that Cold in July was crafted after much time spent in the church of St. John Carpenter. There’s humor, too, deployed with careful timing that doesn’t compromise the slow-burning tension that builds throughout — as when Richard celebrates some good news by headbanging to period-perfect power rock in his enormous, wood-paneled station wagon.

Most intriguingly, and for all its retro trappings, Cold in July offers a very modern exploration of masculinity via all of its leads, though Richard is obviously the embodiment of this theme. “I’ve been waiting for something big like this,” he says to his wife before slithering away on a secret road trip (she thinks he’s talking about landing an important new client). Unlike Viggo Mortensen’s secret gangster in 2005’s A History of Violence, which begins with a similar premise (family guy shoots someone in self-defense, opening a can of worms in the process), Richard has zero past aggression to draw on; dude’s got a history of mildness — with a heretoforth untapped curiosity about the wilder side of life awakened by a sudden bloody act. Once again, Mickle has delivered an unfuck-with-able film. Can’t wait to see what he does next. *