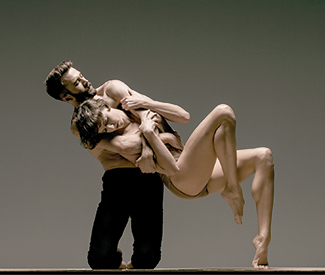 DANCE Alonzo King’s The Steady Heart (which opened his spring season at YBCA May 21) is among his most dramatic and, thematically, most explicit works. It also just may be one of the finest he has yet created for his 11 Lines Ballet dancers, three of whom — David Harvey, Caroline Rocher, and Meredith Webster — will retire at the end of this season.

In many of King’s pieces, small, individualized sections accumulate into collage-like structures. There is always flow but not necessarily direction. Steady however, has a trajectory. It starts with a duet for Kara Wilkes and Robb Beresford; King closes the work with the whole ensemble evoking a timeless, pulsating, yet ever-changing cosmos. Lama Gyurme’s “The Lama’s Chant: Songs of Awakening” sets the tone for a huge finale with waves of dancers stumbling, falling, rolling, and rising. Webster streaked through them but was eventually absorbed into something larger than herself. With Axel Morgenthaler’s fluidly shifting light design, the dancers moved in and out of our vision with a screen descending on them right before the final curtain. The falling snow in the background, however, was something of a cliché.

Trying to find balance within the body and outside it is a theme that is fundamental to King’s thinking. In Steady it takes the concrete shape of a small, destructive figure (Anthony S. Finley) in a World War I uniform. We only see him twice but his existence, and what he represents, permeates all of Steady.

The sculpturally elaborate opening duet begins with simple touches by two young people, she in a pretty frock, he bare-chested and in jeans. Handholding evolves into an increasingly intricate and unrelenting struggle. Every body part from necks to limbs (Wilkes hangs off his and dips between Beresford’s legs) is brought into action. They reach, grab and shove; she sinks into his arms, he flips her overhead. Yet there is no sense of violence just a feeling of inevitability and, perhaps, a need to reach out as a process of self-definition. They communicated an Edenic innocence until the soldier figure pointed his gun at them.

Steady‘s middle section explodes into something dark and chaotic. With John Oswald’s score building into frightening intensity, the magisterial Courtney Henry with Rocher and Yujin Kim takes command of the stage. They stride, turn, and extend limbs; yet they also curl and embrace the ground. In a final image they call up Rodin’s three “Shades.”

An eloquently expressive solo for Babatunji, performed in silence, then cleared the air, with the dancer sinking, turning, and opening himself to space. A unison walking section felt calm until individuals broke out, most prominently the powerful Michael Montgomery’s whose whipping turns and isolations shook his body into spasms. David Harvey, with Webster, Wilkes and Kim, looked like catastrophe survivors. Bent over they dragged their broken bodies across the stage. Again and again, they forced themselves into upright positions to keep on struggling. At one point Harvey looked like a boxer responding to an unseen opponent’s thrusts and punches.

A second trio’s intent eluded me. The soldier from the opening section re-appeared against a white screen. He elicited a duet for Harvey and Kim in which he offered himself and a rolling stage light as support for the panic-stricken Kim, who never raised her gaze. In the follow-up, a darkly lit duet, Webster — she of the steady heart — repeatedly faced the soldier’s gun but, turning its nozzle away, shoved him into the wings.

Steady‘s dancers, including the three departing ones, shone at the top of their expressive abilities. They were well-supported by the beautifully chosen music, and Morgenthaler’s majestic employment of light and space.

The evening opened with excerpts from three earlier King choreographies: Klang (1996), The Radius of Convergence (2008), and Koto (2002). It was good to see the women in point shoes, a practice that King rarely makes use of these days. The first two works also played with the traditional ballet soloist-corps format. The most intriguing standalone came in Klang; it contrasted frozen unison images with high-energy individual dancing. In the male trio, Beresford’s strutting and pugnacious stances had an almost comic flavor to them, while the women’s slinking kicks and hip poses dripped with old-fashioned coyness.

The male quintet in Radius featured solos for each dancer with Montgomery the outside observer until he jumped into the assembled quartet’s arms. They finally left him flat on his back. Radius segued without a break into a section from Koto. An ensemble piece, it showcased Jeffrey Van Sciver, a tall reed-thin dancer in his second year with Lines. His whiplash turns and long leaps felt like a storm invading a placid world. Unfortunately, Miya Masaoka’s koto music on tape jarred. It sounded tinny and sharp. Besides, I missed seeing her perform live in that huge red Colleen Quen gown of hers.