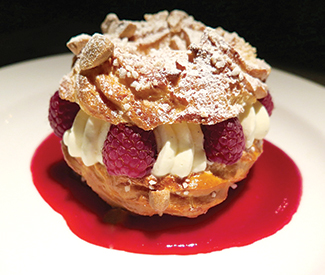 TABLEHOPPING First up in a slew of new openings: this hot little Frenchie number that just arrived downtown, Gaspar (185 Sutter, SF. www.gasparbrasserie.com). The two-level brasserie has a downstairs bar and casual dining area — you can sink into a deep red banquette while enjoying a Champagne cocktail — while the upstairs has a more spacious bar area and dining room (the scene of your next hot date). The place is gorgeous, with sexy lighting, eye-catching décor patterns, and more. The menu by Chris Jones boasts some classics like grand plateau of seafood, escargot, chickpea panisse cakes, and entrecote. But you’ll spot California seasonality throughout the menu as well.

The bar menu also deserves your attention: everything from cheese and charcuterie to a burger (to which you can add Camembert, Raclette, or Cambozola). The French-inspired cocktails by Kevin Diedrich will tempt you to over-indulge, featuring everything from Champagne to brandy and Calvados. Save room for dessert by Chucky Dugo, previously of Slanted Door Group — they’re as tasty as they are pretty. Request the Paris-Brest for dessert! Your server won’t bat an eye, but your date might.

If you’re looking for a place a little less swish, another downtown newcomer is Bartlett Hall (242 O’Farrell, SF. www.bartletthallsf.com), a stylish tavern — but not too stylee: It’s got TVs, so you can kick back and watch the game. Plunk yourself down at the super-long bar for a barrel-aged cocktail and some of chef Eman Eng’s delicious small plates like chicken wings with fermented pepper sauce and miso- and maple-glazed ribs. Or you can grab a table to share a carbonara flatbread and farro risotto with vegetables. Go full-tilt on a Maverick burger, made with more butter than your doctor would ever want to know. (I won’t tell.)

You’ll note some brewing equipment in the back — Bartlett will be pumping out a couple house beers soon, but there are plenty of other brews to choose from in the meantime (and wines by the glass too). Best of all: the Hall’s open late! Daily hours 11am–2am, with lunch 11am–2:30pm, happy hour 2:30pm–5:30pm, dinner 5:30pm–10pm, bar menu (including snacks, pizza, and burger) 10pm–1am, and snacks only from 1am–2am.

Fans of the pop-up(ish) Chubby Noodle at Amante in North Beach are going to have one more opportunity to dig into chef Pete Mrabe’s crave-able vittles with a new Chubby Noodle (2205 Lombard, SF. www.chubbynoodle.com) in the Marina in the former Gatip Thai. Planned dishes include garlic noodles, raw seafood dishes, ramen, pork buns, dumplings, and more. Mrabe’s biz partner, Nick Floulis, is coming up with some clever wine-based cocktails, like the Cold Tea (afterhours drinkers and diners will get the reference), plus a bunch of wines — and sake! — on tap. This Chubby’s just doing a soft opening for now, starting Thursday May 29, and will only be open Thu–Sat 5pm until 12am to start, serving about 30-40 people a night. Hours will expand in a few weeks. Like your waistline.

Ten-hut! In the Presidio, there’s a new restaurant called The Commissary (101 Montgomery St., on the Main Post of the Presidio, SF. www.thecommissarysf.com) from the Presidio Trust, Traci Des Jardins, and Bon Appétit Management Company. The 112-seat space is offering a Cal-Spanish menu (under culinary director Robbie Lewis and chef Reylon Agustin) — bring on the sardines, cured tuna with radishes and fennel pollen, salt cod fritters, and fennel and baby artichoke paella. Cocktails, check. It’s a handsome space, simple and American (it’s in a former mess hall that dates back to 1895) and the shaded front porch is where you’ll want to be on a warm day; open now for lunch and dinner, with light breakfast and coffee coming June 2, and Sunday brunch June 8. At ease.