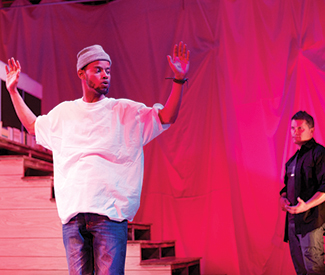 
Those are the parameters for a hungry young mind in a black male body in Oakland in 2008 — at least according to Watts (Michael Wayne Turner III), who has been living by them for years. Watts became a shut-in after his 10-year-old self took in the cold fact and wider implications of the 1991 Rodney King beating. Seventeen years later — which is how many dead young black men later? How many incarcerated bodies? — Watts lives a life of restless confinement with his sometimes prodding but understanding mother, Willie (Halili Knox).


Quick, a little acerbic but generally kind, Watts (played with a frank charm by Turner) is a voracious reader and a self-styled cartographer, aware of every square mile of his city and yet afraid to physically set foot in any corner of it. As if to underscore the danger he perceives outside, his siblings are more or less MIA. As if to underscore the impossibility of holding it all at bay, he eventually finds a guilt-ridden white guy (Dan Wolf) living as a tenant in his own small bedroom. More ironically still, the New Year’s Day he resolves to finally leave the house is the day a BART policeman named Johannes Mehserle (in what was later deemed an accident) takes Oscar Grant’s life at Fruitvale Station.


Like her main character, playwright and poet Chinaka Hodge is mapping her world here with a keen, obsessive focus. In Chasing Mehserle, Hodge, an Oakland native, picks up again the lives of the Oakland family she introduced in Mirrors in Every Corner, her 2010 debut. Once again, too, she teams up with Intersection for the Arts, Campo Santo, and Youth Speaks’ Living Word Project to realize her sure, capacious imagination in what directors Marc Bamuthi Joseph and Sean San José ensure is an overall vibrant transposition to the stage.


Act II is somewhat less sure and consistent in its unfolding than the strong opening act, and some of the staging (especially the video projections against a slack fabric wall) is less effective than it might be. But throughout Chasing Mehserle is strong acting, lyrical yet rooted dialogue, redolent ensemble movement, and scenes that range from effortlessly funny to startlingly potent.


Unfolding on and around a makeshift playing area at Intersection (where a rolling set of wooden stairs, courtesy of designers Evan Bissell and Tanya Orellana, serves variously as stoop, bedroom, and jail cell), the story comes narrated by a series of characters beginning with Watts, who tells us "his" play is not about Oscar Grant but about himself. Then again, we come to see that Watts’ vision of things is skewed by his long isolation. He may be well-read, he may have intricately mapped his city, but once he steps out in it there is much that eludes him, and much he gets wrong, even tonally — his fictional sidekick and co-narrator, Puck (Danez Smith), balks sometimes at the 10 dollar words he’s made to speak. A chorus of four (Tristan Cunningham, Tommy James Shepherd Jr., Isiah Thompson, and Johnathan Williams), that channels the human landscape in some spare and evocative choreography, also serves as a casual, no-nonsense counterpoint to Watts’ rhetorical flourishes and emotional extremes.


This is all the more crucial a corrective when Watts, learning of the death of Grant, takes it upon himself to track down and kill Mehserle, who has fled the Bay Area and gone into hiding. Watts, in other words, addresses his longstanding fear of white authority, and specifically the police, by turning the tables. But the road he sets down is complicated and confused. His unwanted partner is Lyle (the aforementioned white guy bunking in his bedroom). His perspective is in some ways fresh, in others myopic and deeply problematic. We root for him, and recoil from him. Hodge has created a wonderfully flawed hero, around whom a more complicated topography presents itself, and with whom we encounter a truer and more compassionate grasp of our fraught, divided, unequal, haunted, absurd, yet yearning environment.