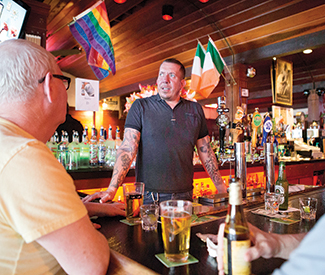 The Internet jukebox may be the second worst thing that has happened to drinking since mankind invented alcohol. The first worst thing was the hangover, of course, but that has existed since the morning after alcohol was discovered. It took millennia for villains to come up with something nearly as vile as a hangover, and when they did, it was the Internet jukebox.

Think about it. The jukebox is one of the best ways for a bar to create its vibe. If you go to Zeitgeist, you know you’re going to hear Slayer. You may not like Slayer, but you at least know what you’re getting into and you accept it as part of the experience. The Internet jukebox pisses on all of that by taking away the establishment’s ability to curate its soundscape. Now any asshole can ruin everybody’s night by throwing a $50 bill in the machine and playing two hours of 2 Chainz. These people need to be taken out back and beaten with any number of chainz.

This was all part of the rant I was giving Alex as we sat on the barstools at Last Call (3988 18th St, SF. 415-861-1310). It was happy hour on a Tuesday and I was already a couple drinks in. One of the many things that makes Last Call great is that it doesn’t have an Internet jukebox. Instead, it has one that the owners filled with music they knew their customers would enjoy. Considering Last Call is a neighborhood bar in the Castro with a mild Irish pub feel to it, the box is filled with music like Madonna, The Smiths, U2, Kylie Minogue, and Cher. And of course, lots of disco. And you know what? It’s perfect.

There’s a lot more that makes Last Call great though. Fresh flowers always adorn the back bar, there’s a small library one can peruse, the drinks are stiff as hell, and there’s a cool ’70s-looking fireplace to keep you warm on one of San Francisco’s many chilly nights. But more than anything, it’s the friendliness of the bar that makes it great.

Last Call is a quintessential neighborhood bar. The regulars all know one another — but are more than welcoming when someone new comes in. While waiting for Alex to show up I sat there bullshitting with a handful of guys who were joking that, while they hated gym class in high school, they’d probably love it now because of all the hot boys.

Then there was Karl, the super duper nice happy hour bartender. Each time, just before my little bowl of popcorn went empty, he would appear and fill it again. Karl must’ve had that bartender sixth sense that told him I desperately needed food if I was going to continue downing vodka sodas. All this was happening while people down at the other end of the bar were yelling and high-fiving each other over something one of the Giants did. There wasn’t a shitty-seeming person in the whole joint; everyone seemed to love Last Call as much as it loved them.

“So in conclusion, I say ‘fuck the Internet jukebox’ and all the spineless bastards who invented it,” I finished haranguing Alex. “Jesus dude,” he responded, “All I did was ask how you were doing.” And to that I got up, fed a dollar in the jukebox and put on some Donna Summers…or at least I wanted to. The thing wasn’t on, since the Giants game was.