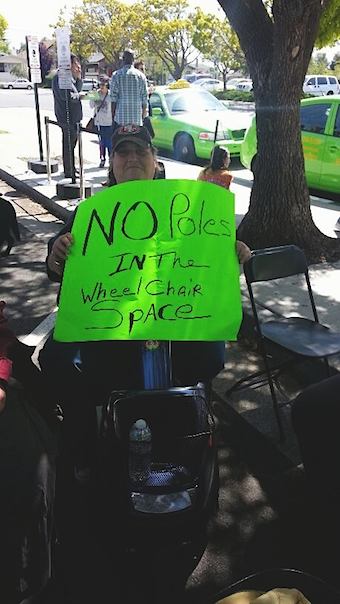 A group of wheelchair users and others from the disability community plan to speak out against BART’s new “Fleet of the Future” at tonight’s BART Board of Directors meeting — again.

They’ve rallied for months, but so far, it seems the shiny new trains will be worse off for people with disabilities than the current fleet.

The Fleet of the Future has a number of futuristic bells and whistles: stop arrival video screens, cockpit touch screens, multi-bike racks, and digital outer signage. The new trains will roll out in 2015, and by 2017 BART’s fleet will begin to be fully replaced.

So the new trains are the new gold standard, but they won’t serve everyone well. A three pronged pole near the center of the car has the disability community up in arms, because they say it is so close to the doorway that it would obstruct powered wheelchairs entering the cars.

“We understand the poles are for people who may need more balance or support,” said Peter Mendoza, a community organizer at the Independent Living Resource Center. We spoke with him for a longer piece on Bay Area transit issues, “Waiting for Transit, [5/6].”

But for Mendoza, the issue is one of equity. The Americans with Disability Act guarantees equal access to public transit for people with disabilities, and the new poles make entry difficult for those with motorized wheelchairs.

“We don’t feel they should be in the path of travel of the BART train,” he said. Mendoza uses power wheelchairs regularly.

The advocates from the Disability Organizing Network plan on speaking at the BART Board of Directors tonight, they said on their Facebook event page.

“Pain day, but I think I can get there,” wrote one member on the Facebook event’s wall. Apparently even chronic pain won’t stop the community from advocating.

But despite several recent protests from the disability community, there’s been little change to the position of the poles, though the three columns were raised some.

The board had aimed to discuss the Fleet of the Future at tonight’s meeting, but it has since been pushed back till June, BART spokesperson Alicia Trost told us.

“From day one, [the task force] identified the pole as being a problem,” BART Access Coordinator Ike Nnaji told us, but apparently, the engineers and the BART board didn’t listen.

The Guardian asked BART board member Tom Radulovich if the pole will be removed. He responded, “I don’t know,” though he said he never liked the poles.

Shortly before we went to press, we talked to Mendoza yet again, just as he left the Accessibility Task Force to travel to attend the board meeting tonight. When he got off his train at 19th street BART station, he had to go back to the 12th street station, delaying his plan to speak for disability access.

The elevators were out of service.