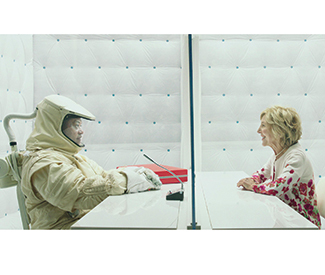 FILM As far as Hollywood is concerned, it’s already been summer for weeks, with superheroes (Captain America and Spider-Man have had their turns; X-Men: Days of Future Past opens Fri/23) and monsters (Godzilla) looking mighty comfortable atop the box office. But the season is just getting started, screen fiends, and there’s plenty more — maybe too many more, if you’re operating on a limited popcorn budget — ahead. Read on for a highly opinionated, by-no-means-comprehensive guide; as always, dates are subject to change. (And keep reading for a list of local film festivals, too, since the healthiest diet is always a balanced one.)

The first post-Memorial Day weekend unveils Angelina Jolie (dem cheekbones!) as Sleeping Beauty’s worst nightmare in Maleficent, probably the biggest Disney casting coup since Johnny Depp sailed to the Caribbean. First-time helmer Robert Stromberg has a pair of Oscars for his art-direction work on Avatar (2009) and Alice in Wonderland (2010); if this dark fantasy clicks with audiences, expect a raft of live-action films starring Disney’s ever-growing stable of villains (fingers crossed for Ursula the Sea Witch next).

If fairy tales aren’t your thing, add thriller Cold in July to your calendar (like Maleficent, it’s out May 30). It’s the latest from genre man Jim Mickle (2013’s We Are What We Are), with his highest-profile cast to date. Dexter‘s Michael C. Hall, rocking a mullet, plays a small-town Texan whose unremarkable life goes into pulpy overdrive after he kills a burglar, angering the man’s ex-con father (Sam Shepard). But nothing is what it seems in this twisty tale, which also features Don Johnson and a synth score — both stellar enhancements to the film’s late-1980s aesthetic.

Moving into June, sci-fi thriller Edge of Tomorrow  has Tom Cruise saving the world — just another day on the job for the suspiciously ageless star, though he apparently lives the same day over and over here. Look for director Doug Liman (multiple Bourne movies) and co-stars like Emily Blunt and Game of Thrones‘ Noah Taylor to add some depth — though, OK, this’ll probably still be a one-man show. Never change, Tom. Elsewhere June 6, erstwhile Divergent ass-kicker Shailene Woodley aims to prove she’s not just the poor man’s Jennifer Lawrence with young-adult weepie The Fault in Our Stars.

June 13, undercover cops Schmidt and Jenko — played by the likable team of Jonah Hill and Channing Tatum — return for more jokes (and winks, because they’re in on the joke too, you guys!) in 22 Jump Street. Far less comedic, and far more brain-melting, is sci-fi drama The Signal, which starts off like a typical road-trip movie, then switches gears a few times before slam-banging into weirdness so out-there it’s almost (almost) a spoiler to note that Laurence “Morpheus” Fishburne plays a key role.

The following week (June 20), Aussie filmmaker David Michôd — whose gritty 2010 Animal Kingdom became an insta-classic of the crime genre, and launched the stateside careers of Jackie Weaver and Joel Edgerton — reunites with Kingdom star Guy Pearce for The Rover, the outback-set tale of a man seeking revenge on a gang of car thieves. In an intriguing casting choice, former vampire Robert Pattinson co-stars as a wounded baddie forced along for the ride.

Next up, June 27 unleashes Transformers: Age of Extinction. Memo to the world: Until we all agree to stop seeing these movies, Michael Bay and company will keep grinding ’em out. At least this one is LaBeouf-less.

Ahead of the long Fourth of July weekend, July 2 unleashes saucy comedy Tammy, which stars Melissa McCarthy (she also co-wrote the script) and Susan Sarandon as a road-tripping granddaughter and grandmother. Or, you could check out Eric Bana as an NYPD detective who teams up with a priest (Edgar “Carlos the Jackal” Ramírez, recently cast in the Swayze role in the highly unnecessary Point Break remake) in Deliver Us From Evil; despite sharing a title with Amy Berg’s harrowing 2006 doc about pedophiles in the Catholic Church, it’s about demonic possession — but is still probably less frightening than the Berg film, to be honest.

July 11, Richard Linklater’s Boyhood has a gimmicky premise — filmed over 12 years, it charts the coming-of-age of a child, and his relationship with his parents (played by Ethan Hawke and Patricia Arquette) — but also glowing reviews from its film festival stints. And, just when you thought it was safe to go back to the banana aisle, Dawn of the Planet of the Apes arrives, laying further waste to a San Francisco that already took a beating in the first film, not to mention losing most of its downtown to Godzilla and friends just a week ago. Andy Serkis returns as chimp king Caesar. Also: Roman Polanski’s latest, Venus in Fur — based on the David Ives play, and starring Polanski’s wife, Emmanuelle Seigner — arrives on our shores after picking up a César award for the director in France.

Andy and Lana Wachowski’s latest eye candy-laden epic action fantasy, Jupiter Ascending, is about an ordinary human (Mila Kunis) who turns out to be Neo the One, er, royalty from another planet. Based on production stills, this film also features Channing Tatum flying through the air shooting guns and stuff. July 18 also brings The Purge: Anarchy, sequel to last year’s sleeper hit about a near-future America that allows a crime spree free-for-all one night per year. The follow-up lacks Lena Heady — but it does have Michael K. “Omar” Williams, and the characters actually leave the house this time.

Then, on July 25, choose your hero: Dwayne “The Rock” Johnson sporting a hat made out of a lion’s head (and, apparently, beard made out of yak hair) in Hercules, or those dancin’ kids of Las Vegas-set Step Up All In. (For those keeping score, this is the fifth Step Up film.) Plus, there’s Woody Allen’s 1920s-set Magic in the Moonlight, starring Emma Stone as a psychic and Colin Firth as the skeptic who falls for her. Sounds kinda twee, and Allen’s private life remains controversial, but that cast, which also includes Marcia Gay Harden and Jackie Weaver, is all kinds of dynamite.

August begins with a bang — Marvel’s hotly-anticipated Guardians of the Galaxy, which just about broke the Internet when its first trailer rolled out in February, is out on the first — before meandering a bit. Taking a break from her own Marvel duties, Scarlett Johansson (so great in Under the Skin) plays a different kind of superhuman in Luc Besson’s Lucy, while the live action-CG mash-up I’m not sure anyone was really begging for, Teenage Mutant Ninja Turtles, also takes a bow (both Aug. 8).

As the summer winds down, Phillip Noyce (2002’s The Quiet American) strays onto YA turf with an adaptation of Lois Lowry’s The Giver, with Jeff “The Dude” Bridges playing the title role, and Brenton Thwaits (who also stars in The Signal, above) as his protégé. Also out Aug. 15, The Expendables 3 adds Harrison Ford, Antonio Banderas, and Wesley Snipes (!!) to its cast o’ aging action hunks. Don’t you worry, Nic Cage — there’s still room for you in the inevitable part four. And don’t miss The Trip to Italy, which re-teams British comedians Steve Coogan and Rob Brydon for a foodie road trip that will make you guffaw (at the impressions) and drool (over the plates of pasta).

Labor Day looms as Robert Rodriguez brings Frank Miller’s Sin City: A Dame to Kill For, which looks to be as visually stunning as its 2005 predecessor, if not much friendlier to the female perspective; a sports drama inspired by Concord’s own De La Salle High School football team, When the Game Stands Tall; and yet another YA adaptation, If I Stay, starring Chloë Grace Moretz, who is one of the more dynamic teen actors of late, and may make this girlfriend-in-a-coma tale livelier than it sounds. *

Martin Scorsese Presents Masterpieces of Polish Cinema (June 14-Aug 23, bampfa.berkeley.edu) Rare and important works by Andrzej Wajda, Jerzy Kawalerowicz, Wojciech Has, and others — and since Uncle Marty’s in charge, expect glorious digital restorations across the board.

Frameline (June 19-29; www.frameline.org) The oldest and largest fest of its kind, the San Francisco International LGBT Film Festival has been programming the best in queer cinema for 38 years.

San Francisco Jewish Film Festival (July 24-Aug 10; www.sfjff.org) Also the oldest and largest fest of its kind, the SFJFF presents year-round programming, though this fest, now in its 34th year, is its centerpiece event.