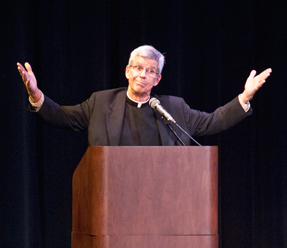 The University of San Francisco president who sold off beloved community radio station KUSF in 2011 is stepping down in August, the university recently announced. Father Stephen Privett is known by elected officials and higher-education folks as a strong, stalwart 14-year leader of San Francisco’s oldest university. But to local artists and music lovers, Privett was and will always be the axe-man of KUSF.

And no, we don’t mean he shredded on the guitar.

KUSF continues to rock on as San Francisco Community Radio, but in 2011 its spot on the terrestial dial was sold and closed.

The day it went down, KUSF radio’s employees and volunteers were unexpectedly tossed out of their studio, the locks were changed, and they learned then and there that the station was sold. The signal went dark, radios went silent. The USF-hosted radio station long broadcasted renegade tunes on 90.3 FM, with programming in a variety of languages few other stations replicated.

Privett brought the hatchet down on the beloved radio station, silently. The backroom deal to sell KUSF’s spot on the dial to a Southern California classic music radio station was brewed largely in the dark, with only two KUSF employees told before the day the station was shuttered. Both were silenced under non-disclosure agreements, according to news reports at the time.

In his farewell interview with USF’s campus magazine, Privett touched on his controversial decision.

“KUSF was originally student run and operated, and a valuable learning laboratory. It morphed over time into a community enterprise where only 10 percent of the workers were USF students, while USF remained 100 percent responsible for its operation and costs.

Our mission is to educate in the Jesuit Catholic tradition, not to provide opportunities largely for non-students. I am obligated to spend tuition dollars to support student learning, and that’s how the proceeds were used: to fund scholarships and academic programs.

USF continues to offer students solid learning opportunities at KUSF.org, which is entirely student-staffed and streamed live on the Internet.”

“Sadly, a black cloud continues to linger over Father Privett’s legacy, due to his shady and dishonest actions in killing one of the largest and most vital community radio stations in San Francisco,” former KUSF Music Director (and DJ) Irwin Swirnoff told the Guardian. “With all the drastic changes the city has gone through since the sale of the station, the loss of KUSF is extra devastating as the need for a spot on the terrestrial dial for artists, activists, musicians, and underrepresented communities.”

Privett has led San Francisco’s oldest university for 14 years, and this will be his last semester presiding over the Jesuit institution. This weekend, May 16-17, Privett will send off a graduating USF class for the last time. Meanwhile, the fate of the former KUSF-in-Exile, now SFCR, is still in limbo.

The staff and volunteers of KUSF filed an appeal of the sale of the station with the Federal Communications Commission back in 2012, former KUSF DJ Damin Esper told the Guardian. The appeal has neither been ruled on nor dismissed.

SFCR also filed with the FCC for a new spot on the dial, 102.5 FM. The frequency is known as Low Power FM, which has a variable broadcast strength. On its blog, SFCR says the broadcast range of 102.5 FM is as of yet unclear.

But what is clear is that no matter what his accomplishments at USF, Privett will long be remembered in San Francisco as the man who shut down KUSF.

“The station was gutted and demolished; dorms now stand in its place,” former DJ Andre Torrez told the Guardian. “He did what he felt he had to do in order to make his instant millions. Our vast vinyl library was handed over to the Prometheus archive, with no option for the Save KUSF volunteer/ activist group, which still broadcasts online only, to purchase or access the collection.”

“We were major. We had Nirvana, The Ramones, Metallica, Iggy, Green Day, and more recently Ty Segall all as live in-studio guests when they were emerging artists or on the brink of breaking through. Father Privett probably wasn’t fully aware of how important KUSF was, but we certainly would have let him know how we felt had he cared or asked.”

“He has been instrumental in killing community terrestrial radio in San Francisco,” Torrez said, “and for that, he should be ashamed.”