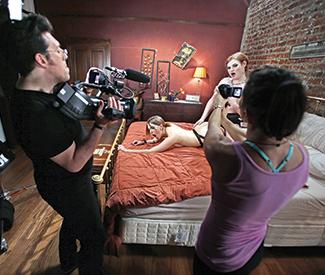 A website and letter-writing campaign against a statewide mandatory condoms-in-porn bill launched on Monday.

“AB 1576 is opposed by both adult film performers and filmmakers because it puts performers’ health at risk,” AB1576.org states. “It would also effectively force California’s adult film industry out of state and underground, putting thousands of people out of work and costing the state a multi-billion dollar business.”

The subject of Kink.com’s possible move from the historic Armory building in the Mission District is the topic of a story in this week’s Bay Guardian, “Getting the Kink Out, [5/14].” The Division of Occupational Safety and Health (formerly Cal/OSHA) fined Kink.com $78,000 for safety violations related to the alleged HIV infection of two actors on the set of a Kink.com shoot last year.

The stop AB 1576 website also calls out the AIDS Healthcare Foundation, largely seen as the driver of the mandatory condom bill. It claims the foundation is pushing the bill for a “hidden agenda.”

AIDS Healthcare Foundation spokesperson Ged Kenslea told us condoms were already essentially mandatory under state law, given workplace protections against contact with infectious materials, and enforcement of those regulations is the organization’s goal.

“It’s not a hidden agenda,” he said,”it’s a pretty straightforward agenda.”

“Federal and state OSHA statutes require condom use,” Kensela said. “That’s something (Kink CEO) Peter Acworth has not been compliant with. While he threatens to go to another state, those statutes apply there as well.”

Not just performer but HUMAN rights too @kinkdotcom Shame on you for taking away performer rights, Isadore Hall #stopab1576 (cont…

So is the AIDS Healthcare Foundation picking and choosing which regulations it cares to emphasize?

“We do not have a realistic expectation,” Kensela said, “that condom use for oral sex is necessary or practical, and similar with goggles.”