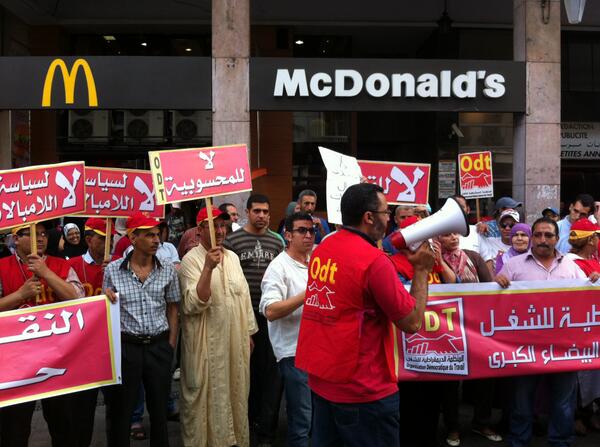 Today [Thurs/15], fast food workers worldwide rose up for fair wages and the right to unionize. The protest spanned 150 US cities, as well as 33 countries across the world. Twitter flooded with photos of protesters in Argentina, France, Morocco, and Japan.

And protesting fast food workers in the Bay Area increased in number thanks to new workers joining the movement in Pleasanton, Livermore, and Oakland, workers told us.

The Oakland march picketed a McDonald’s on East 12th Street, and a Burger King at on 13th and Broadway, among other locations.

Martinez is a student, seemingly fitting in the conservative national narrative of workers who don’t deserve to earn more. But Martinez says the pay is not enough to pay for basic needs while he attends school.

And many workers we talked to before today’s strike also support their families.

“I haven’t had a raise in three years,” a McDonald’s worker who identified herself as Markeisha told us just after she went out on strike from an Oakland McDonald’s in December. Markeisha said she has two children and she is their sole provider.

Another common misconception is that workers are merely fighting for higher wages. Although raises are among their needs, fast food workers also contend they are a vulnerable workforce. Wage theft, low salaries, slashed hours, and punitive measures for speaking out are among the grievances fast food workers allege against their bosses at chains including McDonald’s, Burger King, and Taco Bell.

“One thing we found when talking to fast food workers was wage theft issues were high,” Service Employees International Union Local 1021 Political Director Chris Daly told the Guardian. “When you’re making $8-11 an hour, a couple shifts can be the difference between paying the rent or not.”

Workers we talked to at the last strike alleged their jobs at McDonald’s and Kentucky Fried Chicken paid so low they had to also enroll in CalFresh (food stamps) to afford food. That sort of government subsidy for big business puts a strain on the taxpayer, former Labor Secretary and current UC Berkeley professor Robert Reich noted on his blog.

McDonald’s alleged last year’s actions were strikes-in-name-only. “To right-size the headlines, however, the events taking place are not strikes. Outside groups are traveling to McDonald’s and other outlets to stage rallies,” McDonald’s wrote in a press statement.

But it seems McDonald’s is worried about how the protests will affect its bottom line. As first reported by Salon, McDonald’s public SEC filings report the company list protests and strikes in its “Risk Factors and Cautionary Statement Regarding Forward-Looking Statements.”

“The impact of campaigns by labor organizations and activists,” is one forward looking risk to the company’s future earnings, McDonald’s wrote in their filing, “including through the use of social media and other mobile communications and applications, to promote adverse perceptions of the quick-service category of the IEO segment or our brand, management, suppliers or franchisees.”

Below are images from #FastFoodGlobal strikes and protests in Oakland and around the world.

Lots of moms and kids among the protesters at #Oakland McDonalds #FastFoodGlobal pic.twitter.com/hXTykUQcPx

Bet you were wondering “What about Nepal?” KATMANDU #FastFoodGlobal pic.twitter.com/ywPlS8Xyhf