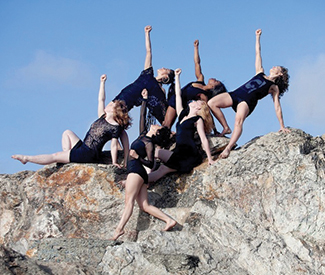 DANCE The Mother’s Day weekend premiere of Sarah Bush Dance Project’s reconceived 2011 Rocked by Women was a tenderly raucous, often humorous celebration of an overly sentimentalized holiday. Bush looks at the education of a “girlchild” in the “not-so-promised land” by paying tribute to the mothers who raised us physically. But it was pioneer “mothers” — the feminists of the 1970s, the lesbian activists of many decades, artists and entrepreneurs like Olivia Records and Club Q — who made us the women we have become. Their legacy, Bush realized, was in danger of being forgotten by the current generation of women for whom the battles had been fought. Molded into a convincing piece of dance theater, Rocked by Women is a joyous and self-effacing acknowledgement of prices paid and gains won.

Just as music energized the civil rights movement of the 1960s, feminism in its earlier and later stages drew inspiration from talented musicians who started the women’s music movement. Bush drew on that rich heritage and shaped Rocked‘s three parts around contributions from two generations of songwriters such as Holly Near, Cris Williams, and k.d. lang, as well as Janet Jackson, Tracy Chapman, Missy Elliott, and Bikini Kill. Julie Wolf also contributed music arrangements and wrote original songs.

Rocked derives its impressive energy as much from music as from dance. Yet Natalie Aceves, Krystal Bates, Joanna Gartner, Bianca Mendoza, Juliann Witt, and Bush performed with an intuitive grace, passion, and an almost delirious delight at the choreography’s lush physicality. Much like works by Dance Brigade (Bush’s home company), Rocked contains personal material that also feels universal, speaking to those who don’t fit into given norms, and who have had to struggle to become who they are meant to be. Using contact improv, disco, jazz, and hip-hop in an almost narrative way, the individual dances comment on the songs but do so from a distance. At its best, Rocked became a weighty yet explosive expression of the power of an indomitable spirit and embracing courage.

The show opened and closed with Near’s iconic “Mountain Song.” At first, a trio of kicking “babies” are cuddled by their mothers. It ends with the dancers facing the audience in a sing-along about the unstoppability of women who refuse to have “their dreams taken away.”

Each of the work’s movements explored a different aspect of growing up. In “Her Childhood,” the dancers engaged in circle games and playfully sculpted a mountain from their bodies. One of them triumphantly climbed it. They also donned masks cut from fashion magazines and tugged and pushed their bodies in an attempt to reshape them. Here, ballet’s preoccupation with perfection came in for a kick or two. The choreography had a sense of humor but you couldn’t miss the underlying pain and rage.

The emergence of a young girl’s sexual identity permeated the whole piece and resulted in a number of awkwardly tender duets. In one, the group’s smallest dancers, Mendoza and Bates, discover each other’s differences: Mendoza is Latina, Bates African American. Second movement “Her Adolescence” brings group pressures and rejections, driving and exploring of sexual identity; the choreography veered between plaintive and painfully funny. With Jackson’s “Control” providing the beat, the ensemble performed impressive unison hip-hop that opened into individually athletic feats. It was followed by a dancing-with-“boys” number as an awkward, one-sided groping session. In “Gossip,” teens entangled themselves in yards and yards of telephone lines. For Chapman’s “Fast Car,” they built themselves into a monster automobile that, predictably, crashed, leaving Mendoza stunned and bereft. In an achingly lovely courting duet, Mendoza gently reaches towards Aceves who keeps turning away.

The third movement — “Herself” — opened with a video of the Michigan Womyn’s Music Festival and rather unfocused dancing on stage. The pace picked up with mock taiko drumming to recorded drum. Another playfully confrontational scene involved a boom box, one set of headphones, and Mendoza and Aceves’ different musical tastes. They come to a meeting of minds and take it from there.

The tribute to Club Q, as both a sanctuary for lesbians and a place for fierce dancing, is wonderfully evoked by Bush’s own fierce dancers. It ends in dreamy slow dancing duet for Witt and Bates. Choreographing anger is not easy. When Bush interrupted the lovers, her danced fury felt like an arrow shooting straight at them.

While Rocked‘s documentary clips are convincingly integrated into the stage action, earlier uses of video — shadowy images, dancers sitting as if in lecture by Judy Grahn, crawling from beneath the screen — are not telling enough. That needs rethinking. But Rocked is a warm, skillfully created, and generous show that just might become a Mother’s Day tradition. * sarahbushdance.com/rocked-by-women