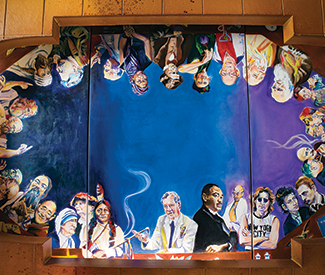 “I feel like I’m on vacation in my own town! I’ve literally never walked around here in the 12 years I’ve lived in San Francisco!”

I was excitedly telling this to Alex as we walked out of the West Portal Muni tunnel towards the Philosopher’s Club (824 Ulloa St, SF.415-753-0599). Sometimes you get stuck in a rut and feel like you’ve seen everything there is to see in San Francisco, and then one day, you decide to do something different.

I’d heard great things about the Philosopher’s Club for a long time, that it was a solid dive bar with friendly regulars and a cool staff. Also, when I’d written an article about SF’s writer bars years before, someone had gotten butt-hurt at me in the comments about not including the Philosopher’s Club, so I figured it had a literary bent as well. Because of all this I’d somehow built it into my mind as a dark, cave-like, candlelit bar, where old men screamed at each other about Dostoevsky and James Joyce. Of course, like nearly everything, I was completely wrong.

Walking in on Tuesday evening I found a well-enough lighted bar that had no cave-like tendencies at all. The Grateful Dead wafted from the speakers and instead of old curmudgeons arguing about Oliver Wendell Holmes, I found people a variety of ages watching a couple teams on TV doing hockey stuff. Helmets of 10 or so football teams sat above the back bar near a ton of SF Giants bobbleheads surveying the scene and mildly nodding their accession.

“It’s a fucking sports bar?” I asked Alex, who’d been there before. “I was thinking these particular philosophers would be closer to the Dalai Lama than to Yogi Berra” to which Alex simply pointed to the ceiling and said, “Actually the Dalai Lama is right there”.

Looking up I saw a big chunk cut out of the ceiling and in the space left over was a mural. The center of it was painted blue and ringing it were about 30 or so philosophers peering down on the patrons disapprovingly while we drank. John Lennon was looking directly at us, arms crossed. Mark Twain looked askance, refusing to make eye contact. And MLK whispered to Gandhi that he had a dream that one day Broke-Ass Stuart would be able to walk out of a bar not completely shit-faced.

Okay, maybe I was projecting a bit, but it is a little weird to literally get looked down upon by the greatest minds in history while getting tanked. When Mother Theresa is keeping tabs on your bar tab, it makes getting a good buzz on a little awkward.

Or it doesn’t. The great thing about the Philosopher’s Club is that they actually don’t give a fuck. I almost wonder if the name is some kind of joke the owner started with his buddies like, “You know who are great philosophers? Drunk people, that’s who!” and thusly named the bar. Truthfully, I don’t even know. I forgot to ask the bartender because I was too caught up in checking out the old photos and death notices on the wall, singing along to “Sugaree”, and admiring that the men’s room had a trough.

That night Alex and I joined the philosopher’s club by getting drunk at the Philosopher’s Club and all was right with the world. I think it’s time I start exploring more San Francisco neighborhoods I never go to. Maybe your neighborhood is next.