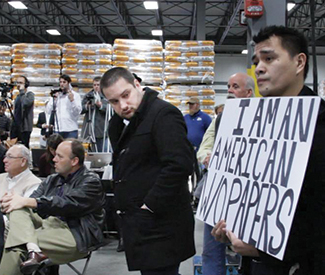 FILM Jose Antonio Vargas’ grandparents — who raised him in Mountain View after he was smuggled into America at age 12 from the Philippines — expected him to grow up, blend in, and live a perfectly ordinary life in his new country. He’d work a “menial job,” as both of them had, and eventually legalize his immigration status by marrying an American woman.

Thing is, Vargas was a smart kid who grew into an exceptionally intelligent young adult. He pursued a journalism career that earned him coveted reporting gigs for the Washington Post and CNN, among other outlets, as well as a Pulitzer Prize. He’s also gay, and while marriage equality laws are thankfully evolving, that fact complicated his family’s hopes for a traditional wedding (and subsequent green card). In 2011, weary of guarding a secret he’d shared with only a few close friends, the 30-year-old Vargas penned a powerful essay for the New York Times Magazine, revealing “My Life as an Undocumented Immigrant.”

Documented, his film with co-director Ann Lupo, chronicles the months before and after Vargas “outed” himself. It’s a highly personal story, especially when the film crew travels to Manila to interview Vargas’ mother. Their geographical separation (she can’t get a visa to see her son in the US, nor can he leave the country to visit her) has become an emotional estrangement so complex she weeps when he refuses to add her on Facebook. But Documented also taps Vargas’ Define American media campaign to broaden its message, interviewing undocumented youths affected by the DREAM Act and sharing in their joy when the bill — providing permanent residency to young, educated immigrants of “good moral character” — finally goes into effect.

Unfortunately for Vargas, who continues to push back in high-profile ways even after he’s declared his status (particularly poignant: scenes at a Mitt Romney rally, where a grandmotherly type asks him, “Why don’t you just become legal?”, as if it’s as simple as buying a car or getting a haircut), he’s too old to benefit from the DREAM legislation. He’s a “walking uncomfortable conversation,” as he calls himself in a lecture excerpted throughout the film; though he feels relief at having come clean, he’s still unable to make any traction in his citizenship quest. At one point, he phones INS (“Deportation. How can I help you?”) to see if anyone’s planning to clamp down, as if finally getting “caught” would be preferable to living in extended limbo. The only closure of sorts comes when Vargas reconnects with his mother via Skype, but there’s an undercurrent of helplessness to their computer-screen reunion that makes Documented‘s themes feel especially raw and urgent.

Back for its second year, the Himalayan Film Festival unspools over two days, starting Fri/16 in SF with Christoph Schwaiger’s Kamlahari. The rest of the fest, including Kesang Tseten’s Who Will Be a Gurkha, takes place Sat/17 as part of Berkeley’s weekend-long Himalayan Fair.

Kamlahari is a social-justice doc that would be right at home in the Human Rights Watch Film Festival. Filmmaker Schwaiger travels to Nepal’s Teraï region to investigate families that sell their daughters to work in wealthier households, an old tradition that persists despite the fact that child labor is now illegal. The girls are treated cruelly by their “landladies” and are deprived of education and medical care; if and when they’re allowed to return home, their home life may be no less abusive, and their relationships with the family members who pressed them into servitude are strained.

The film’s charismatic center is Urmila Chaudari, a kamlahari from ages six to 17. “My story is one of many stories,” she says, but she’s actually quite extraordinary: After pursuing her education, she became an advocate for girls in Nepal, rescuing them from bondage and working with NGOs to set up safe places for them to live and “find a way back to childhood.” Urmila’s dignified mien and mastery of English makes her an ideal spokesperson, and we follow her as she visits a human-rights conference in Norway and the UN in New York. “It is a first victory for us that everyone is hearing our story,” she says.

Boys in Nepal may be in less danger of becoming household slaves, but their options are also limited. Some dream of joining a special British Army unit, the Brigade of the Gurkhas, established in 1815 and praised for its heroism (and general badassery) in both World Wars. (These days, gurkhas fight in places like Afghanistan, for pay that well exceeds anything offered by the Indian or Nepalese armies.) If the title of Nepalese director Tseten’s film, Who Will be a Gurhka, reminds you of a reality-show competition, that’s not far off, since the film follows the grueling selection (lots of intense physical training, but brain power is also tested) as thousands of wannabes are winnowed to hundreds, then to just under 200.

Gurkha archives provide Tseten with black-and-white footage showing eerily identical selection camps held in decades past, but at just 75 minutes the director misses the chance to go deeper — more history and context, perhaps via interviews with current or retired gurkhas, would add some welcome perspective. Who Will be a Gurkha would also benefit from engaging with, rather than simply observing, its subjects. None of the boys are singled out enough for us to root for them; we learn about their motivations mostly via nervously-blurted answers during interviews with the selection committee, and their personal lives during random conversation snippets, leaving the viewer without focal points amid the film’s sea of hopeful young faces. *

DOCUMENTED opens Thu/15 at the Roxie and Fri/16 in Bay Area theaters.