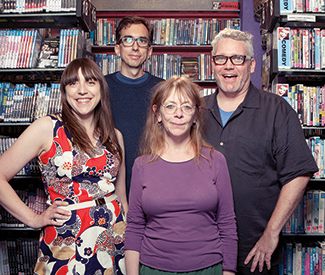 In March, Bay Area cinephiles were seized with alarm when Inner Sunset stalwart Le Video interrupted its usually upbeat Facebook feed with sad news: Due to financial hardship, the store — famed for its massive, meticulously curated film collection — would be forced to close in April after 34 years in business.

The announcement went viral, and a scrambling for wallets ensued; a subsequent Indiegogo campaign has raised over $44,000 so far. On April 15, Le Video announced it would be moving into the mezzanine of its Ninth Avenue space, with beloved local bookstore Green Apple taking over the downstairs area (it opens Aug. 1).

Catherine Tchen prefers to be called Le Video’s founder — in the earliest days of home video, it began as a single shelf in her photography supply store — rather than its owner. “It’s more like Le Video owns me,” she chuckles. “People think if you own a business, you’re making money, but Le Video has not been run as a for-profit entity for years. I haven’t had a paycheck in 14 years.”

The store’s name reflects Tchen’s Parisian roots, though the lifelong movie fan admits, “It should have been La Video! In French, video is feminine.” The misspelling was done so that customers would know it wasn’t a purveyor of exclusively Spanish-language films — and also because it evoked Le Car, a type of Renault popular at the time. “Then everybody knew it had to do with something French! Because it had me, and a lot of French movies, too.”

Le Video still carries beaucoup French and other foreign films among its 100,000-ish titles, but it also has a huge array of other genres: spaghetti westerns, documentaries, classic Hollywood, experimental works, LGBT films, rarities … the list goes on. The depth of the collection, Tchen says, is thanks to Le Video’s dedicated staff (“walking movie encyclopedias,” she calls them), including manager Mark Bowen, who fleshed out the shop’s legendary horror and cult sections. “The collection is a representation of different people who, through the years, have worked at the store, or are still working at the store,” she says.

Tchen, who lives in Washington — she owns the building that houses Le Video but sold her SF house 14 years ago, in part to keep the business going— is committed to keeping the collection intact, as well as “the tradition of the brick and mortar video store and the role it plays in film discovery, education, and social interaction,” per the Indiegogo campaign. The current financial crisis is a perfect storm of complications, including the overall decline of the rental biz. Bringing in Green Apple as a co-tenant will help, as will the Indiegogo funds.

“I was deeply touched,” she says of the reaction. “We have a core of people who really value what we do and understand that this is not about money.”

But the clock is still ticking for Le Video. “We need to raise twice as much to give people what they want,” Tchen says. More funds are needed for remodeling costs, a revamped website, and materials to display DVD covers for browsing in the store, among other expenses.

“When all the headlines came out, ‘Le Video Saved!’, I knew people would say, ‘Oh, it’s out of the woods! We don’t need to do anything anymore,'” she says. “We are saved. But it’s bare-bones, and it’s still a big challenge.”