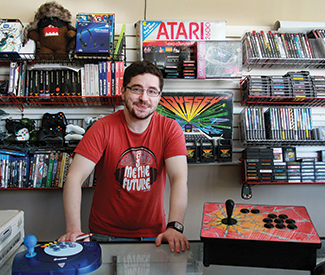 One of the original Internet viral videos, the “Nintendo 64 kid,” features a familiar Christmas scene cranked to 11. A pajama-clad brother and sister jointly tear open a wrapped box sitting under the tree, and the present spurs a sudden, joyous, but frighteningly excited squeal. “IT’S A NINTENDO SIXTY-FOOOOOOOUR!” the brother screams, at a pitch that’s not-quite human. “OH MY GODDDDD!” His eyes nearly pop out of his head.

Old-school video games line the walls, from the common to the rare: a Magnavox Odyssey 2 (circa 1978); the NES classic, Duck Hunt; a Sega Genesis CDX (built to resemble a DiscMan); and even an Atari Lynx (1989), one of the last console creations from the company that started the video game craze.

Gene Pereverzev, the owner, is humble about his store’s collection (first derived from his personal collection). Through trades and Internet hunts, he’s built a small arsenal of retro-gaming goodies.

For now, he said, GameShop Classic is a pop-up inside of his FixLaptop.com store on Taraval Street, nestled in the sleepy, foggy, Sunset District. But even a fledgling startup is worthy of note.

GameShop Classic harks back to a time when daring digital stories were lovingly told with pixels so few they could be counted with the naked eye. Pereverzev, 28, has high hopes for GameShop Classics’ future: Soon it may play host to classic video game tournaments (Soul Calibur! Smash Brothers!). He wants to bring the video game community together.

And should you want to re-create one of the Internet’s first viral videos, Pereverzev has you covered. In the window of his store sits an originally boxed Nintendo 64.