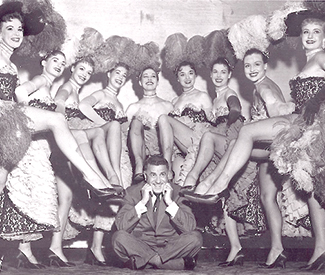 When Agostino “Bimbo” Giuntoli first arrived in San Francisco from Italy in 1922, the 19-year-old found work as a janitor and then as a cook at the swanky Palace Hotel. He likely didn’t think that, within 10 years, he’d be running one of the hottest Prohibition-era speakeasies in the city — where well-heeled guests came to drink, gamble, and watch a young Rita Hayworth dance in the chorus line. Even tougher to believe, most likely, would be the fact that his club is still in business, and run by his family, nearly 85 years later.

Bimbo’s 365, named for its owner (whose nickname was born of a boss not knowing how to pronounce Italian) and its original address on Market Street, is one of a dwindling number of family-owned businesses in San Francisco — and at a time when other historic venues like Café du Nord are shuttering or getting a yuppified overhaul, Bimbo’s seems (knock on wood) to be going strong.

“We work really hard, and we’re very fortunate to be where we are,” says Michael Cerchiai, who reopened the club as a live venue in 1988 after nearly two decades of it being available only as a rental for private parties. Soon after, Bimbo’s served as a hub for the burgeoning swing revival of the ’90s and the growing acid jazz scene. Erykah Badu played there on her first national tour, as did Fiona Apple; the last time George Clinton and the P-Funk All-Stars came through, Stevie Wonder showed up unannounced and sang too.

“We’re a tight-knit Italian family, so it’s a lot of tough love. We get things off our chest, and I think sometimes you can’t do that when it’s not a family-run business,” says Cerchiai, who recalls going to shows with his siblings when they were small children — back when the club was black-tie only. “We had a Felix [tuxedo rental] down the street, so we’d get dressed up and check out the show, and that was a way to see our grandfather and our dad.”

Michael’s brother Gino, and their father, Graziano Cerchiai (Mr. Bimbo’s 83-year-old son-in-law), are three of the seven staff members running the present-day Bimbo’s — whose stage has most recently seen Nicki Bluhm and the Gramblers, Flaming Lips, and the White Stripes, among others.

Says Cerchiai, “Having grown up here, loving music, it’s just gratifying to see people coming out, enjoying a show, and having a good time.”