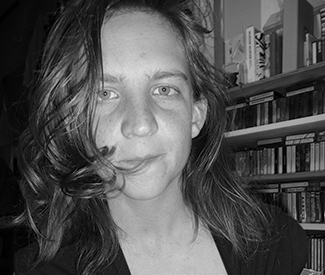 MUSIC Two bra-clad figures peek through a shroud of fog onstage that’s every bit as thick as the shrieking white noise at Oakland’s Night Light. The sound is a perfect accompaniment for the sadomasochistic display before the audience. One woman’s lips press against another’s flesh, but if you lower your glance, you’ll notice among the chaos that one is slicing a blade across the other’s stomach like a ritualistic-looking sacrifice. Blood is drawn, even though they seem to be intimately embraced.

This was how Replicant, the live music/performance/visual art series with a penchant for the weird, chose to kick off the new year at their January showcase; Bad News, an industrial duo consisting of Sarah Bernat and Alex Lukas from Los Angeles and San Francisco, respectively, headlined. On this night, they had also invited experimental conspirators Greer McGettrick (formerly of The Mallard) and Shannon Madden (Chasms) to join them during the performance. Madden said just a day before this gig that her relationship with Bernat had ended.

So was this arousal, anguish, or both? The audience, mostly in frozen silence by this point, was left to their own devices and had to interpret the definitive sensory overload for themselves. “We were bouncing a lot of ideas off each other, like ‘What can you do besides karaoke to your own music; make it transformative?'” said Madden, referring to conversations with Bernat, during a recent interview.

Bernat writes lyrics and plays guitar in her band and is usually tethered by her instrument, but she seemed possessed enough to become unleashed during this set. Somehow she maintained a straight-faced gaze throughout the cutting, even if she trembled a bit.

“It was totally emotional. We both knew that the only way to say goodbye was to do it on stage. I think there’s a reason why Chasms and Bad News are connected and I think it has something to do with suffering.”

pMadden said this was her last real interaction with her ex, but the two bands (who are on the same labels) will share a bill May 10 at Thee Parkside when Sleep Genius, the independent record label “born of the San Francisco fog” throws a showcase of its acts: Five mostly-local bands will give their own intimate and brooding examples of how new music is emerging from the underground — and what they’re doing to manifest a new direction.

There was nothing subtle about the bodies on stage that night in Oakland, nor the heavily-processed sound that came with it. Along with her collaborator, Jess Labrador, Chasms has a new LP, Subtle Bodies, due this June. Their live show is taking on a slightly different direction, sounding more blown-out and less concerned with pop-song sensibility time constraints. They’ve upped the ante on noise elements and are beefing up on drone.

“I’m using Alex [Lukas]’s gear. There’s a reason,” Madden said. “Alex is my shaman, oracle, and engineer.” She explained that the pedals she’s been using are not meant for her bass guitar. “It’s the first time Jess has ever kept a live take of mine and not edited it.” Labrador is the songwriter, vocalist, guitarist, and sometime drum programmer in this dark duo. “I could never do any of that without experiencing Alex or Sarah.”

Alongside a DX7ii synthesizer and other assorted gear, we’re huddled — Lukas, Madden, and I — inside his tidy Bayview District trailer. Other like-minded artists reside on the property, but his studio hasn’t been completely set up since he was priced out of his old 18th and Mission space, after his landlord raised the rent by 40 percent.

“The cost of living here is so high. People funnel so much of their money into rent,” he said. Having weathered two tech booms as an artist in the Bay Area — he’s been here since 1998 — Lukas knows what it’s like to sell CDs at Amoeba for “a brick of cheese.”

His dwelling is, nevertheless, a cozy hideaway, well-stocked with cassettes and a pretty chill black cat. We chat about how his ties with Madden run deeper than just his influence over how she plays. For one, they spent much of 2013 together at the helm of The Lab, a long-standing visual and performance art space near 16th & Mission that has seen many incarnations over the years.

“There aren’t a lot of spaces like [The Lab] in San Francisco anymore. When Sarah and then [Shannon] kept it active with shows and performances, it sort of compromised The Lab’s role as a venue for visual art, but made it more important than ever as a performance space,” he said.

Under their collective watch, The Lab hosted a variety of underground or emerging acts, like Wreck & Reference, Some Ember, Austin Cesear, Marshstepper, Disappearing People, and Dorian Wood.

Madden claimed the types of shows she was booking weren’t “artsy enough” for a visual arts space to be left alone by the city’s Entertainment Commission. Finding a platform for these types of acts is, she says, the bigger concern in the current “cultural economy” in San Francisco.

“People work high-paying jobs that require their brain. When they get off work, they wanna get shitfaced and hear Toro Y Moi. They don’t wanna go deep in some experimental avant, industrial shit. They want their brains to be massaged and they want to go to sleep, wake up, do it again and eat some fuckin’ food-truck food.”

She notes Oakland is sustaining as an impressive platform for the underbelly of electronic music. “They have a fortified interest in outsider stuff.” She hopes the culture in San Francisco shifts underground again, but in the meantime is happy to book at more traditional venues including Brick & Mortar, The Night Light and Elbo Room.

“It’s not about the space, even as intimate as it was. I want to give the local bands the best deal that I can and not risk it getting broken up. Lots of rad shit’s going to have to happen in a bar space.”